…so with this being said, can Iron Galaxy finally look into Ranked Leagues and counter act the players who are blocking people?

I’ve suggested Win Streak Bonuses in the past. The higher your win streak is, the more points you win. Ranked needs to be about the best of the best (Win Ratios) since they are getting points to qualify to fight the best of the best next year in the KI World Cup. It shouldn’t be based on points alone because anyone that’s close to the top or always at the top can easily block the good players that can beat them free and force them to grind harder (more fights) just to earn enough points to try and make it to the top.

Also,right now as it stands, the highest possible amount of points anyone can get is 1,000 points. That comes from a Killer set win if the player is relatively low in the leaderboards and beats someone who is closer to the top spot. When these so called “top players” are already in the top yet block “pro players” , they make it hard for the person being blocked because now they can’t get these bonus points as easily as everyone else and have to deal with 50 points a win. At 50points a win, you have to grind harder (play more matches) which means more time spent playing. Not everyone has all the time in the world to just grind Ranked all day like some of y’all do either.

Lucky for y’all, I’ve taken the time to help validate my reasons behind this statement. 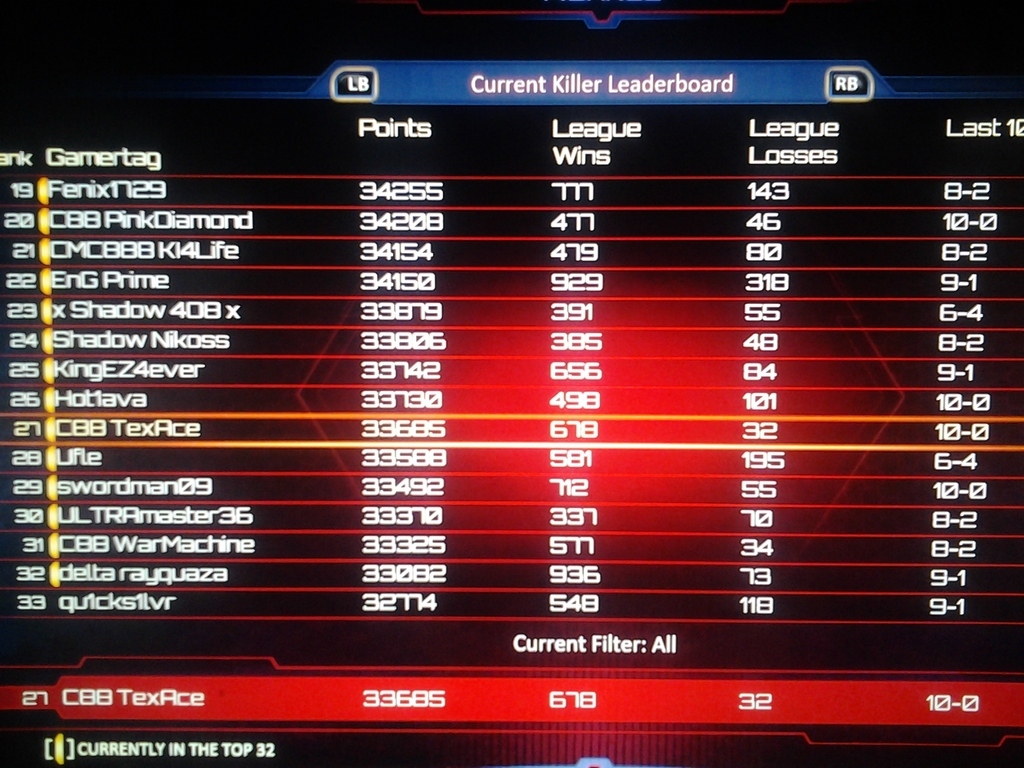 The image above is my Record for the month of July 2015 using my main account. I had a win ratio of 95.49% with a total of 710 games played. People recognize my Gamer Tag yet lots of them have blocked it. I strictly used Glacius all that month too. I played Ranked for about 3 weeks that month a few hours each day just to get into the Top 32 for July 2015. I had to play so many games, despite my win ratio being the best in the World for that month, because I could only win 50 points Max.

LCD then announced that the month of August will have a pot prize for the Top 32. This was 2 weeks into August too. I said it’s not fair that he announced it 2 weeks into the month when 1) Hardly anyone was playing Ranked because they were busy playing with Rash (who is not allowed in Ranked) and 2) Players that block us force us to play more games and automatically puts us at a disadvantage based off of time/time remaining alone. We went back and forth and eventually I said “You know what? I’ll just make a smurf account then to show y’all how flawed Ranked is.” That’s exactly what I did with less than 2 weeks remaining. 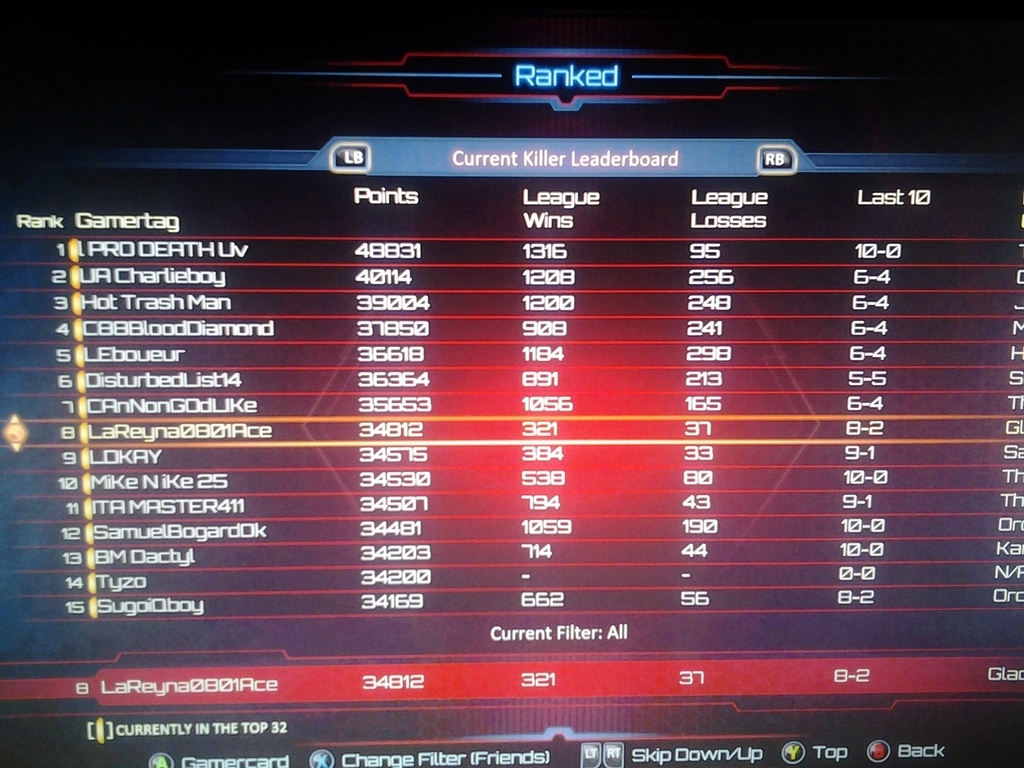 This pic above is my wife’s Gamer Tag. She plays CoD and some KI. I told her that I can get her a star on her account with less than 2 weeks left. I LITERALLY PLAYED 6 DAYS for a couple of hours each day. In those 6 days, I managed to get to #8 in the Leaderboards while balancing my time playing the CoD Black Ops 3 Beta too. I’ve never been able to even get that high PLAYING ALL MONTH on my main account. I used a mixture of Glacius and Cinder those 6 days. I played 358 total games with a win ratio of 89.66% and still got Top 8 and placed higher than players with 100’s of more Wins alone than myself.

I was able to play lots of players that I never get to on my main account. I was taking their points 1,000 at a time. It’s all because this account isn’t a “known” one either so no one knew what to expect. I played everybody you can think of too and received 1,000 points each time. I remember too that by my tenth win on this account in the Killer tier, I was already at 4,500 total points.

This just goes to show how flawed the system is and how bad it affects ‘known players’ who get blocked. How can we legitly try to get these points when everyone that blocks us forces us to grind more than they do?

I love it when someone actually does their research and presents evidence in order to make their point. Good read, Tex!

I’ve been saying it’s broken for a long time now, although not for the same reasons as you. My reasoning mostly has to do with how easy it is to go up in rank based on disconnects alone simply for having a poor connection like mine (in other words, not doing it on purpose, like some people have a tendency to do). With only 2-3 days of play for about an hour each last month, I was within or near the top 100 (or 200 - my memory’s a bit fuzzy, but I’m sure the devs can check the data for confirmation) simply from disconnects that I had no control over (and for the record, I routinely disconnect from ~ 1 out of every 5 matches or so with my wired 6mbps download and 1mbps upload w/~100ms ping for latency).

I can totally relate to you on the internet speeds. Two years ago, that’s pretty much all they offered here too in my area. If you ever watch the Verizon commercials and look at their map of the U.S. where it’s colored in red, well I live in the non-red area of Texas. It was horrible lol.

But yeah back to the Ranked topic. I’ve always figured that as a player who gets blocked , you are forced to play more games to make up the points difference you could’ve gotten if you weren’t blocked. I made a prediction of 250 is all you needed at a win ratio of 95% if you weren’t blocked by anyone to make it to the Top 32 at the end of the month. My prediction was pretty close due to myself slacking up and only winning 89.66% of my matches but that was for bare minimum or # 32 itself too. These results got me to # 8 so I’m happy about that too.

Well I talked to Brandon (owner of Ultra Arcade and host of the KI World Cup) about this issue the same day I created this topic. It’s cool that we know each other personally and he even said it was messed up. He told me he will talk to James and Adam ASAP about this issue.

Just never posted it because I was hoping for more of a discussion from the community but I guess no one else besides myself, GalacticGeek and Brandon seem to have any concerns/opinions about it.

I’ve never been a fan of the catch up mechanic either. It devalues the work that people put in all month just for someone to come in the last week and get 40k points because all they play is Killers who are super high.

The problem of people blocking high level accounts technically isn’t a problem because they have less people to play thus making their time even harder. If they really wanted too they would have to find a way to code around the built in block system in place by XBL and make it so you can be matched with anyone blocked or not but that would cause all other sorts of issues.

The reason this problem exists is because the system is solely based on points (amount of time played) instead of other things combined as well like win streaks, character usage and trueskill.

What if they somehow reverted back to S1 but with a mix of S2 . I just thought of this just now and let me help elaborate on what I mean exactly.

Season 1 was pretty straight forward (with the exception of the Jail system). You were pretty much paired up with players within a few Ranks of your own. Sometimes you would get + or - 10 Ranks from your current Rank as well. You can see your progress from each win/loss and had the option to derank yourself.

So Season 2 is all about points essentially. There are other tiers yes, but killer tier is where it really matters and where your points actually hold some type of value. You’re not technically deranking yourself but in a sense derank yourself when it comes to the points themselves. If you win , you win points and move up the placing latter and vice versa.

So what if we went back to titles where S1 Killer (level 40, which was the highest Rank possible) was equivalent to Top 32 Killers. What I mean is that only 32 people will have the Title Killer or whatever they wish to call it. They can add lots of tiers below with titles of their own instead of just having them go by colors, like Silver and Gold then your Qualifiers.

What if their was at least 10 or more tiers but all still were based on points. You would need this amount of points before qualifying for this tier and so forth.

Keep 2 out of 3 for the second to last tier but for the final tier (your top 32 tier) there needs to be a twist. Make it something like giving the option for Double or Nothing or maybe even a Points Gambling system. That way when you do make Top 32 Tier and face another one in the same tier, you can either Win a lot of points and push yourself further up and possibly make your opponent fall out of that tier too or yourself can fall out of that tier from losing a lot of points.

I don’t know. Something needs to change to prevent people playing last minute and beating everyone who has been playing all month and getting a lot of bonus points to only surpass them with fewer total games played as well.