I purchased KI at launch for the PC this year. I’m primarily a Jago player and am recently starting to branch out into Thunder. Usually when I lose to a player it’s because I wasn’t patient enough at the footsies game, my bad habit of wind kicking into a blocked opponent, or flubbing my combo breaker: something happens and I know where I went wrong. I may not be able to beat that opponent, but at least I know.

Not this time. Tonight I played against a TJ player in exhibition and I was wrecked. WRECKED. We switched up characters after one match and I destroyed his Mira a few times with Jago, but once he pulled out TJ it was all over.

He was doing this super aggressive move set that I haven’t seen anywhere else. It seemed to be Shoot Toss, LK flip-out, back dash, Shoot Toss, recapture or flip-out… rinse and repeat. And he was good at his mix-ups throwing in MK sometimes rather than going for the flip out. I was at a total loss. I couldn’t even consistently break the LK. I think one time I took off his first bar. The triple ultra and propensity to tea-bag didn’t help either. It was as though I couldn’t even react because he was hitting me before I touched ground after the flip-out.

Any advice for dealing with this set up?

While I’m not a Jago player, I can offer some general meager advice for when you find yourself in this situation, and perhaps similar flipout-vortex situations.

Let them catch you with the flip out, and put a DP in their face as you touch the ground - you can even buffer it during the flipout right before you touch the ground. If it connects, it could make them reconisder the vortex. Keep an eye out for the juggles/recaps and break accordingly. And, of course, be wary of counter-break baits. But your DP should have an impact on their ability to abuse you with the resets.

Flipout>Back Step could make the DP whiff. HP DP might work when you sniff out the Back Step.

Also, backdashing could get you out of the Flipout>Shoot Toss scenario, while possibly netting a combo punish. If you can hit the lab with these things, or arrange a practice set against a competent TJ, that would be ideal.

Hope this helps! If not, whoops!

Lol. Was it me? Nevermind. I never triple Ultra or tea bag. But I have a similar Style to his if you want to spar with me now.

Thanks for the advice, Morning. I’ll give DP a try. Maybe it was just happening so fast my brain couldn’t keep up. I think I read on the KI.Infil site about buffering and that seems like a good way to punish overly aggressive players. Maybe even Shadow Laser Sword since that has front invincibility.

Being flipped out gives invincibility to throws as well, right? Maybe he was just back dashing for timing more than anything else.

oShift, thanks for the invite. I’m definitely willing to have a few matches against you when our schedules line up!

Flipout provides complete invincibility until you land. You can always act/block immediately after getting flipped - in other fighters it’s an air-reset, same deal. The idea is that it happens quickly and defies the defenders expectation of a juggle/recap/knockdown, providing an advantage to the offender for their mixup attempt. The backdash/ Back Steps were either for timing or to add a layer to the vortex by making you hesitant to challenge for fear of a whiff into counterhit, thus conning you into just taking the mix-ups.

Sucks that he was Tea bagging and 3x Ultra after all that. I can stand people that do that when they are obviously superior in the match.

My advice would be use more Laser sword and light ht confirms before your special openers on offense and on defense…neutral jump to avoid shoot toss.

Who was this guy?

I hate it. I rarely do a full ultra – let alone a double – and even then only against players that spam taunts and went over the top and did a double ultra the match before. I just want to get on to the next match.

Are we okay with posting account names on the forum? I suppose I could PM you.

No you cant post there name. But you can PM it or just post the video and everyone would see it. I guess posting it is ok if you are saying how awesome he is…but you cant post it and say “this dude sucks, everyone kick his ■■■!” lol

IM just curious who it is because he sounds really awesome…might could learn something from him.

TJ’s got some REALLY nasty stuff now. He may be this game’s first vortex character. I’ve played a few TJs that will whiff the first hit of his chain combo and, whether or not the second hit is blocked, they do shoot toss into flipout. Then they might roll to the other side, hit you with his stagger, into shoot toss again. Or stay the same side and grab you right away. Lather, rinse, repeat. It’s really fast and difficult to escape from. Plus with all of the resets, your health bar disappears before you even notice it. 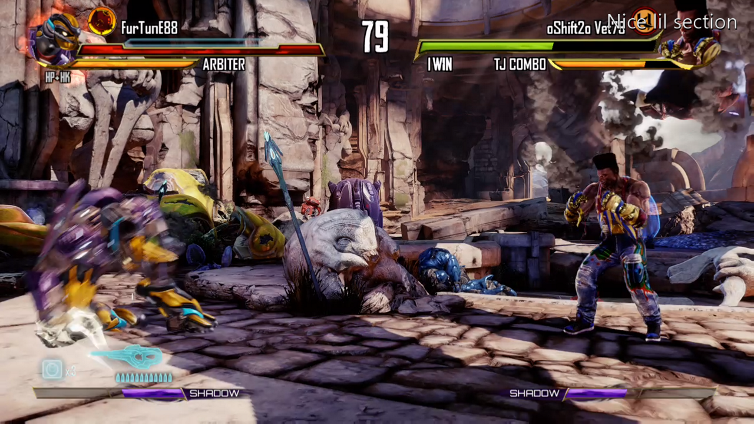 LOL, yes. It’s SICK to watch, unless you’re on the receiving end

Yeah, I’m not really sure that I can’t even defend it. Defense is my weakness, considering that TJ doesn’t have a strong wake up as well…Double whammy for me.

Since we are talking about what to do against TJ, what do you do about his command grab? I can successfully block but then he like cancels into that grab, so should I just neutral jump after I block his strings?

Yeah, best way to deal with insane flipout reset shenanigans is to DP your opponent in the face the instant your feet touch the ground. It’s not great to do this ALL the time, necessarily, but it is wise to at least show the option from time to time just to give the guy something to think about. I personally think TJ has some of the nastiest flipout shenanigans in the game - you’re not going to block it right all that often unless you’re familiar with that TJ’s style, and he’s got enough flipout options that breaking the LK can actually be pretty tough. Throw out the DP so that he has to think about it, and hopefully you’ll be able to use that time to reestablish yourself as he tries to bait out another DP.

@Blade4693 - yes, you’ll either have to jump or poke out of that tick throw setup. It’s doable if you’re looking for it though, as shoot toss is a relatively slow move all things considered.

Unless you don’t have a DP. Then you just panic and hit buttons trying to guess break something. lol.

TJ has the ability to combo into his shoot toss now.

Lol we just need a "Ask @STORM179 " thread on this site, you always have the answers dude. Thanks man!

What you do is pick Mira, get flipped out, mist away making his reset attempts completely useless mwuahahahahah

It’s definitely nasty stuff. I don’t want to say it is OP and that TJ needs to be nerfed (although that would help!). I’m just not familiar enough with him. I came across a pretty awesome TJ player last night. We did 6 games before I had to call it quits and get to bed. He won 4 to 2 with each of us taking one game quite dominantly. For the others, they were very, very close. One counter break not missed or one combo not dropped could have swung the matches any way. And yes, the DP to the face tip certainly helped.

I made sure to message him about how great the set was since I didn’t have my mic in.

After watching the Gargos stream they mentioned that… burf?

Man, was that needed? TJ has some pretty good tools already.