TJ took me to Silver :D

Hey guys, I just wanted to share my excitement and say thanks to everyone that helped me with good advice (specially @TheNinjaOstrich ) .

TJ is awesome, keep up the punching 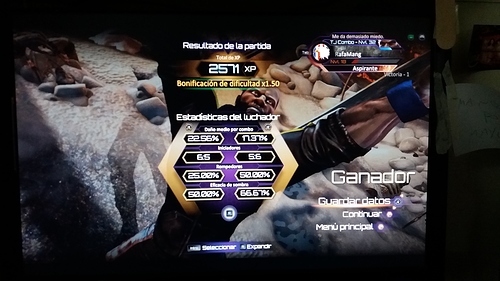 He is awesome to play with because he has a lot of fun stuff to work with, but he is pretty bad when faced against tougher characters.

Man do I love landing those punches with TJ, I almost can feel his massive hand punching trough flesh XD

TJ was the character that got me into Killer Instinct. I thought it was interesting but was never sure if it was for me. When I saw TJ on sale for a $1, I purchased him, played him, looked up his backstory and he’s been one of my main’s ever since.

He has to share with Arby now, but I’ve always liked teams of Mains anyway.

I feel you there man, he was my first character. Since then I bought Hisako cause I like her and now I’m thinking Aganos.

But man do I love punching my way to vistory, he is so cool and fun to play. And his comebacks, there’s nothing more satisfying than that Autorbbarage, even more exciting than the Ultra combo. Landing that last autobarrage punch is orgasmic

Keep playing with TJ, he’s massively underrated. I think he’s UBER GOOD but nobody mains him.

Uber good, if you put in the work. And it’s major work. One of the hardest characters to be effective with.

Man, TJ has been my main since day one. I love this guy XD

It just feels so good to be effective with him

Is like one of those high risk high rewrd characters, I’ve been enjoying getting better with him