This is making the rounds over at the sfv groups 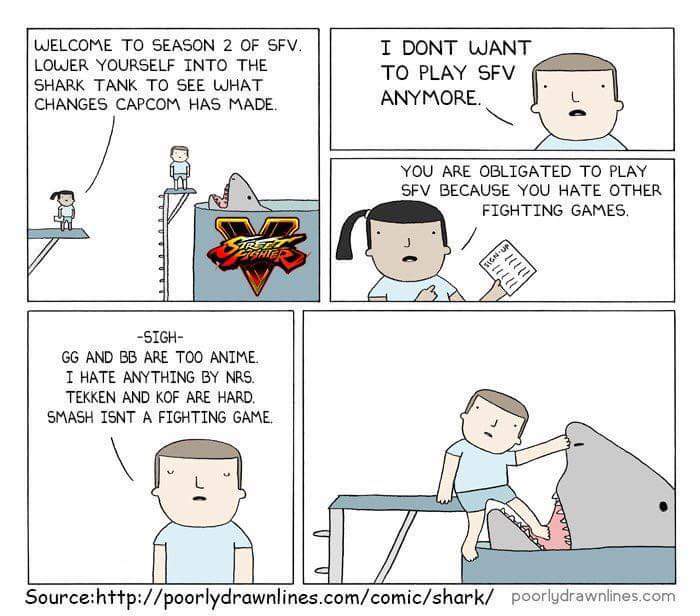 Why is KI not in the conversation?

(I dropped some pro ki wit in those comments, so it may have all changed by now, but for the sake of conversation, let’s assume this is the general social sphere)

This comic irks me so much. KI is a good balance between the heavy aggression and wacky gimmicks of GG and the generally grounded play found in SF. Why was it not considered?

SFV players would rather be eaten by Capcom greed? They also admit to being fighting game short sighted? And on top of that, as of late, not many would even praise one good thing about the game?

Later, homie. See you on the other side. Enjoy that swim.

Because it’s not available on PS4.

I know I bought the Xbone for KI, but that’s not enough to get people into it.
Everyone I mention KI to thinks it’s nothing but button bashing and has no real skill behind it, it’s a cheap MK clone, or just the look of it is off-putting or has crap graphics and so won’t even entertain the possibility of getting it, even when it was free.

So many people don’t even aknowledge the game. Even some big names in the FGC don’t want to tackle the subject of KI when questions about it get put to them.

First, thank you for the reply.

Because it’s not available on PS4.

Smash also got denied as a fighter.
It’s mainly the “attention” that’s the reason for it getting mentioned.

Most people hear the name Killer Instinct and say “What? What’s that?” or they out right shoot it down as not worth noticing.

We’ve been over this so many times before about MS not putting in the due care and attention we might feel KI deserves and after 3 years I doubt that’ll change.

Take last night’s tournament for example. Yeah, they had it up on the dashboard for the community calender, but it was apparently only 45 min long and wasn’t even clear when it happened. No timezone clarity and 45 min? What tourney takes 45 min?

Zombie’s last hosting of an online tourney and it wasn’t made clear on the Xbone’s own dashboard?

Back on subject: it’s simply not big enough to warrant front-row attention from even the MS bunch, why should the rest of the world pay it any mind?
Don’t get me wrong, I love KI. It’s the only fighter that I play, but I’m not blind to the fact that we’re small; small enough to go unnoticed by the wider world.

so you’re saying the reason KI is not even mentioned in the list because no ones heard of it?

Or rather, microsoft hasn’t pumped enough into its marketing to make it one of the usual suspects.

Not sure how much weight this can carry. KOF is on the list and i personally have never seen a KOF commercial.

Its hard to say what would happen if microsft gave KI the same 30 million marketing budget that Acclaim gave Mortal Kombat 1 back in the nineties, but in a list that includes guilty gear, blaz blue and KOF (if i mention these games to casual gamers or non gamers in particular, would not know what im talking baout), I don’t know that market awareness is the culprit.

Personally, i think its that :

A) of all game genres, fighting games are the toughest with the steepest learning curves. Its much easier to sit down and play smash or COD than it is to learn how to do a quarter circle. I’ve long stopped trying to convince friends to play fighting games because quarter circles are just so beyond what most people are capable of.

Many fighting game developers try to ease this by introducing things like “simple mode” or for us, “combo assist”, but ultimately it is limiting.

this leads to my next talking point-

B) The fighting game community is growing, but not by much as compared to other genres. Halo CE exploded the FPS scene on consoles, and everything else is history. Fighting games went through a prolonged “dark age” from early 2000’s to 2009. When the 2d street fighter IV reignited the fighting game genre, it brought in new people but a large portion of that community, if not the biggest portion, were people that were already into fighting games, and had been, up to nearly two decades.

This means though there was a market for them, there wasn’t much of a NEW market.

c) If the community is composed of gamers who’ve been at it for neqarly two decades (or more), then tradition is a factor. A lot of this community already existed and a lot of the community goes where the competition is. In the nineties, i remember a lot of friends saying (and im guilty of this as well):

“fighting games are boring. You fight ten people on a ladder, get an end card with a paragraph of story and thats it. Hardly worth $50”

(which, adjusted for inflation, was worth about 400 shares of Tesla today, because I got one present per year for my birthmas)

…Where was I? Oh yea, so for those that were into the scene, they sought out competition, and the competition was in street fighter. Street fighter is a game that takes a long time to master, and people were putting in the hours.

Fast forward a highschool diploma, a college diploma, and a couple failed relationships and we have the reinvigorated fighting scene today. But all these games are still hard to master, and the community playing those games can’t be good at multiple games anymore.

I dont think the general consensus is that KI is a bad game. Notice the list goes on to say why these games are bad. KI doesn’t receive attention positive, but more importantly, it doesn’t receive anything negative either.

So it seems the fighting game community is filled with human beings who are naturally creatures of habit. Learning something new is tough, scary, and frustrating. How many people has charbok or J gamer K teabagged who are steller SFv players, and dont want to earn back the respect that took them, sometimes, decades to earn? Its easier to say

“well no one plays this anyways” and return to the game they know, even if they don’t like it.

and my last point

a) Fighting games are the hardest games to learn, shying new people to the genre away

b) This keeps the FGC largely stagnant in terms of growth

c) Fighting games have high skill ceilings, and being good at multiple games isn’t as easy as it was before, as everyone’s skill level in the FGC is growing exponentially with the internet. People work hard to not lose at fighting games, and KI makes them lose, as they would have to remaster the new systems.

d) The oldest community is the most popular becuase it is the most active, and these 3 factors fuel each other and grow that one particular brand.

Keits thinks the thought of getting balls rubbed on your face is the only way to strengthen your mental fortitude, and thus weeds out those who can handle KI versus those weak ■■■ casual gamers who cannot.

And thus, when someone makes a comic incorporating all fighting games worth mentioning, KI is simply left out. Almost like saying “yea its good but…iiiimmmm tiiiiirrrrreeeeedddddddd… and I feel like winning today”

“I don’t like KI because combo breakers subvert my expectation of guaranteed reward for winning the neutral game and I don’t like change.”

Too long to fit in the speech bubble so it got omitted.

Comic made me lol, fwiw.

actually, can i change my answer to this?

I would say it was a combination of things that hinders KI’s popularity, but your point about player habits at sticking with what they know is definitely a good one. It proves that those comfortable with their fighters will not even get an Xbone because of the limited number of fighters.

I remember the decline of the late 90’s, it’s the reason I ditched fighters. Big coincidence that was around the time they went 3D.

Yeah, no news is good news is the best way to look at this comic, though I tend to view it as not worth considering. I’m a pessimist though, so it might just be me.

I really don’t think it’s that big a deal that KI didn’t get mentioned in this comic TBH.

Take last night’s tournament for example. Yeah, they had it up on the dashboard for the community calender, but it was apparently only 45 min long and wasn’t even clear when it happened. No timezone clarity and 45 min? What tourney takes 45 min?

so they are stupid?

Then that makes it even worse then, cause it would have been on when I went to the channel, but it wasn’t.

Wasn’t going to mention this as it has nothing to do with MS or IG, but even twitter waited 'til it was 4pm the next day to let me know the tourney started the night before at 11pm.

I will never understand the phenomenon of SF5.

How hard Capcom has to ■■■■■ up to get justice it deserves?

Well, every game on that list has a longer competetive pedigree than KI. I’m not sure how KoF is currently doing at offline events, but all of the others draw high levels of participants and/or have recent releases. I mean, you could be asking "why isn’t UNIEL in this list? Or BlazBlue?

I don’t think the author is unaware of KI, and I think the game is well known (if not well understood) within the hardcore FGC. But as much as I love it, I really can’t say it’s more popular than the games mentioned here. Add to that the Xbox One vs PC factor (although the PC port was supposed to “save” the game…) and you get this.

But to be fair, I wouldn’t go nuts assuming that this comic is some sort of FGC bible ranking legit fighting games.

So why are people discussing the fact that one guy that made a comic didn’t put ki in a small list of fighting games?

so they are stupid?

Those are your words not mine. But I do think the FGC has a tendency to make false choices, snap judgments, put a lot of energy into rationalization versus analysis and complain a lot. And the herd mentality is very strong. So interpret that as you will.

Well, every game on that list has a longer competetive pedigree than KI.

I mean, you could be asking "why isn’t UNIEL in this list? Or BlazBlue?

But to be fair, I wouldn’t go nuts assuming that this comic is some sort of FGC bible ranking legit fighting games.

So why are people discussing the fact that one guy that made a comic didn’t put ki in a small list of fighting games?

it is a random sample, so statistically viable.

it is a random sample, so statistically viable.

Sorry, what? You can’t do any statistics with an n of 1 - random or otherwise.

PS - yeah, I missed BlazBlue. So substitute Persona 4 Arena in my original comment.