So in case not all of you know, here around the small town of Prescott, Arizona we have a bit of a fire problem…
A wee little fire problem that’s burned about 4400 acres of land, destroyed a few of the outlying towns, and has jumped the highway towards populated areas. 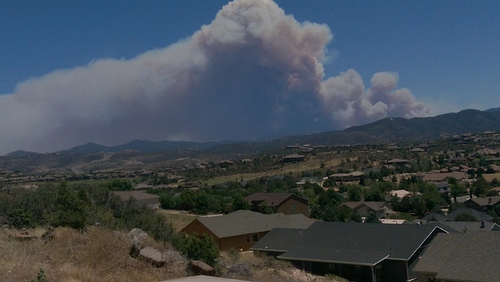 I’ve already had a few friends have to evacuate their homes, and one of them is probably going to lose a good chunk of their farm animals in addition to their property.

So to @Ziarist and any other Arizona KI players here, keep an eye out in case it gets any crazier.

And if I get any quieter about posting here than I already am… you’ll know why dudes.

please be careful! Hope it will be over as soon as possible.
This January we had a similar fire catastrophe in a close tiene and it was a disaster, but at least nobody died.

So that means Argentina has wildfires too overall, am I correct?

Well unfortunately we’ve only gotten worse news.
#18,000 god damn acres burned before sundown
More places are getting evacuated. I’m on the other side of a mountain so I have some time but we haven’t had rain in months so there’s a lot of dry vegetation.
@MaruMDQ Thanks for the well wishes. Hopefully the huge team of firefighters (there’s over 500 from across the state now) that’s been assembled can help. Fingers crossed that things work out okay.

They happen of stupid people doing stupid or careless things. The last big one was because they burnt leafes and the winds spread the fire =(
It was bad, but it will recover.

Looks like the help is coming to Prescott, and that’s good. All the help is needed in this cases.Best of lucks!

Be very careful too!

Oh that doesn’t sound so ba…

that’s burned about 4400 acres of land, destroyed a few of the outlying towns, and has jumped the highway towards populated areas.

… Oh…
Stay safe, Arizonians! Do not be tempted to take marshmallows and pretend its a really large bonfire. This week saw stupidity take enough lives already.

And if I get any quieter about posting here than I already am… you’ll know why dudes.

Okay, a good news update:
The wind and the heat have both died down, so the fore hasn’t been spreading as rapidly. The wind also seems to be blowing in a different direction, so the fore may turn back on itself and burn out without fuel.
Also, my friend seems to have managed to evacuate all of their animals, and the Navajo Brigade (one of the firefighter teams from the reservation just a few hours north) managed to keep it at least 60 feet away from his house.

Now that it’s been declared a state of emergency and smoke started traveling into town people got scared, but things are looking up so far.

Though I should also note this isn’t the only fire in the American southwest right now. We’ve got quite a few really big ones all over this part of the country.

Fwuf I am still worried about you.

But I’m glad the fire is settling down.

Be safe my man.

Glad to hear that!!

Very good to hear and it is good news indeed too, yes

Great news @Fwufikins. It sucks that everyone in your part of the world is having to go through that, but at least things are looking up!

thank god man, hope everything is ok for you and your family