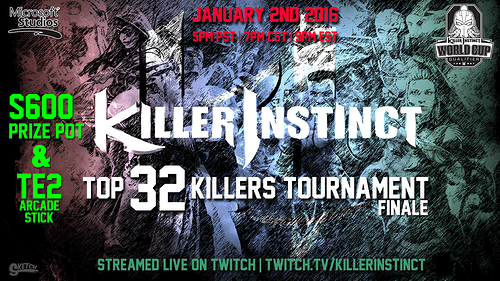 All good things must come to an end and the TOP32 Killers tournament is no different.

The final date for the TOP32 Killers tournament will be on January 2nd 2016. This one will be crazy featuring a $600 prize pot this time around and other prizes including a brand new Madcatz TE2 Arcade Stick and limited edition Xbox One controllers. Don’t also forget that this is the last online tournament that can be used to gain some last minute world cup points which top 16 can qualify for. There is still plenty of time to grind out those last few points for the month in ranked so make every match count and good luck!

I’ll make sure to watch this because I LOVE watching competitive KI, I am nowhere near good enough to even win in Ranked (been playing for just over a month) so I am not interested in participating, but can’t wait to watch it, good stuff and good luck to all those who enter the competition!

Cool, hopefully I can tune in and watch.

Any reason in particular you’ve decided to make this the last one? Too much work each month maybe?

Last one before KI World Cup, I would guess.

That or it’s possible there are changes to Ranked Leagues which would invalidate the “Top 32” format in some way…?

Someone tweet me a reminder when this goes live please, I don’t want to miss out!

Why aren’t the other Top 32 tournaments on Youtube? Is there somewhere to go to watch past events? I missed the last one.

This should start soon, so bumping up the thread. Come watch, especially if you’ve never watched tournament action before.

Thanks! Now to find the stream.

Saw some pretty hype matches. Almost alI of them exept the Kan Ra ones. I personally really dislike watching Kan Ra matches, it doesn’t look like KI to me.

Congrats to Sleep though but I couldn’t play Kan Ra and feel good about it.

My prediction is that he will win KI world cup too, him or maybe Rico.
After that Kan Ra will probably get some changes in S3;)