This doesn’t really bother me in any significant way personally but lately I’ve been hanging out on the Steam forums to answer questions and keep tabs on how the Steam release is going. So far, its going pretty well, aside from some baseless hate for various reasons people seem to like the game.

However there are a few issues I keep seeing come up… A lot. One being the lack of the KI classic ports, not a huge deal but people want 'em. Another is that Win10 owners feel entitled to a free copy of the Steam release. There are a lot people who are irked that there is no free-to-play option as well. Oh as well as a great deal of people who leave bad reviews being because they are having technical issues with the game’s performance.

But the biggest issue I keep seeing spring up is the lack of ranked cross-play. People are angry and some are refusing to buy the game on the grounds that it’ll be dead in a week without ranked cross-play. I guess I’m here because I wanted to know what to tell these folks, is it going to happen some day? Is it technically not possible, what are the reasons to segregate the population? Seems kind of counter productive to go to the effort of making the game cross-platform on all modes but one, arguably the only mode that hardcore people who intend to invest time into the game are going to care about.

As an Xbox player I have no issue sharing raked with Steam users, what exactly is the reasoning behind this? I’ve read the various Q&As and they aren’t exactly clear on the issue. Its hurting the games reputation on Steam so it would be nice to know if the plan to do this is going to be reversed at some point or having a reasonable explanation to give these folks who are angry and asking for refunds.

Anywho, KI on steam is great. I just gotta get a new controller that works on Win7 so I can fight on.

If leaderboards are the only thing standing in the way… I mean nobody actually cares about them.

I’m actually surprised too by the hate the lack of Ranked cross-play. I mean, I get it, but I’m surprised Steam users would care. In fact, I figured they’d be kinda arrogant about having their own Ranked ladders w/o having to mingle w/ the lowly console players.

But hey OP, I too need a new controller. the 360 pad just isn’t cutting it anymore lol (yeah, I’m a bit behind the times).

I’m in the opposite boat, I have Windows 7 and an Xbox One controller that isn’t compatible. So I need to find a wired 360 controller. :B

How does SFV deal with this? The only thing I remember is finding players trhough the game instead of using Steam.
But I’ve never got too much in that game, even I think it’s not a bad one.

I’m sure the KI devs could figure it out if they wanted to, I just want all of the KI playerbases to coexist. Its our best bet for keeping this game alive for the long haul and truly growing the fanbase. That is why we put it on Steam isn’t it? Leaving out Steam cousins out in the cold is no way to treat the new members of the family.

In fact, I figured they’d be kinda arrogant about having their own Ranked ladders w/o having to mingle w/ the lowly console players.

I switched to Win10 for the entire reason of playing KI, I wouldn’t have bought an entire console just to play one game I really wanted, I just don’t have the disposable income to be able to do that, so I’d rather upgrade my OS on my pc that I use for everything to be able to play.

I’m guessing many PC owners are following a similar logic line, I myself had my eye on the game since the initial release, hoping for a port to PC. Most PC players I know love the idea of united gaming communities via crossplay and have more of a “the more the merrier” attitude since we’re not really in direct competition with the consoles via stuff like exclusives, most games will ultimately, eventually find their way to PC anyway.

Especially for a genre of game that’s kinda niche these days.

There’s no SFV on Xbox so the crossplay is between PSN and Steam only. Seems easier. Having said that, Tekken 7 couldn’t pull of PSN x Steam crossplay either.

@NitricZenith yeah, I actually know what you’re talking about. Cross-play is becoming more and more desirable, whether it be for integrating communities in niche genres/games or actually wanting to test the competition across platforms.

I just figured some/most ppl who got it on steam were the opposite of you. They didn’t want to upgrade to Windows 10 just to play KI. In fact, I know that’s the case for some I’ve read on forums.

I was going to say that the Steam users were part of self-proclaimed “PC master race” constituents, but then I realized if what I said above was true, then they may not be part of the PC master race lol…

SFV has its own layer on top of PSN/Steam, and that’s CFN. That’s how they make it work, and that’s how it likely would have to work for KI.

its time to start deciding on whether you’re abandoning the steam version or not because no ranked play seems to have crippled this version of the game.

i remember explicitly seeing rukari state that it was a design choice and can be reversed. i encourage you to reverse it or the steam release will only hurt KI in the long run. think about how many people we got interested in this version of the game just to have to say “no crossplay ranked” then watch them either laugh or walk away asking why.

please. ■■■■■■■ PLEASE add ranked crossplay. i know you dont want this for the game and i know you can do something about it.

Unless there’s a leaderboard specific reason, I can see at least letting the players choose to allow crossplay or not, that way, folks who want Ranked with xbl can do so, and those who dont care will be unaffected. I do wish the exhibition had a 4 digit pin system, so steam folks can play in online tourneys, or simply connect with steam buddies more consistently

As someone who spends what lil extra time in my day available outside of work and family to promote this great game. I challenged a KI-on-Steam user when he said Ranked was dead on Steam. … I tried to find out for myself and got Ranked matches instantly. he said that was due to the 1/2 off sale and that it will be difficult if not impossible to get ranked matches in a few days after the sale. … … … he was right.

To further test this out, I decided to only play KI on Steam to get a feel of what Steam users were going through as win10/xbone users typically get ranked matches almost instantly. It turns out that the Steam user was absolutely right. A week or so later, whenever I try to play ranked matches on Steam (at least from 10pm-3am), I get no ranked matches. It’s a blessing we have crossplay on exhibition, otherwise you’d never get to play other human opponents online.

@snickerdoodle @developers @TempusChaoti @TotalJimkata - I promise I’m a HUGE advocate of the game. If this is a design choice as @NoximilienWakfu quoted below. Please consider reversing this. It could only boost the sales of KI on steam and help bring the entirety of the KI community together.

i remember explicitly seeing rukari state that it was a design choice and can be reversed. i encourage you to reverse it or the steam release will only hurt KI in the long run. think about how many people we got interested in this version of the game just to have to say “no crossplay ranked” then watch them either laugh or walk away asking why.

As I play KI on steam, it’s crazy to see the how one platform gets essentially no ranked gameplay and the other has a ton of life with their ranked gameplay option. I can now fully empathize with Steam users. Even if we, Steam users want to play ranked, we’ll give it a shot, wait a few minutes (if that), then just do exhibition. This means I can’t even get to Killer ranking now because there’s no one to play in ranked mode, so again, the next step for human opponents is exhibition. It’s a rough circle ranked mode on steam that seems like it can only be fixed by adding crossplay.

Thus, I would like to let you, the devs know my experience and as I look at the discussion boards on Steam and reddit there really has been many cases where people who’d like to try KI out now that it’s on Steam, but are scared to pull the trigger because their primary mode of play will look like this … 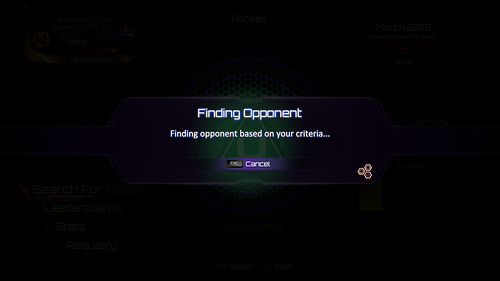 Thanks for developing KI on Steam and for hearing out this post. I hope you all consider adding crossplay for ranked for the good of the KI community! We are still fighting on!

I’m surprised Steam users would care. In fact, I figured they’d be kinda arrogant about having their own Ranked ladders w/o having to mingle w/ the lowly console players.

Not everyone on PC is Arrogant .