As I’m sure most of you are aware the achievements for Eyedol and Shadow Lords are already out, thanks to Trueachievements.com we can see the names and thumbnails of the secret achievements.

The Hatchery’s Secret
This one depicts what looks like retro Riptor in her Tactical accessory set on Orchid’s stage. 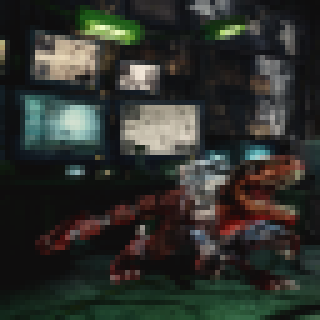 Infiltrator
This one seems like it is showing Sadira crouching in front of who I think is Mira in her Jack of Blades accessory set. 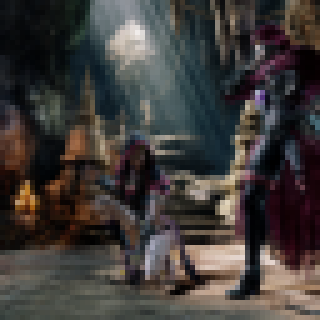 The descriptions for them just say “Continue playing to unlock this secret achievement” so its left to us to figure out what they’re for, that is if you’re impatient like me and are eager for something to talk about.

…Welp, my theory was incorrect lol

Yeah I was a little off base too, I’m not sure what to make of these actually. Obviously the Hatchery has something to do with Orchid and Riptor, maybe she finds something important there during the plot.

As far as the Infiltrator… Maybe that’s Sadira stealing info from Ultratech… for Mira?

Wait, didn’t an original riptor aka retro riptor supposedly run off from ultra tech and started her own little gang of riptors? Or something like that?

I smell potential new threats in KI2 then. Sadira, Coven, Kan-Ra. If any of them survive that is. As for the infiltrator…I reckon it’s mira infiltrating sadira’s hideout. I mean…mira is in sadira’s territory.

Yeah I think Sadira and Mira are going to have some kind of interaction.

They’re both underdeveloped characters IMO. They need more story to them.

Mad theory: similar to how Eagle was used to built a more sentient Fulgore and not a simple machine, Orchid’s father was used to make the Stalkers more inteligent, developing Riptor. Maybe one retro Riptor has the trapped conscience of his father.

About the other one, IMO Sadira was a double agent from the begining, working for the Coven as spy against Ultratech

Well no. You can view the descriptions on TA if you want.

You infiltrated the Cult of Gargos in Shadow Lords mode! (Secret)

Make of this what you will.

This just makes me more hype for Shadow Lords. So much new story to be found.

Weird they wouldn’t show for me, thanks.

Knowing it doesn’t come until fall is just a bummer. At least KOF IV will be out by then.

So I guess that means from the image that… Mira is in the cult of Gargos? Since Sadira was allied with Ultratech.

Guess that means sadira’s not all cold-blooded as I thought. Guess she still wants to play on UT’s side. I’m good with that.

I dunno if it has anything to do with the characters in the art. Can’t quite remember who does these, but I think they’re just cool shots that they’re able to take.

That sounds kinda pointless. Why take a shot of something random then stick a title on it when it has nothing to do with the picture?

Yeah, it sounds stupid. I went to look through some of the non character-specific achievement art and they all have some relation to the achievement itself, along with being funny poses or in appropriate situations (Shadow Survivalist has TJ pounding the ground, like when he comes back with Last Breath, for example). Pardon me, continue with the theories.

Edit:- @FengShuiEnergy I had my doubts because of the images. The Hatchery’s Secret is a picture of Riptor on Orchid’s stage with something about the Global Rebellion’s equipment cache? The base of the Cult of Gargos is Sadira’s stage and either Mira or Sadira is involved with them? Its a little confusing with no context.

No it’s just weird. I mean, if you were in charge, wouldn’t you match the pictures with the titles? Kinda fit the pieces into the puzzle?

I bet it will be explained in SL’s. It has to be. Wouldn’t make sense otherwise. To have these pictures as they are.

Sadira is part of the cult of gargos! I just beat glacious story mode and at the end sadira opens a portal and says her mission is complete! A portal for gargos! Lol

No that was under ARIA’s instructions.