Are you guys playing this?
I’ve played it non-stop for 2 days now. Man it’s addictive to swing through Manhattan. Reminds me of the days of Prototype, inFamous and Batman: Arkham City. Haven’t had this fun with a superhero game since Arkham City, tbh. It’s so good, I just wish there was MORE to do! Not that it is lacking at all, not at all… I just want more! XD

Also, I love this loading screen of Manhattan Island: 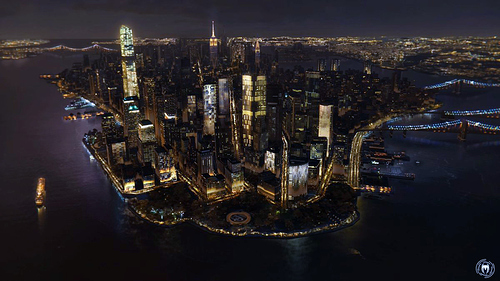 Beautiful…
The game is so much fun.

Spider-Man is the first game to release in PS4 that actually makes me want to own one. I always assumed I would get one at some point but I’m starting to think I will pass on it.

But I’m glad to know the game is good and I’m sure it’s going to make mint for the devs, which is great because they deserve it.

Heh. I’m actually thinking about buying one now b/c of this game.

Amusingly, another Insomniac game (Infamous 2nd Son) is what made me buy a PS4 the first time. If I get it again I’ll have to buy some more games this time so the thing actually gets some use

I really want to play it too, but after last weeks Bloodborne statue purchase, Ive had to show some restraint on purchases for a little while… I went to rent Spiderman an hour ago at the local video store and all 3 were rented out. If I didnt have Shadow of the Tomb Raider pre-ordered and set up for Tuesday night I might would get Spiderman. Im defintiely itching to play it right now lol

Ironically, I have maintained my PS plus subscription because I still have my PS3 gathering dust in a corner. I have been sporadically “purchasing” the free ps plus games for PS4 (when I remember to go on the app) so I would have a pretty reasonable library of games already if I picked one up. But like @FallofSeraphs76 I’m trying to be a bit disciplined. I could shell out for one but I would never be happy without the pro model and then I just don’t know that I’d get good enough mileage out of it to justify the investment. I just picked up a Switch, and I’m getting a lot of use out of it due to my lifestyle. I have a dozen or more single player, story driven title I haven’t finished on Xbox and there’s a reason for that other than “I just don’t like playing games,” lol. So adding a PS4 and a few of its single player titles to that backlog probably isn’t going to do much except make me poorer.

Still, Spider-Man is making me think pretty hard about it.

Think of a Jean Grey or Storm solo game set like this!

Anyway I wouldn’t have played it at all after 10.19 sonim waiting until a flash sale in 2019

Think of a Jean Grey or Storm solo game set like this!

I’m disappointed you didn’t include Psylocke.

That’s a given! I’d see her definitely as a co-character given the need for a huger female character solo entry!

I would LOVE to see Betsy in her own solo, more notably orchid for the tech / rpg / sci-fi slant a story can bring

I see orchid or avharacter similar to her original spy incarnation in a deus ex/ zombie/ multiple militant type game a;so thinking of the nightwing sub missions in Arkham game

Back on topic, the environment/ graphics in the new Spider-Man game look awesome, I hope this company works on the next possible ultimate alliance game

Welp, Insomniac got me again -shakes fist at cloud-

The game is good, and for a comic fan like me a lot of it reads as a love letter to people who truly enjoy who Spider-Man is as a character. There’s tons of little nods and references to get, and the game boasts an insane amount of polish in just about every facet. Movement and combat take some getting used to, but once you’ve got it down the game is fluid and fast and a visual feast. Insomniac really nails being Peter Parker and not just Spider-Man, and that’s something that really makes me smile as I watch cutscenes and play the game.

I never went back and played 2nd Son again after I beat it, but I can see myself going through this game multiple times

I ended up getting it Sunday night as well. Traded in 5 old games and walked out with it for $3.96.
I found it to be much more complex than I expected… my 7 year old loved it but he wasnt about to understand all the leveling up gear and scientific research puzzles lol

I had fun Sunday, but i didnt have the urge to play it last night. I went on back to my Horizon Zero Dawn play through. from what Ive read the game really picks up later on so getting there and understanding the skills and controls is paramount to fully enjoying the game.

I dont know if Id recommend @BigBadAndy to buy and entire PS4pro just fro this game though.

Loving it. It’s not like INCREDIBLE, but it’s just really good on most aspects. Dislike the parts where you play as Peter and MJ, but the god ■■■■ swinging is addicting and feels great (once you get the hang of it). GTFO with that fast travel. Besides the swinging I also felt the combat had a learning curve. Disliked it at first, but I’m pretty good now.

I probably wouldn’t buy a ps4 for it, but if you have it, it’s a no brainer.

I just finished the game’s story.

No spoilers, but holy fricklefrackle!

This is a good game.