So KI has been fully abandoned right?

Definitive Edition is out… yada yada… This game is finally over right? Lets hope for a sequel.

@snickerdoodle this kitten seems to think you’ve abandoned us.

Are we getting any new content this tuesday? General Discussion

If / when we have any major news about KI’s future, you’re only likely to hear it when that news coincides with a release soon following. As Phil said, we (Microsoft) are moving away from early announces for products that aren’t shipping soon after. So, if there’s ever some big announce, the good news is that you wouldn’t be waiting long from the announce to say a release, it wouldn’t be a lot of time. The bad news is that you won’t hear about it until it’s almost done.

Content is probably done but I wouldn’t say “abandoned” since there are patches coming to fix bugs and the kilgore fund money is still sitting around somewhere.

Call me a crazy conspiracy theorist, but I believe that the radio silence is ending very soon. We’ve got confirmation that there’s an incoming announcement regarding the Kilgore Fund, (and I love me some Kilgore!), but more importantly, I genuinely believe that an in-game thing is on the way!

“Why’s that?” You may ask, and you’ll get no spoilers from me, but everything that’s been happening in the first volume of the KI comic, (and this volume is sadly ending with issue #6!), the story is coming together in a way that I believe will carry over into Shadow Lords mode… Keep your eyes peeled around the middle of the month, and pick up the comic if you can- It’s about to hit the astral fan! 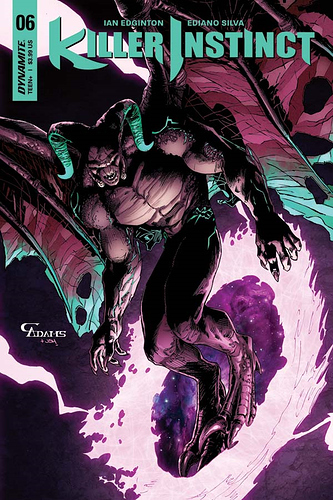 It would be neat to see cross-promotion of the game with the comic. It’s a nice way to tie-in things between multiple forms of entertainment.

Just to put an example…

2: MVC:I : Stand by, may recieve updates, may not, who knows

3: KI: Getting bug fixes and studing how to fix other non game breaking bugs, like outliner chars frame adv after a breaker. Now news about new content

Would be nice to be in “4” category, but considering that this is the oldest game I listed here, being a “3” in this list it’s pretty neat

KI has not been abandoned. MS is still working on the game and we are all playing it. The only thing that has ended is new content as in characters, modes, ect…

I really think they are working on plans for the sequel …just have to be patient and enjoy this version of the game for now.

Abandoned means no contact , no events, no bug fixes, no forums, no servers, nothing… we still have all of that and some.

Abandoned is a pretty loaded term. But I think it’s safe to say that there are no major changes planned for the game in the future - meaning significant new content.

Do people need continuous new content to keep playing a fighting game? A lot of games the community loves are past games that are finished (in some cases, games that never had patches at all).

I understand continuous support makes players “feel good”, like the game is still on the forefront of people’s minds in some way, but most fighting games can (and will) be played long after the developers stop supporting it. If you like the style of gameplay KI offers, then it’s still here and there are still many people playing it.

I know there is a shift in mentality in the FGC to mostly only care about games that get continuous support, but it’s a little dangerous to go this route.

Let me clarify, I don’t mean abandoned, like they’re being mean and have jumped ship, I mean the game is done and no more content and that’s that.

I would guess that, outside of crucial bug fixes, the game will receive no more content.

Agreed…I dont understand why its such a big deal to determine if a games dead or not based off of when the last character drops or if there is a balance patch. This is the time when a game should be at its best, a time for it to breathe and for tons of new tech to be found and perfected.

I know there is a shift in mentality in the FGC to mostly only care about games that get continuous support, but it’s a little dangerous to go this route

This is why i resent some of the nrs community for dropping their games just because a new game comes every few years.

Support the game you love. Not the hype.