Recently, i’ve been noticing a slow-down of games when I unplug my laptop from the wall and it uses the battery.

This never used to happen to me before.

I adjusted the settings to maximum performance on battery, in the Windows Power options.

I know how to set the power settings to give maximum performance, on battery, in the power options.

I know not what you speak of here. I see no such options anywhere…

How old is your laptop? What programs are running in the background when you’re playing? Laptop performance diminishes after periods of time, not to mention depending on your usage so have it looked at, maybe you need to get it serviced.

Understand that the game runs fine on the lowest settings, while plugged into the wall. I can even play ranked matches.

It is when I unplug the laptop from the wall, that the game slows to a crawl.

I set the power options in Windows Power Settings to give maximum performance on battery, but it isn’t helping.

I didn’t have this problem when I was playing Street Fighter X Tekken or other games that needed to use my GPU before.

Not really sure what’s happening then… i’d still suggest you take to a store and have it looked at.

You might have a gaming laptop that is equiped with more than one video card. When you are on battery, it’s not going to use your NVidia card (or whatever card) to save power and even if it is, the framerate may be capped to ensure your battery does not run out in 2 seconds.

So the only way around this, is simply to play only when plugged in.

You may want to check in the control panel of your graphics card to be able to control what card is being used by what application. Setting it to the lower end card, may improve performance. On my laptop, the framerate is capped to 30 frames when using the NVidia card on battery.

If you have an NVidia card, it looks like this: 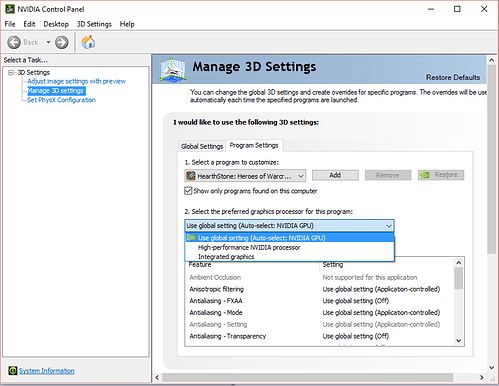 Finally, someone on the right track.

Yes, clearly my laptop has a discrete graphics card, and NVIDIA Optimus technology.

And putting Killer Instinct to run on integrated graphics, is just not the solution.

It DOES actually improve performance slightly, but KI is still slow on integrated graphics, and ranked play is out of the question.

The problem is not the option you are selecting, it in in the list below… but under the first tab, the global settings tab. 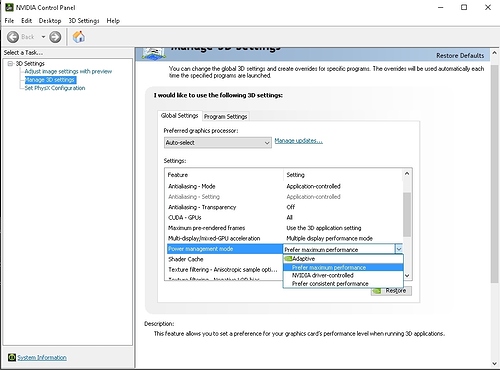 Adaptive is set by default, and it lowers performance when you go on battery.

I set it correctly to ‘Prefer Maximum Performance’…

But something still overrides it. Performace still drops.

I am reading up on it and it seems other people have this issue.

Yeah, my laptop does the same thing, it’s one of the downsides I overlooked when opting for a gaming laptop. I don’t think there is a way to make it go full performance when on battery. I can’t seem to get past the framerate cap with the NVidia GPU, it’s probably a builtin hardware limitation. And it’s really noticeable with KI.

Even if you got it to override it, your battery probably won’t last long enough with it to be usefull. Those higher end NVidia cards use up a lot of energy, even when idle.

But keep the thread updated when you find something, I would love to be proven wrong on this.

Out of curiosity, if it runs fine while plugged in, why not leave it plugged in while you play?

I guess I just don’t see someone whipping out a controller and laptop to play KI on the subway or a park bench lol.

Exactly! It is possible! Imagine how i’ve been living.

I whip it out on the beach, on the block, waiting in line at some interview, wherever.

When I have to take a seat and wait for something in some office, I grin to myself inside. When my turn comes up, it’s always too soon.

I used to do it with Street Fighter X Tekken, Shank 2, and all other kinds of high powered graphically intense games.

I have an extended capacity battery, that’s twice the size of the normal battery for my laptop, and it props my laptop up on a slant, which is good for cooling anyway, but yeah, so orignal battery, plus extended capacity battery. Plus I also have a power bank strong enough to play KI for about 2 hours, which still works because the laptop thinks it is plugged in when I use the power bank…

But what about my batteries? This isn’t cool.

I think it may have always been there, just that the effects are a lot more noticable when playing KI since the gamespeed seems to be linked to the framerate. When it caps the framerate to 30 frames, the gamespeed also drops by a factor 2. Normally, a game running at 30 frames is decently playable (assuming your laptop also caps to 30 frames per second with your higher end GPU on battery)

It seems they are looking into the whole framerate issue. When a rig renders at 120 frames, the gamespeed is also doubled. KI just insists on drawing 60 frames per game second, not more and not less.

But the settings and what card is used for what application isn’t always clear. I recently installed Black Desert on my friends laptop and the NVidia GPU wasn’t even visible in the game settings. And it runs very good anyway. So maybe, when a game thinks it’s running on the lower end GPU, it may bypass this limitation.

If I had known I wouldn’t have bought the extended capacity battery.

Sooo… ‘NVIDIA Powermizer’ is the culprit.

Is there any way to disable this on battery?