We need the slug character they were working on for ki2! He should be are 9th bonus character! He looked so bad ■■■ and could have a crazy move set! Like climbing into his shell to roll at people!!!’ 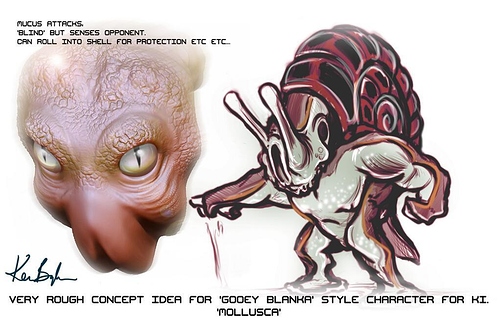 …hmm…seems like it’d be kinda odd…I mean what would his moveset/characteristics be? I’d see sliding around, maybe snot projectiles/ goo traps…armor against mixups maybe?

He’d have major issues with salt…

As far as Snail character go Id Mount some machine guns on it, and have it have an extremely low mobility no jump, no Dash very slow walk speed(slowest of the cast). Overpowered close range attacks and uber fast bullet hail style projectiles. and… a roll… maybe

Even if they did make such an outlandish character (which I personally think is actually kinda cool), what would his retro/premium accessories be based off of? What kind of cultural references could this character make? A snail-like creature with graffiti on the shell? I like it!

What would such a creature be called though?

heck no. Yeti from Ski Free is where it’s at.

It’d be funny if they used the TJ Combo “Cyborg” graffiti on his shell…and for the retro the dog image that kept poping up in KI classic:

…this is the first quick image I could find…it’s between the 2 fighters in the window:

He’s be the bonus character so no retro just himself. He could use his shell to roll around the map to move fast. He could suck people into him and use goo traps.

They could have his shell be different things, I suppose - for example, it could become a giant monster wheel tire or something.