Should season 3 have a game pad rumble option?

hi guys i asked Adam on twitter whether ki could have an option to turn on/off game pad rumble/vibration.

this is what Adam said… 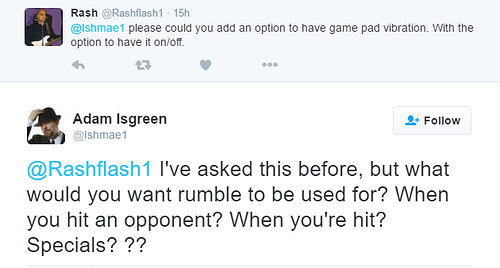 what do you guys suggest?

Enders would work. Also special moves. Also during an Ultra/Stafe Ultra per hit.

Rumble in a fighting game always felt odd to me. Heck rumble in any 2d game just doesn’t make sense to me.

Use the rumble for shadow move breaking training or manual training.

That way I could actually make sure what the time is instead of thinking am wrong all the time.

Rumble in Mortal Kombat X is well executed, maybe similar things - when you get hit, timing a lockout - vibrates every second for the timer, for moves like the hype beam/ultimate/ultras… It would really add something especially if it was a toggle.

Ultra’s would be cool. To feel the beat of the ultra through the controller.

Never thought about it.

I know many people who turn rumble off in FGs, but I’ve never minded it. At the same time though, I don’t need it or even think about (apparently) since I’ve never realized that KI DOESN’T rumble until just now.

Anyway, If rumble was to be added, it should be when you take or deliver a big hit. Enders, Ultras, Ultimates, etc.

I’d like it for places where it doesn’t interfere with gameplay (ie: Match is not yet started/already done or situations where no input can be made). So for example stuff like intros, outros, ultra, ultra ender, combo breaker, counter breaker and instinct activation.

What would we want rumble to be used for? I’m not trying to sound condescending here, but what is it always used for in other games?? Emphasis of actions in the environment…Make hard punches feel harder, things that recoil feel recoilier, stuff that is rough feel rougher…it adds an extra level of immersion & understanding of what’s going on in the game environment. I mean I understand you don’t want vibrations to get in the way of precision control, but on the other hand there are so many other games that struggle with the same issue & don’t even question why it’s there & just put it in.
It’s one of those things that has baffled me about KI, along with the haptic button on the KI TE2 stick that doesn’t do anything…why is having basic force feedback something that anyone even questions in this day & age?

So in short…yes It should have force feedback…& something to make the haptic button on the KI stick actually do something.

Haptic on TE2 for the LEDs lol

The rumble doesn’t need to be in during the active part of the fight. But both players should get rumble (and haptic feedback for the TE2 please!!!) in time with the hits of an ultra. Please please make this happen. It would be so cool and I’ve been dying for this since S1…

I’m not saying make the rumble really intense to where it gets in the way of the game, but something that emphasized events like hard knockdowns, enders, wall splats, etc. would be nice…make those impacts impactier…

Although, like I said before, hundreds, possibly thousands of other games have been using rumble features in games over the past 20 years to the point that getting in the way of precise control should not be a factor. I mean look at Halo…there are so many different little bumps, shakes, & vibrations that happen all throughout the game, & not once in any of its iterations did I ever feel like my control was compromised by excessive rumble. & on top of that just because one or 2 fighting game devs don’t know how to use it properly, does that mean MS/IG can’t?

If it doesn’t bring an unfair advantage to the table WHY NOT?

I’m pretty much pro “adding more” options when it comes to games, as long as it doesn’t present a unfair advantage for players.

I would like to see how KI feels with the ever so hyped “enhanced rumble” of the xb1 controller just to try it. If it feels good, then use it, if it throws my game off then toggle it off…

I honestly don’t know why this is even a debate…

I’d have to think about what it would best work for, but I really like having rumble when using a pad in general, and fighters are no exception. Maybe I’ll have to break out some old fighters with pads.

Off the top of my head, I like it for big damage or more impactful moves and knockdowns.