Hi I play KI on xbox, I seem to be having a very weird problem where every single character in the game is unlocked and playable however when it comes to Shin Hisako she’s the only one I cannot select and I used to play her a lot. I know I should have her as I bought her and both on game add on and the store it says “This product is installed” but in the game I can’t play as her, it always sends me to the xbox one store. I tried uninstalling and reinstalling but still the same problem. 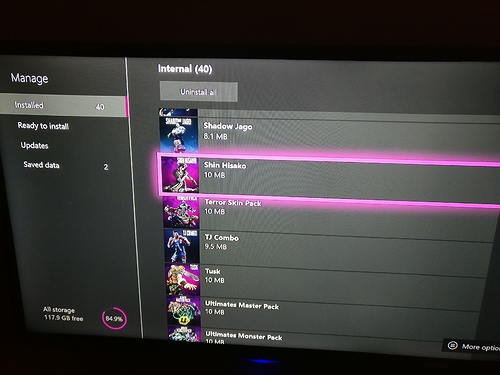 Honestly, it’s seeing these issues every day that makes me scared to boot up KI and play. It’s one of the reasons I haven’t played in a couple months. The other reason being my huge backlog.

Thanks for the comment I haven’t played KI in a while and thought of jumping back in as I miss playing it but it seems I can’t even select my favorite character lol. All those time getting her to level 50 wasted

Hopefully, you’ll be able to select her tomorrow:

Update on these issues: Thanks to all the information from this thread (and others working with me directly) we have tracked down most of these issues and figured out the common denominator. Why this has been a beast is because KI never changed, this started, and it’s intermittent & different for so many of us (I say us because people on the KI team are players too and have versions of these bugs as well- me included). End of day the why does not matter, this has taken a long time and it is …

Thanks a lot and yeah hopefully it’ll be fixed.