I had a cool idea to give players some extra incentive to plunk down more time into Shadow Lab: Shadow Skins!

How many of you have a few thousand Shadow Points lying around? Well, how cool would it be to cash in 1,500-ish for a special “Shadow” skin that transforms your fighter’s appearance to look like Omen bonded with them instead of Jago?!

The Retro skins and some of the accessories give off a “What if?” alternate universe sort of feel, but just imagine how cool your favorite fighters would look if Omen considered them to be the best vessel to corrupt and manipulate to help welcome Gargos into our reality? Shadow Jago kept Jago’s iconic appearance, but in a twisted opposite-world way, that focused on darkness, shadows, and general jerkiness, with his skull-face mask, dead tiger kneepads, butcher-sword, etc. If fans loved Shadow Jago’s appearance enough to throw tens of thousands to make him a “real boy,” I have a feeling that many of us would like to see Shadow versions of the rest of the cast too!

The average player will play a ton of Shadow Lab to not only collect as many Points as it took to unlock their favorite character’s Shadow Skin, but truly dedicated fans will try to collect ‘em all! Not only would this give players more reason to knock heads in the Shadow Lab, but it would help the community to create even greater Shadow Fighters to test your skills against in the future! As the cherry on top, why not ask Kevin Bayliss (very nicely!) to design the new Shadow Skins?
Obviously Jago, Omen, and Shadow Jago wouldn’t get any sort of bonus Shadow Skin from this concept, but I’m sure that we could find some nice prize for Jago/Omen/Shadow Jago players! 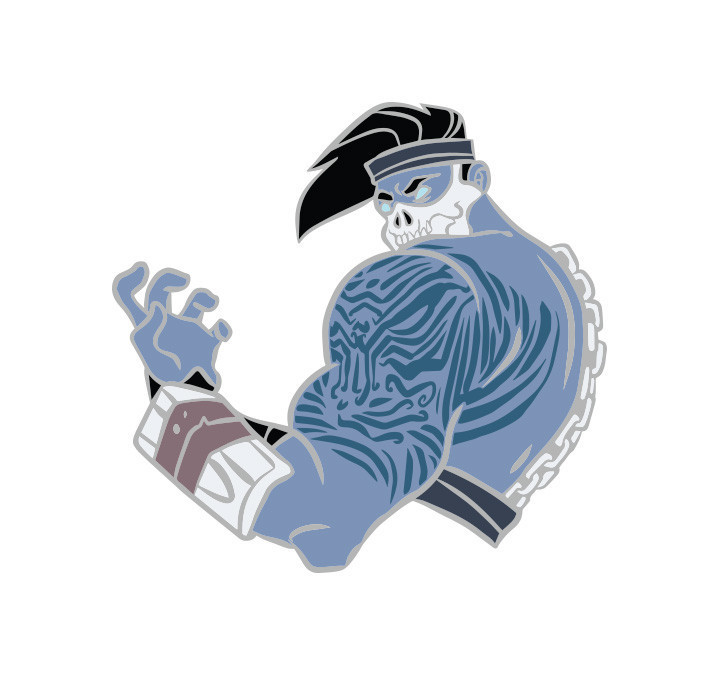 Once more, think of how creepy and nasty Shadow Jago is compared to Jago due to Omen’s vile corruption, and imagine if Omen bonded with someone else to create:

Let me know what you think about my idea, and to Microsoft Game Studios, Iron Galaxy, Rare, and all of the amazing fans here at Ultra-Combo, Happy 2nd Anniversary Killer Instinct!

Look at your likes to see what I think.

thats a really neat idea and bring more playability and replay value to the game. I love the idea of unlocks that cant also be bought through ki gold (though i still want new items to come up in season 3 that can be bought with ki gold but thats another topic).

Shadow skins sound great however… with shadow jago becoming a character… jago would need a new shadow skin… and how would shadow jago get more shadowy?

Wow! It’s great to see such a positive response to my idea! Thanks, everyone!

GalacticGeek – Thanks for that, pal! Actually, I can imagine ‘ol Aganos with a rough, craggy, & warped angry stone face, with sharp stalagmite teeth protruding from his dusty maw, as well as made mostly of dark obsidian (black volcanic glass) with diamond features. How about turning his rocky slab-arm into a heavier diamond bone-cruncher? But hey- that’s just off the top of my head!

ArtemisViiHawke – You know, I never even considered a vocal change alongside the new Shadow Skins, but if the KI Crew decided to go full-force with the idea, I’d be more than happy with pitching down existing dialogue to sound raspier and darker, as they did in the transition from Jago to Shadow Jago. “Your path ends here” to **“YOUR **PATH ENDS HERE!!!” **

I’d be cool either way though, and I’d love to trade in some of my Shadow Points for Shadow Lab exclusive goodies too!

EbullientSeaCow – After reading your concerns over Jago, I had an idea: What if Jago’s Shadow Lab reward was a set of special “Shadow Armor” accessories derived from a completely defeated Omen? The set would include Omen’s mask, and perhaps some arm and leg bands too. Since Omen is an interdimensional creature based on crazy magic and the like, it would be a neat touch if Omen’s face mask was warped into a permanent scowl of defeat, instead of his smug smile, because Jago took the mask as a trophy after finally taking his revenge.

After thinking about it, I’d bet that Shadow Spinal would be one of the spookier skins: Sharp canine fangs, bulky chains instead of ropes, a circular saw instead of a ship’s wheel…

Again, it’s cool to see that others here like the concept, and I’d love to hear more ideas, and tweaks to my idea! Oh, and don’t forget to check back on Ultra-Combo.com tomorrow, as it’s the 2nd anniversary of Killer Instinct, and I think they’ve got something special in mind for it! Cheers!

This would be a great edition! what do you think the shadow skins would be like? maybe like a dark omen like skin? Or more of a evil Ryu-esque looking version?

Glad to see that you’re onboard too- I’d say that my concept would transform KI’s cast from Jago -> Shadow Jago, as Ryu -> Evil Ryu. Give everyone blue-purple skin, skulls, spikes, and a few cartons of cigarettes so they sound just as hoarse as Shadow Jago, and people wouldn’t want to leave the Shadow Lab!

Speaking of which, my Sabrewulf Shadow is at 61 fights, and I’m doing everything I can to get my favorite werewolf up to 100. I play plenty of Shadow Survival, randomly challenge Shadows that are fairly high on the leaderboards… Is there anything else I can do to get my Shadows in front of dedicated players?

that could work. and im all for more accessories

That’s a really cool idea, I’m all for shadow skins

I imagine the shadow color unlocks could be something like an aura color effect. Or have it change the color of your projectiles. Or maybe when you dash you leave a cool visual trail (think thunder’s crows but a lot smaller) Spending shadow points on unlocking new visual character effects would be awesome!

I’d love Shadow Skins. I just hope everyone doesn’t start demanding a shadow version of EVERY character… The Shadow character idea could go maybe one more then will be worn out.

Even if this could not be done, I would love to see some use for shadow points because they don’t really seem good for anything right now. I think some exclusive shadow accessories or skins would be a great way to give shadow points more value.