Now look I adore Sadira’s design but I remember when she was teased at the end of Thunders trailer and she had a mask what happen did it not work or was
Scrapped? 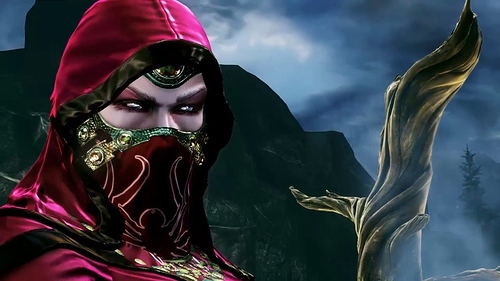 The other members of the cult have this look, as can be seen in her own trailer.

They are also in the stage and have those masks interesting.

I wish she had the mask as an accessory, but oh well.

Weren’t people whining back then that she looked too much like an MK character, that’s why they took the mask off? Same reason DH turned Spinal’s eyes from green to red because people complained they were red in the original?
DH listened to a lot of whiners back then.

Well, in these two cases it were for the better, imo.

Sadira’s current design looks much better. And Spinal keeping his red eyes is a nice consistency to his past appearances.

However, adding the mask as an accessory for Sadira would be nice.

I love that original design. Maybe a bit MK but still.
I honestly thought we would have had it as an accessory by now.

Because they wanted unmasked human characters. Jago has one. Was Sadira having another one too?. They decided the unmasked design.
She already looks MK but with the mask it was really cool

Yeah there were a lot of people saying she looked too much like Mileena back then. And to be fair, for the first KI game in years, it was probably better that they avoided looking too much like the competition.

Now 4 years later, It’d be cool if they gave her that accessory back somehow…you know…now that everyone knows she’s really a Spider-man knock-off instead of a Mileena knock-off.

It still baffles me on how Sadira was like Mileena when you actually compare the both of them, there’s hardly anything in their combat and personality traits that are similar, other than the mask Sadira almost worn.

Mechanically, there is nothing similar, but looks:

There’s enough there that if you didn’t know better one could be mistaken for the other.

Yeah, they got a lot of feedback that she looked super Mileena-esque. And to be fair, that’s the initial impression I had of the teaser as well…Mileena mixed with Spider-Man.

I think removing the mask was the right call honestly - as Wrath says, better for a series coming back from a 20 year hiatus to have its first new character have its own distinct visual identity than to hearken to another work that’s been around all that while. Plus, I just think the eye mask and fire eyes looks cooler all around.

I love her old voice in the trailer

It sounded more like an ancient Thai sensei or something

Eh? Sadira (particularly her default outfit) has some of the worst accessories in the game…only one of them doesn’t suck completely

I say no to this, don’t like this one. But yes to a lot of her concept arts! There are a lot of different designs in there, all good.