This has been around my mind for a long time now. Did the sketch while I was spending some relax time in another city and just scanned and finished it today. I didn’t want to color it but use grayscale at first but then just got carried away. I wanted to do it as fast as possible so this is it for now, a concept.

I’m a huge fan of the feral look old Sabrewulf had. The new design stands for a different Wulf from the old ones. Don’t get me wrong, I love the new one as well and some stuff they did are very cool. Gameplay wise I felt very comfortable with his style and that’s gold. He was more like his KI2 version though, his KI 1 is pretty much a Guile’s gameplay style.

About the looks: I like the bulkyness KI1 had but the head from KI2 is ferocious. I wanted to bring that back along with some features new Wulf has (kind of stylized).
This Wulf is just a little older. He could have a more developed tail (which I did not add here). The fur in his arms is longer and lighter, same in his feet His face braids are gone, showing his old KI2 style. His eyes glow in the dark.
The left arm is recovering from serious burns (maybe Riptor or Cinder) and he has some new scars. 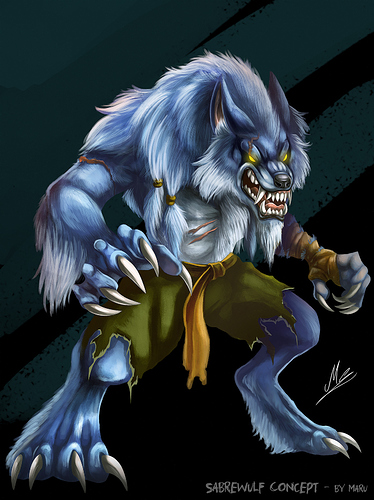 Amazing! I love it.

That’s a pretty amazing piece of artwork. And I think it is a terrific iteration of Sabrewulf’s design.