hey Web Nation, how goes it thus far in season 3? im loving the salticide attack alot, been trying to use that move for mix up oppurtunities. some guys fall for it so bad, other times ill eat a lp. DP or at the least ill make them whif that sucker after i change trajectory. i understand we have more KV to play with, so if you guys got awesome juggles to share that’d be great! im also wondering how jump canceling specials works too, i just cant build any theoretical stuff not exactly my forte

For whatever reason her juggles (jump canceled normals) off of grab in instinct are stupid good now.

In instinct Jump cancelling blade demon and putting a web down aides in keeping the pressure on, but haven’t found anything else

Sadiras fancy juggles with grounded normals outside of instinct are better as well and you have a greater variety and with less execution difficulty.

In instinct salticide can be converted into a whole combo with the use of a web. 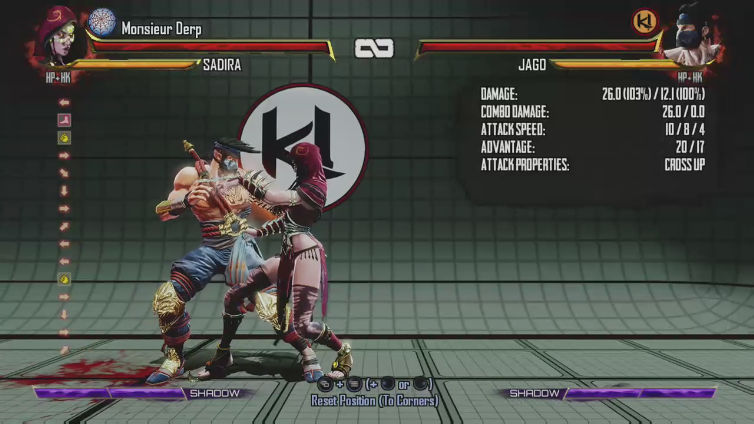 thanks for the feedback guys, i am in the process of getting reacquainted with her. things are going well, i won alot more matches than i lost with her last night. that climb to killer is difficult, only because you dont get points worth a crap no matter who you beat lol.

i been using salticide to get guys confused. ill bounce a few times on their head and switch her trajectory from left to right or vice versa, ill even go left and right on the same side of the opponent. theyre like wtf pushin buttons, then ill allow sadira to fall further down for a j.FP or a j.FK depending.

it does make the MWB safe, that i do like. ive caught a few guys tryin to catch me in the air and they get pogo’d. ill also use salticide to bounce, toss out a MWB that allows me to go in for a cross up.

jump cancels…i am gonna start working on those. in instinct i been using web traps as meaty frame traps. if a guy is gonna push a button he gets stuck so i go in and do short combos then on knockdown ill put one over his body and start confusing them as to which side im gonna be on. nothin flashy, but thats because im still rusty. need to learn some instinct tech!

Here’s a vid of me doing some of the some pretty easy Tech using Salticide. I’ve been using the juggle part for a while now, but I see that I can actually work it into a ground based combo using the Target Combo (always forget about that one). Does pretty awesome damage too (Between 44 to 45%). Not bad really.

Is it me or does Salticidae have a rather large hit box on Arbiter? Especially on block.

nice vid @WebNRaGnArOk! thats pretty fancy and doesnt look hard at all. i played at most for an hour yesterday, didnt get to bust out sadie though just went straight for hisako and rampaged up another level in gold. ya know, that bracket is full of tough competition. the rat race continues back to killer!

Been messing around with Salticidae recently and found some interesting ways on applying said move into combos.
WebNRagnarok April 10, 2016, 1:19am #9

That is brilliant! It looks amazing though a bit situational. Keep it up! It’s definitely worth trying out.