Have no idea what this game was but I saw some funny footage. Coming to all major platforms on September 5. 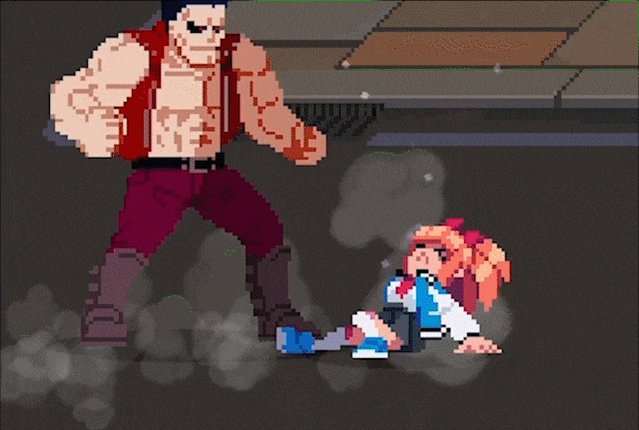 im planning on getting this for the switch, i could alway use another brawler

It has some hilarious moves. Just all around fun it seems.

It looks cute. And between Arc Systemworks and Way Forward, they have done right in the past. So I will probably pick it up. I hope that they have some mechanisms in place to encourage more playability. No one seems to have picked up on the formula that Dragon’s Crown made so obvious…

Had my eye on this for a while. That pixel art and animation is seriously impressive.

looks like this game is out today, ill check the eshop for pricing. looks fun, and i always enjoy Wayforward’s games. they put out quality titles, awesome soundtracks, fun games. shantae 5 on the way, hope that one rocks!

I was saving my 30 bucks for a Switch SamSho pre-order so I could get the NeoGeo Pocket handheld version of SamSho 2 for free but I could not resist buying RiveCity Girls. Just bought the game and it is now downloading…

let me know how it is!

I like it but I’m so not used to the Switch. My hands hurt from holding it lol

So far there is much stuff to do and unlock, and the presentation is really well done.

I’m disappointed there’s no online play for this. But what’s holding me back is the replay ability. Can you give me an idea of what they have in here to keep you playing the game?

I have not progressed very far but I just started collecting moves for one character and generally I enjoy listening to the soundtrack. The assist system is interesting to me as well when you can add foes to support you.

Not sure what kind of other secrets or unlockables are in the game and if it’s going to be enough for replayability, maybe something like a new game +. But so far trying out new moves and enjoying the story and music is keeping me interested during a 30 minute train ride to work.

EDIT
…and coop with my kid. Something I haven’t tried it yet but planning to do some time this week. Assuming this will add to replayability…

definitely going to pick this up when i get paid

i just fired up the soundtrack to this game, its really good. they put in some actual songs with gorgeous vocals from what i have heard thus far