Razer Atrox for XBOX ONE vs HORI RAP V Kai

Basically what the title says, Im looking forward to buy my first fightstick and I would like to know which one is a better option, I know both are good fightsticks but since the Razer comes with Sanwa parts (which are supposedly the best) I would like to know if the extra 50 buck will be worth it, but, since Razer Atrox doesnt work for PC (at least not completely) I just want to know if the HORI and Hayabusa parts are nearly as good as Sanwa then

I put a Hori Hayabusa with Octogate in my TE2 and I friggen love it way better than the Sanwa and Seimitsu sticks I used in the past. It feels buttery smooth and I would highly recommend it

If its for pc get a ps4 stick use ds4windows

If its for console atrox all day buy a 2lb spring in the future.

I bought the rap V and I use it to play KI on Xbox and Skullgirls on PC and it’s works great!

The Razer Atrox is very good but usually isn’t compatible with losers or winners finals and semi finals, afaik.

Atrox will be fully compatible next month.

I have a Rap V for X1, a DIY Fightstick with seimitsu buttons and sanwa JLF joystick and a DIY Hitbox with sanwa buttons.

From my experience I’d say that the Hayabusa joystic is FANTASTIC, veri precise, very smooth.

Kuro buttons feel cheap as far as material goes, really cluncky sound and they wiggle a little, but they are actually the most responsive of the bunch. That responsiveness is generally great but sometimes the go off by just slightly caressing them causing some undesired inputs.

Both sanwa and seimtsu button have great build quality. Sanwas have a bouncier feel compared to the more clicky feel of the seimitus, but sanwas sound the best.

Keep in mind, the overall build quality of the RAP V is very poor.

My ideal fightstick would be a xbox one pad hack (it works on x1 and PC no problem and you can connect the headphones to it) with a B15 SDM X1 Case equipped with Hori Hayabusa joystick and sanwa buttons. This is the case I’m talking about: 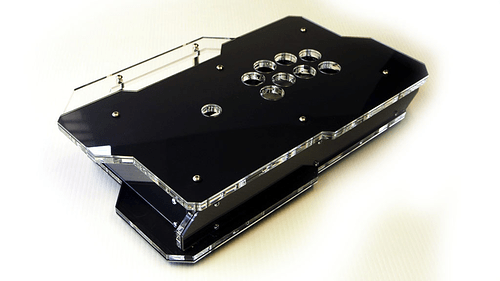 The Razer Atrox is very good but usually isn’t compatible with losers or winners finals and semi finals, afaik.

I own them all. A fighstick aficionado here. I have more sticks that I use on PC and other mods. Will post more info in another post. Watch this bad ■■■ Youtube video that I somehow found on the interwebs!

That plexi case is really cool. I can’t understand why it’s so expensive though.

From what all is available for the XBox One, the Atrox, TE2, and the two Horis, HRAP IV/V. I use my Atrox the most.

TE2: Had to get these when they came out. They’re Mad Catz! I like the design. Easy to get into and swap buttons, and the ability to swap out art without having to remove the pushbuttons and everything else (well, the ball top) The bottom has a foam padding for non slip when playing on your lap. Doesn’t do that great of a job when placed on a hard surface though. The top panel feels very flimsy in that it feels it could cave in with enough pressure put on top. Later models/shells have improved on its original design.

Atrox: Solid design. Nothing that special about it. You can get into the stick for maintenance or swapping out parts. It also comes with its own tool, just like the TE2. It’s very sturdy and the bottom surface makes it great to play on hard surfaces, as well as on your lap. They both use Sanwa parts, but you may swap them out for whatever fits your personal preference.

HRAP: Top panel layout is pretty wide. It has that Menu/Windows button (which I don’t like), but you’re able to lock it so it doesn’t interfere with play. The kuro buttons on them are great! The response from them makes it easier for execution. The earlier models do no support a complete bottom non-skid pad, but does have 4 rubber feet. It’s light. TOO light if you as me, but not as light at those Injustice fighsticks by PDP. Those suckers were so light, my 2 year old could throw those across the room! You cannot access the buttons/joystic so easily as the other sticks that were mentioned. 6 screws hold the bottom plate on. What I’ve done with mine is purchased a roll of non-skid pad, cut it into shape of the bottom plate, made holes available for the screws, and used adhesive spray to stick it. With the weight issue, nothing a few rolls of pennies can’t fix. I recommend using hot glue to hold them down in place. This will allow for future projects in case you want to remove them or something.

Recently, I’ve purchased mechanical (MX) pushbuttons from Paradisearcadeshop, that was in attendance at Combo Breaker. They feel great! The response if much better than that of your standard Sanwa/Seimitsu. Think of a mechanical keyboard. There are 4 types of mech buttons, each with a different set of responses/force 45gram, 50, 55, and I thin 65. Not sure on the last one. You can find this at over at paradisearcadeshop.com or other stores.