Also i noticed that the achievements are not recorded in the Xbox app.

Is this bugged for all Windows users or is it something on my end? The only thing it saves is how many ‘time played’. 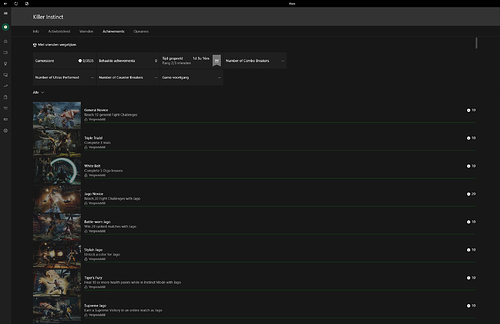 I’m being plagued by the same bug but no one seems to be responding. @rukizzel said on Twitter that it has to do with a privacy setting last weekend but I haven’t heard back from him so I’m having to ask on the Microsoft Answers forum to see if they can give me an answer.

Dude, I don’t even have that page for the game in the Xbox app, it just displays a blank page + recording with it is not supported by the game (or the app) at all + if I go to my profile page the app does not even say that I own the ■■■■■■■ game. What a horrible piece of software, why the ■■■■ do we need an “Xbox app” on PC anyway?

I thought I was the only one that was missing a KI page on the Xbox app.

U should have that page in the Xbox app. Its under the achievements tab in the left colum and there should be a list what games you own then just click Killer Instinct and it should open another page with the individual achievements.

Edit: Seems u must have “Connected User Experience and Telemetry” enabled under Windows services to keep your rank and enable achievements. But the achievements i already unlocked doesnt show correctly…

Its sad this great game is in full hands of microsoft rather then Double Helix Games/Iron Galaxy Studios.

I know the game has been released exclusive for Xbone in 2013 and i was stoked that it was coming to PC but with all these issues around Windows 10, - store, xbox app,etc… just sad.

Dont care much about achievements but to have that telemetry service enabled to be able to rank is kinda BS.
I really hope that the devs do something about this so that ranking is no longer combined with the xbox app…