And that’s where the problems started. He wasn’t seeing the party or game invites I was sending him. Even worse, we never quite figured it out. So, to make it easier for the next PC player that wants training in the way of the game, I have a couple of questions for us non-PC players so that we can help them out with that:

I’m a PC user and I would greatly appreciate information on this subject as well. I find it bad enough that I need to go to an external website to see messages that people have sent me, let alone having no in-game overlay to see invites or anything like that. Unless I’m missing something with the messages.

Actually, afriend and me tried to invite each other on a lobby/exhibition.

Each of us see our invitation IG for X1 and via xbox app on PC.
But we cannot join each other on the lobby.
Edit: we got an error message like: “you cannot join the multiplayer, pelase try again later”

Just log in on the Xbox app on PC. Mine starts automatically when I start the PC ao that even when I’m not on my Xbox atm but on my PC i get all the invites there. I have the laptop near me all the time so when I get a message it pops up on both and I always open it on the PC because if I need to answer it will be way quicker with keyboard.

Shouldn’t be difficult to figure out that to get xbl messages and invites you need to run the app. Comon sense. Just like you need to run steam to do the same with your steam friends.

But where do the invites appear in the app? What if he’s not in the app, but is in the game instead? Or somewhere else? Will he still be able to see it, say, in the notifications tray?

It appears on the bottom right of the screen like other notifications. You don’t even need to have the app open. Notification will appear, click there, app opens.

I don’t know if you guys use notifications for this forum (not on the page itself but on windows itself) but if yes it appears in the same spot.

I don’t know if it appears while gaming. I think other apps don’t but the Xbox app should

I asked the guy that I was trying to help if he saw any notifications there though, and he said he saw nothing.

Is he logged in? I can take a screenshot of

Edit: He should check the settings. It probably is importing all my settings from the Xbox but notifications could be off by default I don’t know.

Right now? No. I know he has the Xbox app, though as he was using it, and he obviously has Win10, since he was playing KI.

We actually managed to get the whole party and game invite thing to work, but only 1 way. He had to invite me to both, so he does know how to do that (I’m personally still fuzzy on how he did it though, as I don’t normally game on PC myself), but I couldn’t invite him into my own party or game, which means I can join him, but he can’t join me.

Furthermore, whenever we tried to connect into the game, we’d get an error message saying that it could not connect. He checked his router settings and is getting a new 1 today, because apparently it’s really, really old (he did say that he was getting 30mbps down and 10mbps up with something like 4ms though - and with a wired connection, I might add). So, I won’t hear from him again until he gets his new 1 set up and running.

What kind of message? A PM? Stop not being specific!

to get a notification

I told you @rukizzel, this doesnt work without a space, i dont care if microsoft says its my gamertag regardless of space or not, nobody wil ever find me if they search for my forum name.

There, bottom right, it wasnt showing up until i open the app though, it works with the app closed at least sometimes, ive seen a lot of notifications before and i never have it open. (maybe it was just delayed and its a coincidence that it showed up right as i opened the app). 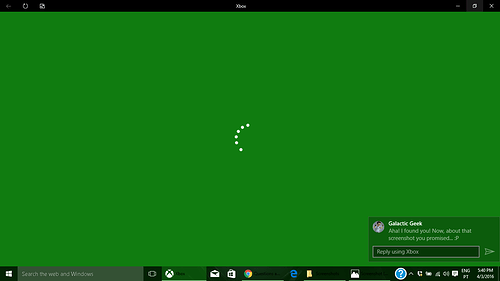 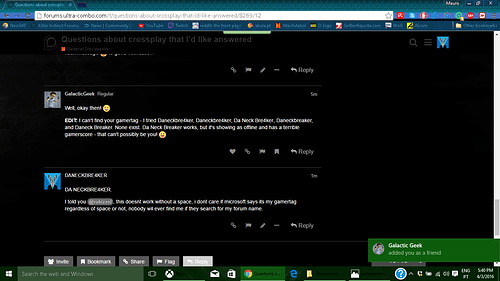 also where the forum notifications appear. 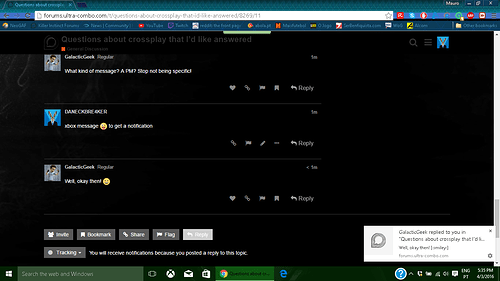 Hmm, and I thought you were going to send me the screenshot via XBL. Silly me!

For the record, the notifications I get for XBL on my PC that I’ve seen on my Win10 PC look NOTHING like the ones you’ve posted in the screenshots. When it pops up for me, it’s usually on the top right of the screen (which is where I keep my taskbar, BTW), and is very simple - “so and so sent you a message” for example. It’s never actually shown the contentts of the message like in your screenshot. Also, this only (technically) proves how to see messages, not party or game invites.

probably depends on where your taskbar is then. Sure it does, when you get a party invite on the same exact spot where the other notifications appear it will appear something like GalacticGeek invited you to a party with tho clickable boxes saying accept/reject (or other words that mean the same, dont know the exact words)

on the app itself this is where the invites will appear, on the top right, right under the x the tile that is selected (the one with the green bar beneath), if you have some sort of invite or other notification the icon will have a number next to it telling you how many notifications you have. 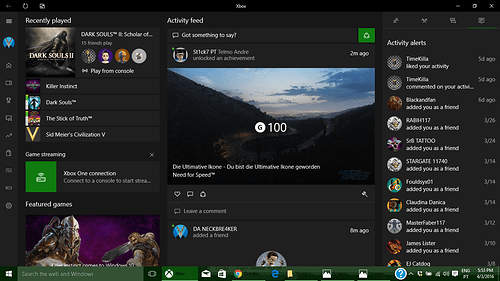 Maybe so, but again, the guy I was working with didn’t see them. Is it possible to turn notifications off, like on the XB1 or something? If so, he might have it setup like that.

I suppose I’ll wait until he reappears online and direct him to this thread to get a better idea of what’s going on here (assuming, of course, his new router doesn’t already fix the issue itself).