For days, I’ve been messing around with my controller. Opened it up, thinking something broke. Nothing. I have to press quarter circle back super hard to get out a special. Went to play MKX, and it works just fine. WTF is going on. This sucks cause I really want to play Ki, but I basically can’t do any openers, unless I switch side, but even then that mean my quarter circle forward isn’t going to work. I’m sure no one else is having this problem. Doesn’t make any since.

You may need to get another controller. IDK. Sounds like a hardware issue, not a software one.

On the other hand, you could use Combo Assist…

KI uses Down, Down-Back, Back for quarter circle motions.

MKX does not use traditional Quarter Circle back motions. MKX is simply Down, Back

Ur controller may not be registering the Down-back (diagonal) properly

I want to use my ps4 controller on X1. But I can’t get the cronus thing to work properly.

I can press down back from the right side, and it comes out fine, though. When I’m on the left, forget about it.

Another vote for controller. Mine was being weird brought another one everything is good now.

You probably aren’t used to doing real quarter circle motions. Like the guy above said, you need to also hit diagonal which is a lot more harder to register than just hitting down and right.

If you want to test it to be sure, plug your Xbox One controller into a Windows PC and then go to USB controllers in Control Panel (or type it in the Windows start menu). Pick the Xbox controller and they’ll give you a little widget that shows you what buttons you are pressing and the position of the left analog stick. Rotate the stick around very slowly in the corners and make sure it’s working like you expect.

I had a controller die on me because it stopped registering the down-right diagonal entirely, so it’s probably a common problem.

lol. You guys making me out to be scrubby as f***! It’s the controller though. Doesn’t work for Skull Girls either, so something is wrong. Thanks though.

KI will burn through some controllers

My dpad eventually stopped registering the diagonals, which were critical for crouchblocking so I started using the analog, and it’s pretty nice actually! So you might wanna experiment w/that til u get another controller.

Try putting the inputs on the screen on the training mode. IT will show if the diagonal motions are actually being inputted.

Yeah, last time I saw that as an issue it was a controller problem - turning on input display will let you see if the thing is properly registering diagonals.

You can test it out in the Practice mode and turn on the option where it shows you your inputs and see whats registering. Most likely the controller as I haven’t seen any one online miss the quarter motion inputs.

Random whole right on the diagonal, Not sure if this is normal. 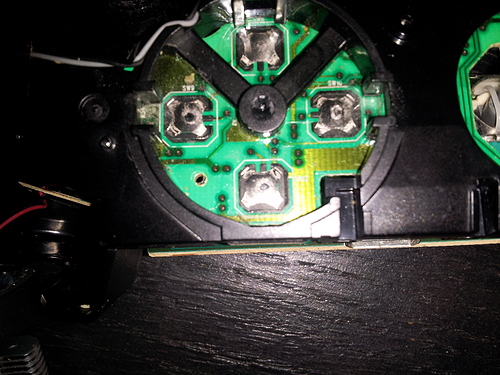 Doesn’t look normal. You can try to look up youtube videos about this issue and possible fixes. I have fixed the drifting joystick issue via youtube videos so give that a shot. If not it’s time for a new controller. On a side note I bought the new Copper Shadow Xbox One controller yesterday and it’s pretty sweet. Plant to get the Blue one today

True. Went through two in season one alone before I just said fugg it and bought a Fightstick

You have to input D, DF, F + P. Don’t miss that corner or you are screwed.

Playing on a hitbox or regular arcade stick and occasionally, you drop moves because of this. Go to training mode and turn on input display and you will know why.

Frustrating. I REALLY wish they would change this.

Put about 8 layers of electrical tape over the down button on the circuit board. The problem is the button wears out so increased travel is required to register the down click, which becomes a problem with the d pad diaganol not “clicking” the down button. I’ve fixed three controllers this way.