STORYWISE, How do all the characters stack up against each other, power scale wise?

Who’s the strongest? The most powerful?

Who’s the weakest? The least likely to come out alive in a fight?

Who’s the king of swing? The mid-cards in the School-yards? The head honchos wearing the ponchos? The Low-Ballers that Got-No-Dollars? the Mac-Daddies of Boom-Ba-Laddies? (After reading what I just typed I’m 90% sure I may be a very annoying person…)

If there’s already a forum post about this subject, my apologies! You can banish me to the stasis tubes of ARIA’s Love-Nasium!

Either way show me how you think the KI characters stack up in a tier list /:power ranking against each other based on Lore from the story modes, Novellas, and cutscenes!

A couple things to follow though (my apologies for the rules)…

Anyway here’s my power ranking list. From most powerful to least powerful:

On a separate note I truly hope that the final Season 3 character is Ryat Adam’s Hopes and Dreams XD. All of his moves can be based around crying in the corner. Once he gets his instinct meter he curls into the fetal position and cries some more… Now that’s a Fighting Game character archetype that no one’s used before!

Anyway show me what you guys think would be a more accurate Power ranking for the characters of KI! And again if there is already a post about this, I apologize.

Shouldn’t kim be above Gargos? She’s destined to defeat him so one would assume her power is greater than his? Unless it’s some bs like “oh, the Dragon spirit causes Gargos to weaken when it’s near him” or something.

Yeah see I’m not sure. You could be right. Would you put her above Jago then?

Gargos be like “Yo! Yer dragons be backing me up little Chica! Back on up!” And Kim is like “Nuh Uh old gargoyle bro!!”

Seriously though I half expect the dragon spirit to be a lie kinda like the Tiger spirit and Jago… Can anyone say Eyedol? Hehe

It happens in Mortal kombat as well e.g. Johnny defeating Scorpion and Subzero but later on scorpion beats him solo the same said for Sonya blade…or something like Jax beating Liu kang, Cassie beat corrupted shinnok but her and her team lose to Subzero

Its not a bad thing it just makes things less clear for me…Street fighter is the only one with consistent power levels even up to SFV.

Gargos I would agree with since he is pretty much the M. Bison of KI

Overall I pretty much agree

Why is Fulgore so low D: I understand the mass produced ones but shouldn’t the Eagle/Main one be seperate?

Yeah. I was thinking of the mass produced ones specifically. Probably should change that. Although I’m not sure where Fulgore would go.

Yeah I do find it interesting how the characters can go back and forth and win one day, and then lose another time to the same opponent. Although that simply could be an example of the characters training more / illegal use of moose blood (ALWAYS DRINK YOUR MOOSE BLOOD KIDS!)

I honestly think it is impossible right now to rank the characters. There are so many factors that are just unknown quantities that any list will have faults.

IMO the only quantifiable spots right now are probably 1-5… 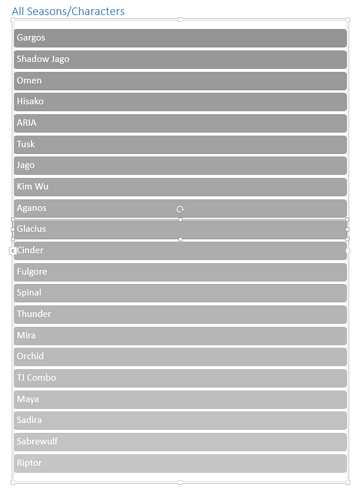 Gargos is obviously at the top, with Shago (season 1 version) and Omen behind him.

Hisako is up there as she is the only character canonically to have defeated ARIA so far, and ARIA is just a boss…and is canonically the one entity that currently has the potential to stop Gargos alone.

Other than that it is up for discussion who goes where. Tusk, Kim and Jago are up there, but so is Fulgore, Spinal, and Cinder…not to mention Aganos, Glacius, and [insert character here]. I think objectively the “weakest” characters are Sabrewulf, Riptor, and Sadira, but honestly I think they just haven’t had a time to shine on there own yet.

Sadira is essentially a henchman of UT, but she has plans of her own. She is the head of an organization of her own. She climbed to the top of the Red Eyes on her own, but since she has been allied with UT/ARIA she has been met with defeat and failure. Thing is though, she was set up a few of those times by ARIA herself, and often times her missions during those fights weren’t to “defeat” her enemies, but to fulfill some other purpose. Case in point, her fight against Glacius.

Technically Glacius won that fight, but Sadira achieved her goal, and ultimately Glacius and his DNA were captured…so did she actually “win”? Sadira could be perceived as weak according to the details of her accomplishments in the story, thus I put her low on the list, but I think there is a good argument for her being in the middle of the pack with everyone else.

All in all, most of the characters overlap in terms of skill and power, thus most of the characters would/could go back and forth in battle. Some people would call it “plot armor,” but in my honest opinion that is how it should be. TJ can beat Fulgore, but like wise Fulgore can beat Orchid. Riptor DID beat Jago, but yeah, Jago, according to the story, was at his weakest since he was recuperating from his separation with Omen. it just is what it is, and allows all the characters to be strong and around the same level…for the most part.

As much as I would love to do this there isn’t a ton of info to go on to place these guys IMO . There are a few we can assume like Gargos being #1. The story implies Tusk is pretty up there too. Obviously Kim Wu cause story and even Jago (Dragon Spirit seems to think he’s a big deal).

ARIA I assumed would be close to top tier but Tusk apparently can rek her bodies pretty easily so idk. We could argue she wasn’t going all out or something, but that would be speculation on my part and holds no weight.

I love all the info people are giving here! And I agree. Looking back it is hard to identify an accurate list and there is a lot of overlap.

Yeah ARIA is a toughy. She’s almost like Doom with prep or Batman with time. A super rich techno wizard that uses technology and insight to win fights in the long run.

I think it’s strange that y’all seem to list Riptor beneath a whole bunch of martial artists. She’s a cybernetic, fire-breathing velociraptor. Forget about who beat who in an arcade ladder, and seriously mull over the fire-breathing, cybernetic dinosaur aspect. Her appearance in ladders is a strictly meta means of making such a creature a playable character. By my reckoning, the only logical combat scenario involving Riptor and any of the simple humans (werewolf included) is them barely acknowledging her with a “holy crap, is th…” before their graphic death by murdersaur. We are talking about a velociraptor, after all.

Yeah I think I may have underestimated old Mizz Rippy…

… keep in mind even “simple humans” in this game have augmented powers and seem to be used to fighting “weird” creatures.

All in all though I’m getting a common opinion from everyone here that unlike a lot of fighting game lore out there, Killer Instinct’s characters seem to be able to win and lose to anyone. Kinda like real life oddly enough

I compare the characters to apples and oranges. I think we can all agree that it’s common knowledge that in a knife fight involving magical cleavers, an apple will ALWAYS beat an orange. But if an orange is given a cursed monkey’s foot, then it might be able to turn the tables on the apple… …

I think you are misunderstanding a little bit.

Riptor is no doubt strong, dangerous, and versatile, but in the lore she hasn’t done much…alone that is. She was said to be the best of the Stalkers, thus she was was named their leader, and also she defeated/proved herself worthy when she fought Sadira in the S2 Rivals mode, but when she fought the the heroes she was always leading her pack. The only other character she fought 1v1 was the OG Riptor, and really (at least imo) that shouldn’t count in this discussion.

But anyway, don’t take her listing as concrete, or even at face value. I believe she can beat any other character on any given day, given the right circumstances, she just hasn’t been given the right story/opportunity/motivation. Riptor isn’t crazed like sabrewulf as she is a smart and calculating predator, but she also isn’t focused and growing/developing like a Jago is. Riptor’s story just needs more time to cook imo, and I believe we will get more to go off with her as things go on.

FYI: as a comparison, Riptor is like Baraka from MK in many ways. Baraka is a strong fighter in that universe, but in most of the stories he simply plays the role of a henchman. Baraka did get more prominent role as the story progressed though, and if the novella keeps going I’m sure Riptor will get her chance to.