I thought it was in the definitive edition.

I am playing the free version and is unlocked, also I get Orchid by playing shadow lords

Last I checked, Christmas Orchid was supposed to be free.

Strange, I have the definitive edition but I don’t have it unlocked.
Seems like I have to play the shadow lords mode more.

Sorry to bump an old thread, but I was wondering if there’s any way to get access to those Christmas colors if I don’t, even though I installed the Definitive Edition. Should I install another version of the game on top of it?

I’m with you I’ve tried everything to get the Christmas colors. I have the little pieces but I don’t have the full set

What little pieces? I have no pieces

From what I understand, the Christmas skins are completely unavailable now.

I had SW antlers and orchids Christmas canes. Originally I had game pass and I ended up purchasing the game and I ended up showing some updates available when I went to the Xbox store because a lot of my packs according to the game store we’re not installed even though they were supposed to be included.

So on top of definitive edition I installed a number of all of the packs individually and it updated a lot of my accessory options. Some of my riptor accessories looked different after I did the individual pack upgrades. Also I think idol had more accessory options as did glacias gargos and maybe cinder? I’ll attach a screenshot 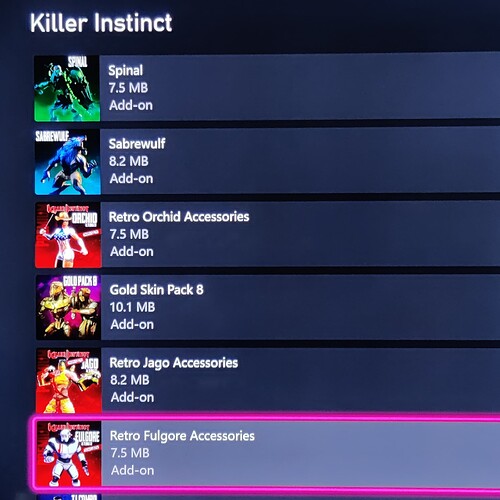 A lot of that is supposed to be included in definitive edition but I noticed when I did it manually many of the accessories updated or looked different. I have some buggy issues with my killer instinct it does crash a lot if anyone has any advice on how to fix that let me know. I was told that if you uninstall the cargos costume pack and The Omen costume pack it could fix it

Me I don’t have the Retro Accessories items, or I don’t see them, but I can use them in the game.

I think like me, you bought the Definitive Edition, yes? If so, I believe things are bundled differently than for people who had the game earlier with it’s Seasonal model.

Those were GG’s last night. I was surprised I got the win over your hisako ( shin?) But I had no answer for your Fulgore.

Man there were some heavy hitters out last night yourself included

Thanks, you did fine.