No Fighters available on PC in offline-mode

@developers @TempusChaoti I just tried the new update and there is still no fix for this issue. Are there any plans to fix this in a future update?

Thread summary: Some people can’t play the game offline (without internet conection) on PC (characters are greyed out), while others have no problem at all. It probably depends on the store the game was bought (Xbox one, Xbox app or windows store).

As of yesterday’s update, it’s happening to me on XB1 also.

Try resetting your computer’s clock, and make sure it automatically adjusts for daylight savings time, then reinstall KI. I had the same issue, and this fixed it. If I recall it’s some sort of certificate authentication issue.

How do you reset the Computers clock? Thank you btw

Thru the Settings menu in the Control Panel.

But there is no “reset”-button 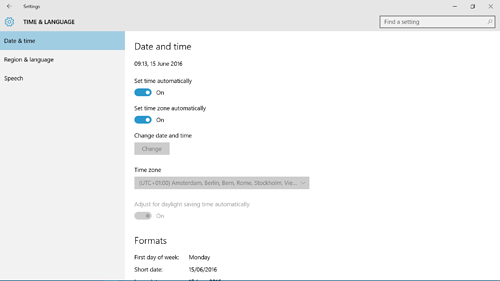 so what are the correct steps?

Thank you very much

This is gonna sound silly, but roll with me here.

Toggle the ‘set time zone automatically’ off, then on again, and save the changes (if it doesn’t autosave). Then reinstall KI.

Ok, thank you, i give it a try

it doesnt work for me. Ive toggled the “set time zone automatically” and then reinstalled the 26 GB. But although all fighters are theyre online, they are still all greyed out except Gex the Gecko, when playing it offline.

Well, but thank you anyway for the try. Maybe someday in another life, when the servers are long shut someone will find a hack for this. The purchased fighters are on the SSD, so there must be a way.

Still waiting…
(Fun fact: this week’s character should be General RAAM but I only have Riptor and Shago when I go offline…)

Hallo, i have Raptor since the beginning. It seems, it has nothing to do with the weeks character.

Can someone tell me how to unlock Raptor. . .

Any news concerning this issue? I still can’t play with shago offline…

In one word: No

This topic is suffering from fully negligence…

Recently hauled my PC over to a friend’s place so he could try KI. Due to unknown reasons I couldn’t connect to his internet so we were stuck with Riptor like many of you.

It’s pretty annoying that I only need an internet connection for the 30 seconds it takes to check entitlements when starting the game just so the game recognizes that I have the ■■■■ I bought.

Well, I’m sure since MS wants to compete with Steam/Origin, they are hard at work for providing us an actually working offline mode in one of the future updates

No seriously, the reason this is so annoying is the fact that the game has an offline mode… it just doesn’t work for some people.

This bug is there since the game was released on PC…

I dont think its a bug. I think its reality. Its an typical “always online”-game. The dream MS has dreamt from the beginning of this gen. I have givin up. Turned over to SFV. No lust for spendin time for an always-online-game, which is dead in 5 years.
No words from the developers like “we are aware of the problem and working hard on it to solve the problem”, simply nothing. Im bored of it and totally dissapointed.

I dont think its a bug. I think its reality. Its an typical “always online”-game.

It works for some people, so it has to be a bug…all we can do is post this into the bug Thread and hope we get IG’s attention.

I can assure you guys its not an online only game. I have the whole roster available offline. It would seem to be that there is some mix up with how the save data is transferred. It usually involves Xbox owners converting to the PC version and the transfer of their files and ownership over is getting screwed up. That and some PC only owners may be purchasing the xbox version through the xbox store instead of the windows 10 store and that may also be causing problems. It definitely seems like a certificate error and not an intentional one with the game.

This makes sense… Shago is the only character I bought with the Xbox app and not in the Windows Store and he is the only one I can’t play offline.