New Video By Max About "#BringBackKI" 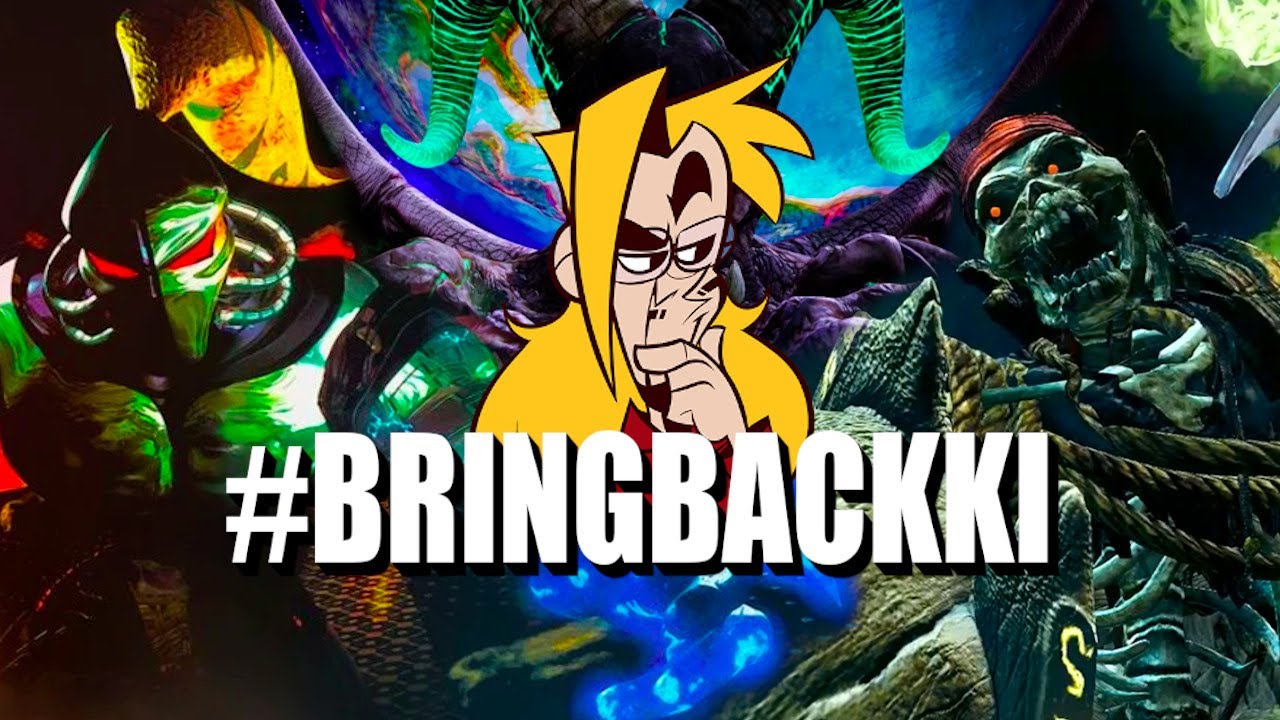 I watched this last night, and I grew pretty sad. It feels like KI is fading out of the scope at Microsoft, and could possibly never come back. The music Max used made me feel like hope has gone downward for the game getting a follow up on Series X. We just don’t have any positive answers from MS.

You and me both, brother. It’s really distressing and discouraging to me as a fan that a really cool and underrated series oozing with so much potential like KI would be treated this way. Like, what the hell?

If this is true, I see a bright future for KI, and we should keep up the good fight. (#BringBackKI) If the Xbox crew is listening, I NEEDED to have the Xbox One on Day One for KI, and I’d go out of my way for a Series X if I knew that more KI was confirmed to be on the way…

Stay positive and wish on a shooting star- they all can’t be damaged Glacius spaceships!

Who would be a good developer for KI? Personally, I think NetherRealm Studios would seem the obvious choice given their pedigrees with “Injustice” and the MK series, plus, Ed Boon and Ken Lobb have both expressed an interest in doing an MK/KI crossover. They also set the bar for some really compelling story modes, and I think KI having a more developed story would definitely increase its popularity. It has all the right parts for a compelling story in its own right, after all.

Another possibility - if Rare isn’t interested in doing it (which would be pretty messed up imo), then Playtonic Games might be worth considering, especially since it is made up of a lot of former Rare staff who had worked on KI.

I personally think MS isn’t done with KI yet. I mean they did 3 seasons with some extras after that so financially the game must have at least recouped it’s costs.

Struggling to find a dev makes sense to me as they’d want to make sure that dev wasn’t bought out by another company and could commit fully to the project. Hell they may even want to assemble their own dev team (which is what I’ve been saying from the start) directly within MS.

It doesn’t surprise me that Rare isn’t interested in doing it, when was the last time that current team worked on a fighting game?

Personally I think MS should create a team directly within MS, have it developed internally.

Bring back the original characters from KI 1 and 2, keep some of the new ones and have a few fresh faces.

Each character should have an Ultimate or don’t bother putting them in at all. Make the word ULTIMATE mean something. Keep them cinematic and impactful, if the ultimate is to imply a character death they need to imply it a little better than before. Make them an extension of the character and their personality.

I’d like to see them bring back No Mercy finishers too, not gory like MK but cinematic and stylised. Go for style over gore and shock factor. Again make them an extension of the character. A teen rating can go a long way in terms of what you can show on the screen.

E.g. Jago prays and begins to walk away from his startled opponent. He looks behind him slightly and a car falls near to the opponent but doesn’t hit them. As the bewildered opponent looks around several cars of different makes and models fall down on top of the opponent. Their hand visible struggling before becoming still.

No blood. No gore. Touch of humour. Yes thank you I’ll take all of that.

Unlock system was grindy but at least all players of all skill levels could unlock all content. Nothing worse than spending money on a game that locks content behind skill walls. You offset this by having different ways to unlock the same content. Complete arcade on the hardest difficulty nabs you a costume, but for the less skilled players that same content unlocks after say 4 hours of playtime or after they’ve played 30 matches etc.

Max said something about the game should be like MS smash bros. I kinda like this notion, could be a way to bring in some really cool characters from MS back catalogue.

Bring back the original characters from KI 1 and 2, keep some of the new ones and have a few fresh faces.

Each character should have an Ultimate or don’t bother putting them in at all. Make the word ULTIMATE mean something. Keep them cinematic and impactful, if the ultimate is to imply a character death they need to imply it a little better than before. Make them an extension of the character and their personality.

Hell yes to this. One of the things that bugged the hell out of me with the current Ultimates is that they seemed too much like SF4’s Super moves and didn’t feel satisfying at all (although I did like some of the camera work and effects for Tusk, Glacius and Sabrewulf). They felt…simultaneously overdone in the worst way, and kind of cliched in parts, with a lot of reused assets. I mean, Jago doing a spirit bomb? Okay, I can kind of picture it. Fulgore’s laser? Figured as much. Hisako’s was kind of a given, but the animation of the faces? Oof. And that’s not even pointing out the problems with the poses and sound effect for characters’ bodies snapping in her Ultimate. The others…a lot of the problems with the Ultimates by IG in general is that all felt like an afterthought, that they were all just done with the “good enough” approach, with their taking too much influence from anime in some cases. Even worse, that whole thing with making it kind of ambiguous in certain parts by not showing a decapitation like in Jago’s. I’m not saying that they should, but there are so many things one can do with camera work, sound, etc. Looking back at the Ultimate Double Helix originally made for Shago, while it was kind of flashy, if not a little overdone, you were able to see the consequences and impact, with the character lying lifelessly on the ground not breathing. Simple, but effective. In IG’s case? There’s no sense of impact or dread. “Oh, Shago might have cut his downed opponent. We’re just not going to show you.” The Ultimates IG made just felt…empty. Impotent.

I think what made the originals great was that they were both creepy, intense and stood out. They felt brutal. Like, yeah, you didn’t see Riptor eat someone, let alone gut someone, just her with a bloated stomach and her belching and farting, but by the same token, though, that move highlighted her snake-like nature. The concept of being eaten whole (and while one was still alive) by a snake is in itself terrifying to think about. The belches and farts were little touches of dark humor to add some brevity. Current Riptor’s? I absolutely despised it as a Riptor fan; not only was it too cutesy, but it made a joke of my favorite character. F#ck that. Even though the early games were never as gory as “Mortal Kombat”, they did have at least some gore. After all, this is a game premised on the idea of a televised bloodsport, a tournament to the death. The original game had an oppressive and dark atmosphere, something that was hinted at very strongly in its overall presentation, similar to “Terminators” 1 and 2. They were over the top, sure, but they were also violent and brutal. The current game kind of has it in places, but that aspect is kind of washed out overall. In that respect, I think KI would be better off having a Mature rating, in order to get a darker feel and atmosphere. It doesn’t have to be as gory as MK, but it needs at least some gore.

E.g. Jago prays and begins to walk away from his startled opponent. He looks behind him slightly and a car falls near to the opponent but doesn’t hit them. As the bewildered opponent looks around several cars of different makes and models fall down on top of the opponent. Their hand visible struggling before becoming still.

One Ultimate/No Mercy I want back is Riptor’s, just because it was both creepy and funny at the same time.

Max said something about the game should be like MS smash bros. I kinda like this notion, could be a way to bring in some really cool characters from MS back catalogue.

I’m the complete opposite. While I certainly encourage the use of guest characters in fighting games, the thing about KI, though, is that it has an identity of its own, and making it into a kind of MS Smash equivalent can really hurt the series. A lot of people see the fighters of KI as being like toys that one picks up and plays with, and that is absolutely the wrong way of looking at them; while it’s true a lot of the fighters are based off of some aspect of pop culture, they all have features that made them stood out. So, even though Riptor is unmistakably based off of the raptors from “Jurassic Park”, she still stood out and had distinguishing features such as the snake-like look, the scorpion-like tail that hung over the body, four scythe-like claws instead of one per foot, a humanoid-like frame and proportions, etc. Fulgore may have been based off of “Robocop”, “Terminator” and “Predator”, but it too also stood out from those characters such as the dual wrist blades (at least, before “Predators” 1 and 2), the weird juxtaposition of ninja and medieval knight, etc. The comic book aesthetic was also a distinguishing feature - I could see a lot of these characters fitting into the pages of something like “2000 A.D.” or the pages of Judge Dredd, something that could be drawn up by the likes of Simon Bisley or Todd McFarlane at their best.

It doesn’t surprise me that Rare isn’t interested in doing it, when was the last time that current team worked on a fighting game?

To be fair, the original KI team, as far as I am aware, never had worked on a fighting game either, prior to their developing KI1.

As I recall, you are correct.