Okay so I’m not particularly invested in the Tomb Raider franchise (I tried the reboot when it was free and couldn’t really get into it) but I think there are some people here who’ll be excited to see this bit from the Square Enix Facebook page. 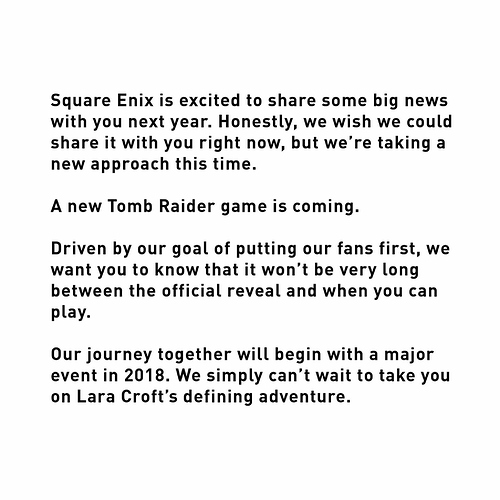 And you know what, I think this might be my favorite marketing campaign stunt ever. No overblown hype train, no big budget cinematic trailer or painfully scripted “gameplay footage”.
Just a note saying “Hey guys we’re making a new Lara Croft thing should be out next year k bye!”

I didn’t play the two new Tomb Raider games either, but I’ve seen let’s plays of them. I’m just not very good at shooters, but I like the stories and Lara Croft has always been a cool character, even in the reboot, imo. So it’s nice to see they continue the franchise.

See it was the opposite for me. Shooters are my bread and butter, and I’m sure I could get into the game mechanically if I could get to the gameplay part of it.
I have 41 minutes of gameplay on record according the Xbox LIVE, and I’m pretty confident I actually had control of Lara for about 10 minutes of that. Every 10 steps it felt like the camera was wrestled away to show me the vista I was already looking at or taking 3 times as long as necessary to explain the concept of “shoot the deer”.

I might try it again since it’s in my collection anyway, but I’ll need to make sure that the whole game isn’t like that first. Because just skimming through the menus it looked like there was a decent progression system, and both the game and it’s star are both very pretty.

Did the playthroughs you watched have decent stretches that were just uninterrupted gameplay? If so I might be able to sit through the tutorial/movie and have another go at it.

As a huge fan of the Tomb Raider franchise, treat the new games like a TV series. First hour is generally basics, then the rest of the campaign (12-20 hours depending on how much you like hunting collectables) is scattered with, “I just got a thing, and there’s an obstacle that requires thing.” Nothing super tutorial-y after a certain point.

There are a good bit cutscenes and a few (about 3-4) QTEs, but once you get into the meat of the game, the cutscenes are more to give you either emotional weight, or a critical plot-point to have animated rather than played.

Btw, collectables in the newer Tomb Raiders are useful for XP, crafting materials, and upgrades, as well as being fun puzzles. Rise of the Tomb Raider expands upon this a lot more, and is made a ton more enjoyable (imo) by doing so.

TR2013/RoTR open up a lot as you make progress through the main story. Kind of metroidvania-like, with new abilities gradually added to your arsenal that you then use to find optional areas and rewards by exploring and backtracking. They’re actually a pretty interesting take on the action-adventure shooter genre for it.

I really enjoyed both games. I wouldn’t say a sequel was an automatic buy for me but I’m definitely interested to see what they do. The marketing is very strange though. Makes me wonder if it might be a smaller game, like Guardians of Light or episodic like Hitman or something similar.

Yeah, Rise of the Tomb Raider opens up quite a bit after the first stretch. It maintains the Uncharted-esque holy crap this thing is crumbling right as I cross it

thing, but overall it’s not overly cutscene heavy IMO. I enjoyed the game a lot actually.

The extra DLC is really cool too. Survival mode, Darkness descends mode, and the VR mode on PS4

I really enjoyed the DLC Babba Yagga… that was really good!