Several talented people from the KI Discord and myself are trying to get a new community project going called Devil’s Landing. It’s an online exhibition series where we get about two sets of First to Sevens streamed with players willing to play those sets. We’re allowing beginners, intermediate, and advanced players to join in on the fun! We’re also offering commentary spots to people who are seasoned experts and people that would like to get their foot in the door and start practicing commentary and build up a reel to show off.

Before we get any of this under way though, we’re trying to get some things ironed out. First, we’re wanting to know what days work best for competitors, commentators, and viewers so I set up a poll on twitter asking people what works best for them.

We’ll have these streamed and then archived on YouTube with a Twitter page that will keep people up to date on when the streams and archives go live.

Let’s all have fun with this!

Awesome idea. Will be rooting for you guys’ success - hopefully lots of ppl decide to participate!

Thanks for the words of encouragement!

Everyone from the forums here are more than welcome to join in on this as either a player or commentator as this is ultimately a way for all KI players to hopefully have fun and enjoy themselves!

And my axe!, Errrr, naginata!

Yeah, come watch me get bodied

Where was this streamed so I can watch the VOD?

Here are the yt games

I apologize for not linking the pages!

A recommendation I’m thinking of for the series is to probably take a few clips from your sets and post them to social media to increase exposure. Some cool moments, some funny moments, some smart reads, commentary bits, whatever you feel strong in promoting. I’d use these in the days between your exhibition sets to keep the show on people’s minds as well as look to generate some new interest.

This coming week might not be great with Combo Breaker on the horizon, but the week after would be a pretty good opportunity to try to capitalize on.

I would definitely love to do that, I just need to get good at cutting up clips and deciding what is and what isn’t noteworthy to post, you know what I mean?

Twitch gives you the ability to create clips and I think you can do it from both live and past broadcasts. If there’s a means to download those clips, that’s a good bit of editing and encoding done via Twitch’s platform.

As far as noteworthy, kinda on you to decide I think. There were plenty of goofy moments on commentary, a few clutch plays that could be pimped out, and a few weird interactions of note. There’s plenty of room and opportunity (and chances to experiment) with how you want to develop your presence.

In 1 hour we’ll be going live with a new episode of Devil’s Landing, the online KI exhibition series. We’ll be streaming at https://twitch.tv/devilslanding if anyone here is interested in seeing some FT7’s going down on stream. This is who we have as part of our lineup for the evening 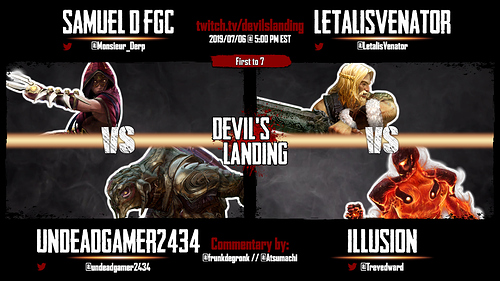 We are live! Join us as we prepare our first match of the evening, Samuel D FGC vs Undeadgamer2434 https://twitch.tv/devilslanding

If you missed our broadcast last night, we have the VOD up on our YouTube! Non-commentary versions are soon to follow!

And we’re live, our first match of the evening is @keogamer vs @CrashOkami ! Tune into https://twitch.tv/devilslanding

Enjoyed the matches and hanging out. Probably won’t be catching another one any time soon, but glad I was able to see one live