Now that Microsoft has acquired ninja theory, maybe the killer instinct development team can ask for permission to add Senua from Hellblade to the roster.

I’m thinking maybe giving her some ice or fire magic spells since she’s a one handed fighter. Also, changing the appearance of the world around her (her shadow move) manipulating falls since she suffers from psychosis. Also having arms come out the floor and holding you briefly or summoning one of those big guys to fight alongside her.

Just saying maybe the next game

If there is a next game, then yeah, I can see her as a possible guest character.

Fulgore and Eagle are nothing alike. Fulgore is a balanced/shoto type of character, whereas Eagle is a pure zoner with long-range setups. Now if you had said Kilgore I would have believed you, since Kilgore is just Fulgore with a better keepaway game.

Besides it makes sense people wanted Eagle, since literally everyone else from KI lore was made playable in this game. And after seeing how the other guests turned out, I don’t doubt they would’ve made Joanna great, but after Season 3 the budget was clearly against them. It was a miracle Eagle turned out as good as he did, he could have easily just been a remix of an existing character (like Kilgore as I mentioned earlier).

You may have missed the reference 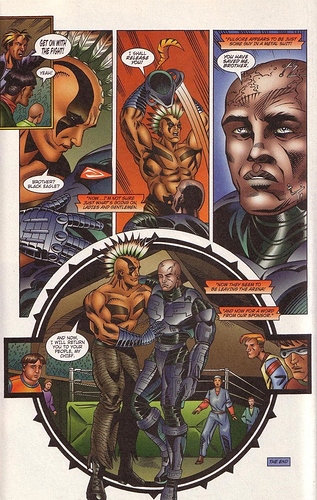 Nah I knew that already, but it’s not even canon in this reboot timeline. Besides, your first post betrayed any sarcasm you had in your second post; part of me thought you were just bashing Eagle again, not making a reference to the old comics. But I guess that’s proof I’m not cut out to be water (cause I got no flow apparently).