I’m not really sure what’s happening with the first segment where she summons the dragon, it goes through Wulf, and returns to her, or maybe why that portion is necessary.

The riding the dragon isn’t a bad touch, though I could see it being a prelude to an Ultimate Dragon Kick. The Nunchaku launcher into the “ride the Dragon” kick would be pretty cool, especially if set against that moon for a silhoutte. Also, she’ll have to land before the “Ultimate” announcer sound byte plays, since the announcer always waits until the action freeze to say anything.

This is a pretty good idea. Would make some changes to the execution, but still a good idea.

Also, you created duplicate threads, so you may wanna merge them or delete one. Keeps the discussion focused.

Lol. I knew the first reply was going to be someone saying they didn’t know what was going on. Thanks, but I liked my placing of the ultimate announcer more.That’s why I changed it. I thought of nunchuck launcher, but I felt Dragon whip would be a little more original. Thanks for the critique

Good work though! Yeah, I didn’t know what was going on when I first watched it, but it looks nice!

My life is complete.

I got a hell of a laugh by watching this, but now is time for the pros and cons.

Cons: This will never happen unfortunately because many people will find this golden piece of comedy to be cringe.

I got a hell of a laugh by watching this, but now is time for the pros and cons.

Cons: This will never happen unfortunately because many people will find this golden piece of comedy to be cringe.

also at @IronFlame I think the dragon was trying to get Wulf, but he dodged and freaked out was meant to be a distraction for what the real hurt that was coming.

Keep it up dude. Make Riptor next! Or Fulgore with a giant hype beam of death!

I am sure I saw what is happening. The dragon usually encircles Kim, so for ultimate it’s proceeding to circle around sabrewulf so that’s the frames we see the dragon left to right and encircling wulf to collect Kim so that she rides it into the nunchuck launcher.

I didn’t see wulf dodging, he’s only being encircled by the dragon as that’s what our view of the action is.

Yeah. I actually trimmed some frames out, where it showed a first person view going towards wulf. I’m no longer on vacation, so I won’t have as much time, but I really want to start this one. 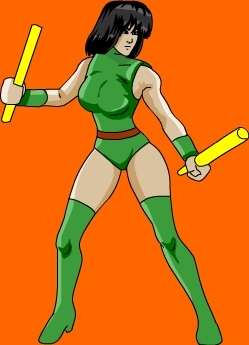 I’ll give her bigger lips in the closer scenes. Didn’t mean to make her look like a tan Jennifer Aniston. lol

Very nice and not bad at all either