Hey everyone, I’ve been enjoying Shadow Lords and the Mimic skins for a while and have had some feedback about them I wanted to get off my chest in a constructive manner and since we’re seeing more recolors in the form of Shadows and Gold skins I felt like the time to speak up was now. Please take this with grain of salt, knowing that these are little nit-picky but I genuinely want to improve the skins as much as we can so everyone enjoys them. I know a lot of folks have been ragging on the skins since Shadow Lords dropped due to some of these glaring issues and I can relate to their frustrations, so here are a list of things that I and others I’ve discussed this with feel would greatly improve the way Mimics and Shadows are perceived and enjoyed.

I’m going to keep updating this post with ideas and images to illustrate our points and hopefully improve the Mimics, Shadows and any other recolors we might see. (Red mimic recolors plz!)

#Make them a solid color:

Just look at the new gold skins, they’re gold from head to toe. Their skin is gold, their clothes are gold, their accessories are gold, their eyes, teeth, they’re solid KI gold and it looks phenomenal. Mimics and Shadows however have default clothing colors, hair mouth parts, etc that clash terribly with their skins. Make them a solid color theme like the gold skins and I guarantee most of the complaints about said skins will dissipate like a vanquished shadow clone under Eyedol’s mighty hoof. 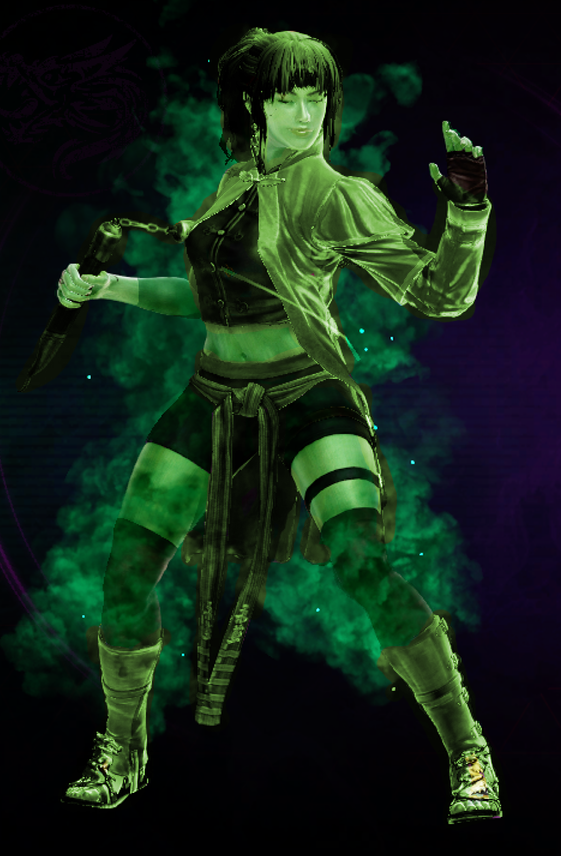 Forgive my horrible sloppy recolor rush-job but take a look at this, Kim’s Mimic is highly regarded as one of the ugliest in the game, simply color all of her clothes, hair, eyes and internal mouth parts green and the problem is solved. Suddenly the worst skin in the game is not so bad, in fact I think it looks pretty dope.

One thing that bugs me about Mimics and Shadows is a lack of consistency in their artistic designs. One would assume by looking at them that all “organic” matter would be the color of the skin, right? That would include hair, tongues, claws, nails, horns, etc. A lot of the flak that they receive is due to the glaring inconsistencies in their quality. Why are Fulgore’s plasma blades green/purple but Riptor’s remain blue? They’re made of the same material aren’t they? Why is the insides of Mimic Gargos’ mouth green but mouth of Shadow Gargos is a pink fleshy tone? Some characters with glowing eyes have their eye color change with the skins, however some like Shadow Jago’s remain default blue. These inconsistencies really hurt the perceived quality of the skins.

I’ll give them props though, they updated Cinder’s skin so its now a solid color and it looks 100% better now. They updated ARIA’s Mimic so her drones now take on the color of the skin, instead of using the default and they changed the hex patter on Riptor’s skin to green from blue so they are listening and improving the skins. However there are still a few that slipped though, such as Omen’s Mimic & Shadow having default blue “mist” VFX on his body despite the fact is it should match his skin color. (Also, why is Shadow Omen half blue? x_x) 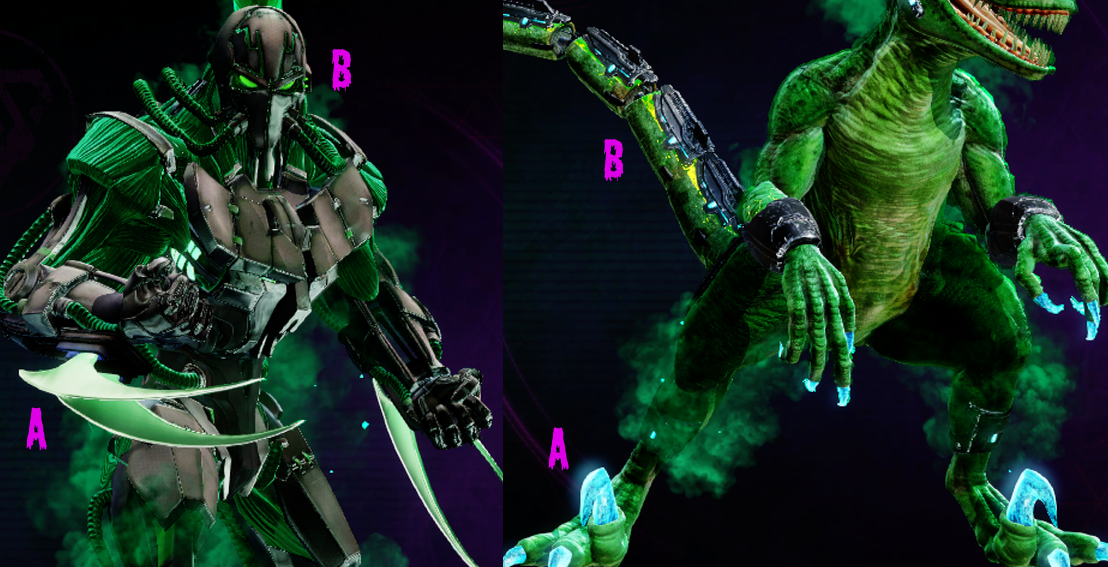 In the first image we see Fulgore and Riptor, both of whom posses Ultratech upgrades. At point A you see their plasma blades, on Fulgore the blades are recolored green and they look amazing while on Riptor they’re blue and look out of place. Theyr’e both supposed to be made of the same material, so why are they different colors? Point B is showing how Fulgore’s lights are also green on his face, to match his skin and they look perfect yet Riptor’s lights are still blue, like her claws. Fulgore’s ponytail is also recolored but Riptor’s organics in her mouth remain flesh tone. 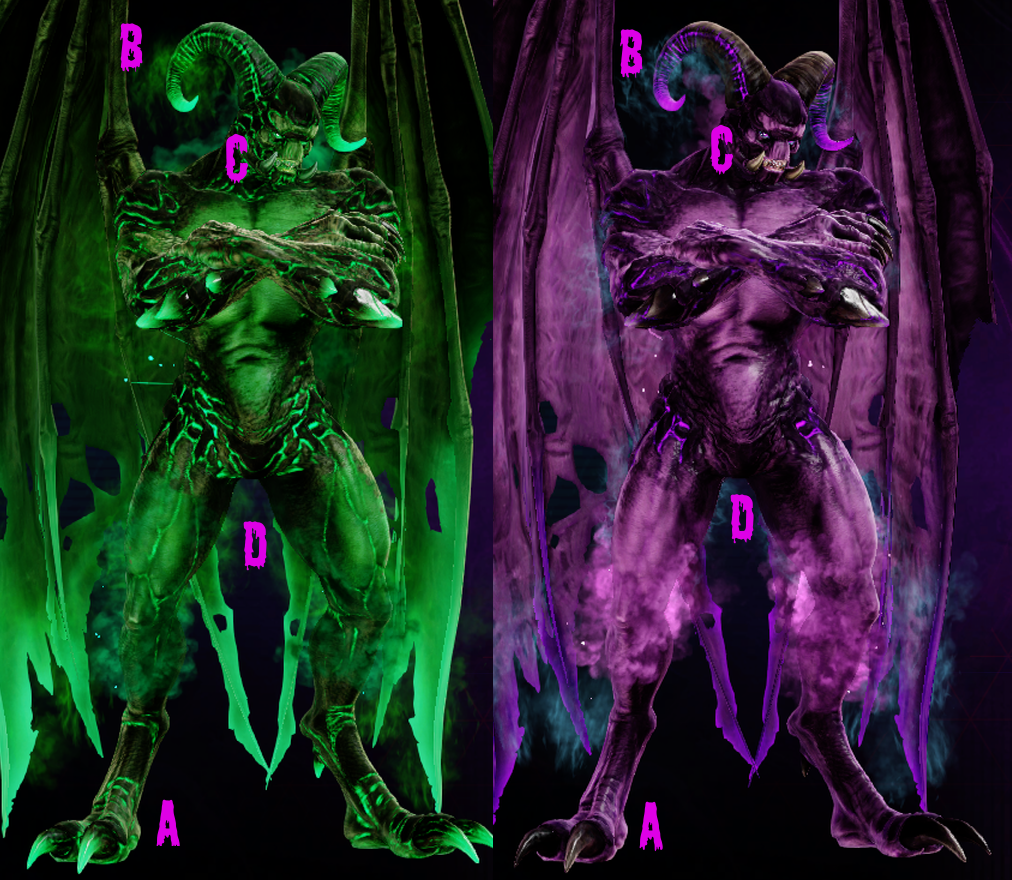 Here we see Gargos’ mimic and shadow, point A shows how his claws on one skin are recolored and glowing and they aren’t recolored on the other. B shows us that mimic Gargos’ horns are also recolored but the shadow’s aren’t as well as how the mist VFX are green on one and for some reason blue on the other. C shows that mimic Gargos’ face and mouth are green, with glowing green eyes, features shadow Gargos lacks… and D clearly mimic Gargos was a recolor of his color 9 and also shares the highlighted cracks in his skin but his shadow doesn’t 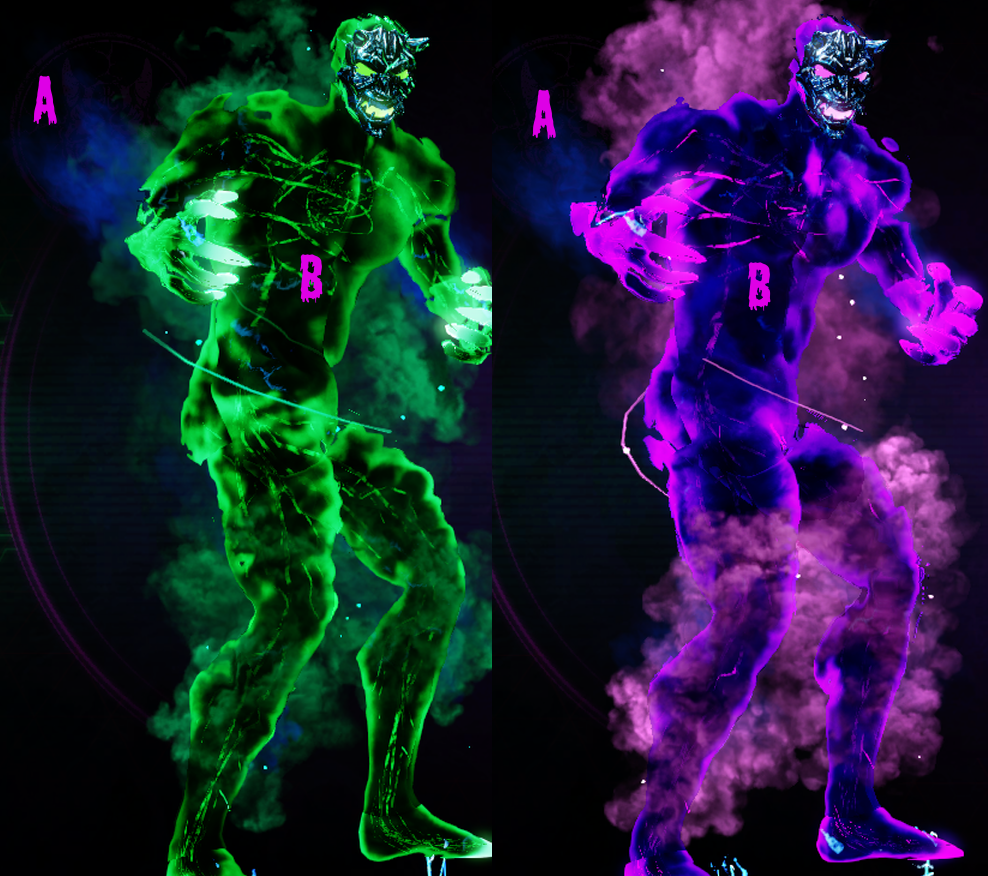 This is Omen, A shows us that on both his mimic and shadow his default particle effects are still blue for some reason despite them matching his skin tone on every other skin he has. As for B, why is it that his mimic has a black “core” color and the shadow is blue inside? The shadow would look much better with a black “core” as well, most people have been asking for a true purple Omen for a long time and this isn’t what they expected.

Mimics and Shadows are an awesome feature, I really love the theme and the premise behind them but visually they’re lackluster for many of the reasons I’ve listed above. Small things like making all of their eyes a glowing green/purple color to further distinguish them as non-human monsters would go a long way to make them more popular and appealing. More consistent VFX for the smoke particles for example, some have said its odd that the legs have big fog emitters attached to them and it looks strange. Maybe reduce the particles and add smaller emitters on the thighs and feet to more evenly spread the effects? Giving the mimics green blood and the shadows purple blood is another example of a small detail that would go a long way towards making them more amazing, I posted up that topic about changing Riptor’s blood color so I don’t think this request is farfetched at all. We’ve already got green and purple blood in the game on Sabrewulf and Riptor so it shouldn’t be a stretch to apply it to the skins! 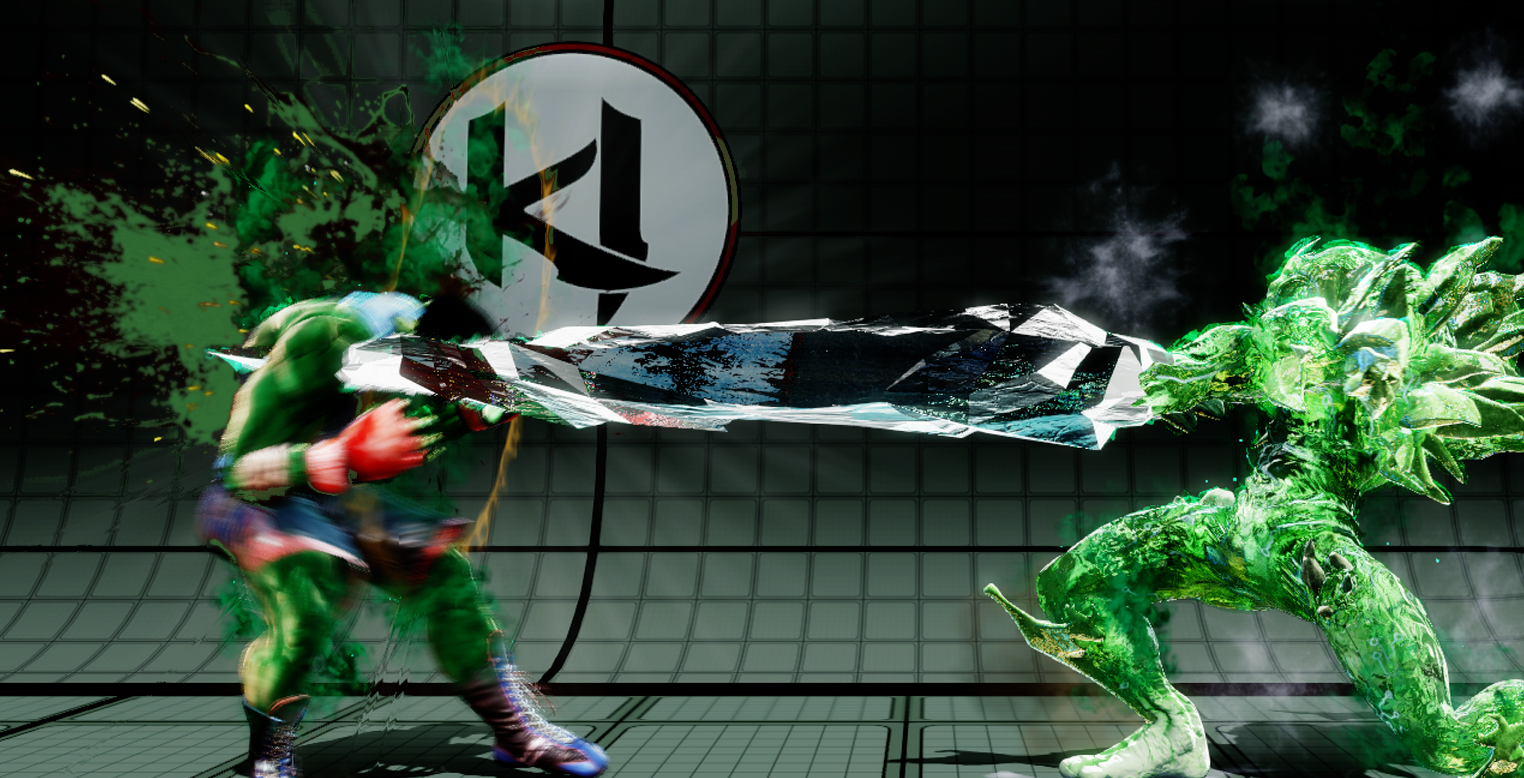 Check out this TJ mimic with green blood! You can’t tell me that doesn’t look much cooler! 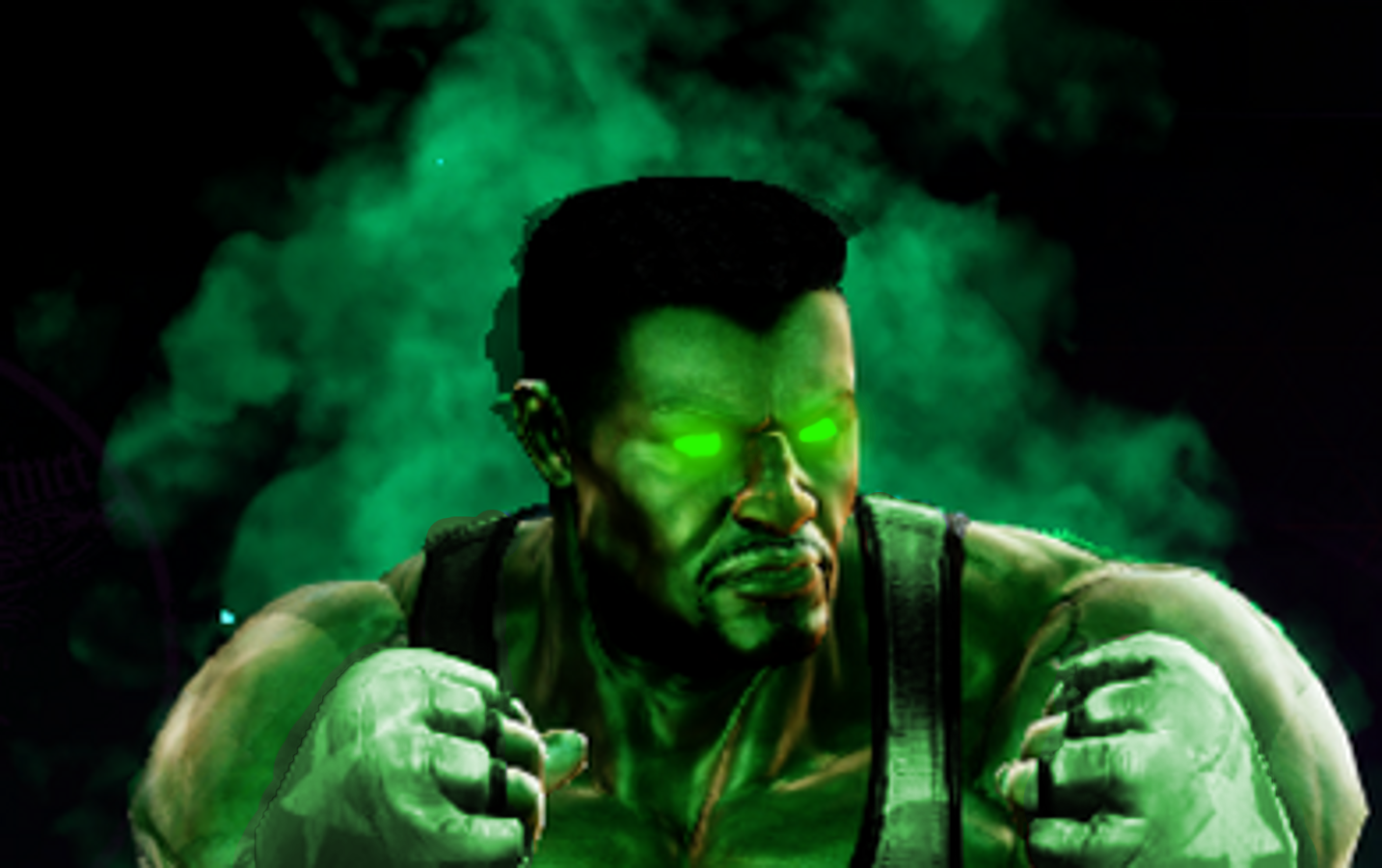 Or how about TJ with glowing green mimic eyes?

On the topic of improvements, and not sure it has been mentioned, but Retro Fulgore’s eyes are supposed (?) to be Green.

Good point, thanks for bringing it up. That sort of stuff is exactly what I’m talking about.

what about specific accessories to make it different, like a pair of Sais for Orchid, Jago has a Demonic Mask, Tusk gets a Corrupted Wargram, or maybe TJ Combo gets a Pair of Claws for gloves

That is going above and beyond but I love where you’re headed with it, odds are those would have to be sold in the store to warrant the amount of effort needed to create them but I’d be willing to pay. Some shadow themed accessories for everyone would be a best seller, especially if they resembled Shadow Jago’s accessories.

that’s another thing, give the shadow skins the option to have the Shadow Jago variant mask as well

thanks man. u hit all the issues I saw. doubt they’re gonna rework these skins. which is unfortunate. if the later skins are improved then that leaves this first round of poor quality skins out in the cold. who knows, maybe it’s not too late

This updated fixed several of the skins, I think there’s still a good chance of seeing them updated. I’m sure they’d sell a lot better if they didn’t look so funky.

I kinda hate that Cinder’s flames were changed now his mimic skin just looks like one of the old green Cinders. Why bother picking it? it’s just green with smoke. >___>

For Riptor, I’d suggest a dark green or black for her mouth so it at least sticks out.

Personally I think while they are at it. Make the mimic’s projectiles match to. That will at least be interesting.

While I disagree on the Cinder point I can understand where you’re coming from, I simply think for the sake of consistency and overall appearance all of the skins should be solid green/purple just like the gold skins. No clashing colors, maybe Cinder’s terror skin will have two colored flames but for the mimic I think the solid color looks… solid.

I’d completely agree with you on the projectiles and VFX too, would be nice if cinder’s blood was green instead of orange. If Jago’s fireballs and instinct particles were green as well. If Glacius’ ice was tinted green, TJ’s blue FX green as well.

What’s really weird is mimic sadira with the genie head accessory. If you want consistency then this’ll make you cringe.

Well accessories aren’t really on the table, those are kinda out of the ballpark. Does it glitch out or something? lol

right but now it’s just a green cinder with smoke. what makes it special? Sure you can say for alot of the mimic skins, it’s the green color. But seeing as Cinder has two green colors that’s really all that it is. Aesthetic choice beats possible uniqueness I suppose : p That was one of the reasons I was gonna get it for the neat orange/red flames on green color. But I think I’m just gonna pass on it now.

Now on that note with VFX if they do change the colors of the projectiles I think that’d be cool because that’d be just another reason to buy them. Though I admit the only exception has to be Spinal where it’s kind of important to know what colors do what.

Though his shadow seering skull is big as ■■■■ and honestly it’s not hard to figure out when he shoots it at you.

I’d love to see the costumes be like something out of a MOBA, where they can change VFX and voice lines. Make a Jago costume where he’s a ninja and his fireballs are tigers or something.

I suggested some time ago in one thread that guests could use a reskin, creating an original KI character, using the guests gameplay mechanics:
-Raam could be a Frankestein monster. A monster which uses toxic clouds or electricity instead of Krill. He could be a failed Ultratech experiment, one of Gargos generals(pun intended), or the cursed general from Kan-Ra backstory
-Arbiter could be an old Glacius enemy, an alien from another part of the space, or a servo armor from Ultratech, with a human operating inside, using weaponry to fight
-Rash it’s the thought one, he could be a monster similar to Shuma Gorath(a shapeshifter). His taunt and “funny” animations could be changed to fit.

Gameplay wise, they would be the same(no difference between original and reskin), but the KI universe could be bigger

Yeah green body with smoke but the head is just regular it’s so weird.

Oh, that’s probably like Spinal’s Egyptian feet. The feet themselves don’t change color on the bones, regardless of what color you choose. Probably a case of Sadira’s head being “part of the accessory” something IG didn’t take into account that it would be a problem later.

Mimic Eyedol still has red/purple “Meat” in his head halfs but the shadow is purple on both.