Microsoft Store is not letting me download Killer Instinct 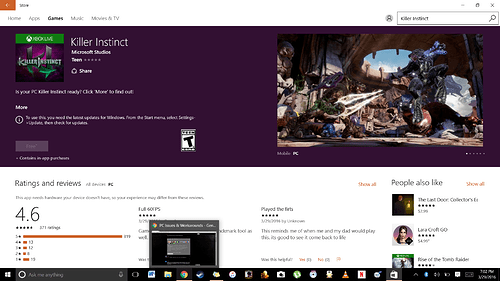 After trying to restart my computer, logging in/out of the microsoft store, it still is not letting me download KI. I went into settings to check my OS version and it says updated. My laptop is the Toshiba Satellite E45t-B.

it literally tells you what to do. which is update your windows software

I just did that on my settings and it says that the OS is updated.

I have the same problem too, I checked the OS, have the newest version, but it wont download.

Yeah man. I even check my requirements and whatnot and it checks out fine accroding to what the minimum requirement is. Oh well, gonna continue playing Street Fighter.

ok the pc version isn't up yet flip the switch someoneeee I need to buy it first on the X1 for the cross saves and still nothing :(

I can’t find anything.

think I found it

Check the build of your Win10 instal

How to perform a manual download, quote taken from someone on gaf

That’s why i did in the afternoon. It showed me the game but the button was grey. Went to update and hitted search for updates and showed me that there was an update i didn’t have. So just clicked to download it, it prompted me to a program that wasn’t compatible (Daemon tools, a dated version BTW) so i’ve to uninstall it and asked me for a date/hour at which it can be rebooted. I just told it to reboot now so the update could start and after a while it got installed and could click on the game to install it."