It was announced today that Microsoft has bought ZeniMax Media, who owns Bethesda and id Software. I didn’t see this coming, but it means that Fallout, DOOM, The Elder Scrolls, etc. are Microsoft franchises now.

This is pretty huge. MS just acquired a lot of different major and notable IPs all at once.

Do we know how this is going to affect the publishing structure for this group of devs? IIRC Bethesda Softworks handled publishing for ZeniMax. Will that function go directly to Microsoft now, or will it stay the same?

None of that has been announced yet, so we’ll need to see. But yeah, this is major, especially if Microsoft shifts all future titles from these franchises to their Xbox brand exclusively.

On an aside: Guest characters I’d now like to see in the next Killer Instinct:

Manimarcco would actually be my pick as he’s pretty nasty and a magic user. I’d love to see an actual mage character.

In the future though, it is likely new titles will be part of the Xbox/PC ecosystem exclusively. My only big question is if MS will keep releasing their games on Steam and such, or start to push their own app more.

Manimarcco would actually be my pick as he’s pretty nasty and a magic user. I’d love to see an actual mage character.

He’s also be an interesting choice, though I personally feel that Vivec fills that role (he is a living god).

We’ll have to see. Here’s the official announcement from Microsoft. The wording sounds like future titles are going to be Xbox-platform exclusive.

We’ll have to see. Here ’s the official announcement from Microsoft. The wording sounds like future titles are going to be Xbox-platform exclusive.

Yeah, I meant titles like Elder Scrolls 6, DOOM 3, and such are likely to be exclusive. But things like Deathloop and the DOOM Eternal DLC, which were already slated for non-Xbox platforms, aren’t going to have their situation changed at least for the near future. MS has been good about honoring the previous agreements of the studios they’ve bought so far. 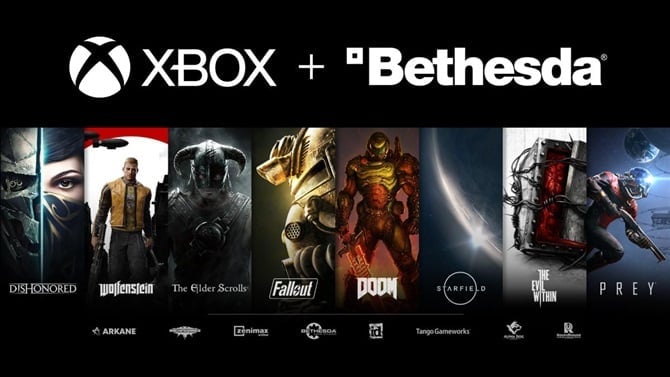 Microsoft has acquired ZeniMax Studios, parent company of Bethesda Softworks in a deal worth $7.5 billion. Microsft now owns iconic IPs such as The Elder Scrolls, Fallout, Doom, Dishonored and more.

The regulatory group was one of the biggest roadblocks standing in the way of Microsoft buying Bethesda.