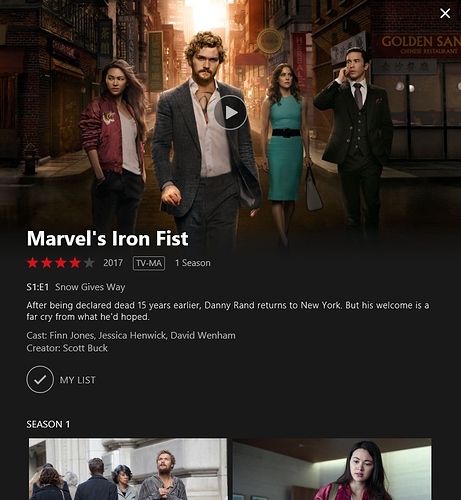 This should give me something to binge watch today. The Defenders should be right around the corner.

…do they have to use the presumed dead but is not dead and everyone hates him when he comes back thing that Arrow did? was iron fists origin so similar to green arrows and i didnt know?

I get where you are coming from, and Iron Fist has always had this background, but Iron Fist has a whole mystical angle and is gone for 15 years and returns to a world he barely remembers, and there is a dragon involved aswell as warrior monks, also he loses his entire family.

Arrow has family left, and learns to survive on an island that has mercenaries and is only gone for a few years.

Its like saying Green Arrow and Hawkeye are really similar because they both shoot arrows.

That said comic characters (and characters in general in fiction) have some overlap all the time, batman and Iron Man are both rich playboys for example.

I’m 2 episodes in though and liking it a lot, I am however worried they are keeping the mystical parts in the back to much, we should already have seen an awesome full length scene in the mystical city. And let them show that the title of Iron Fist is also a mantle that gets passed on in a way by proving your worth in beating the dragon Shao Lao.
They could do awesome one shots (like the one Marco Polo had) about a previous Iron Fist in earlier times, they had Iron Fists that chanelled their chi through arrows, or even bullets (the previous Iron Fist).

They could also go with the tournament between the 7 mystical cities and their immortal Warriors, because besides Iron Fist there are Bride of Nine Spiders, Tigers Daughter, prince of Orphans, Fat Cobra, etc…
That would be a great season 2, I’m just afraid it would be to big for tv… 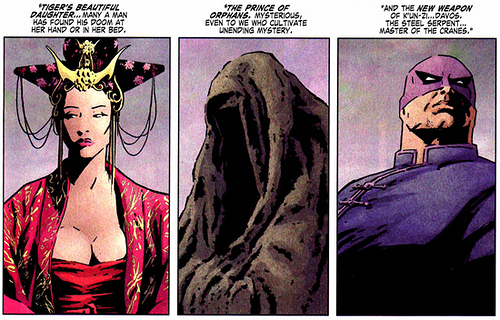 Its like saying Green Arrow and Hawkeye are really similar because they both shoot arrows.

…I mean…are they not similar …?

lol ok I jest. I don’t know much about iron fist origin so the mystical aspect is no doubt a game changer as well as the 15 years thing. As I saw with arrow ALOT can happen within a few years much less 15. I was gonna watch it anyway but thanks for the info. I will probably watch it tonight if all goes well

I heard from early reviews the beginning is kind of a slow burn, and disappointed a lot of reviewers, and while the slow burn thing is fairly obvious in the first 2 episodes (to me), I did have a good time with it. There’s a mystery that I want to hear more about and the characters are likable (or unlikable when they need to be).

Hope you enjoy it!

And curious how other people feel about it, hopefully spoiler as mich as possible since I dont know how much time I have this weekend.

…do they have to use the presumed dead but is not dead and everyone hates him when he comes back thing that Arrow did? was iron fists origin so similar to green arrows and i didnt know?

I believe if memory serves their stories are very similar in that regard.

As far as origins and comic book stories being original. Nothing is original. Certainly nothing in comics. "There’s nothing new under the sun " as they say. The trick is to make it interesting and appealing in the telling.