Major Issue with Communication with Iron Galaxy and Killer Instinct

Hello players of Killer Instinct and users of the Killer Instinct Forums. I’m making this page in hopes that the community can help me out in ways that those behind the scenes don’t seem to want to. This all started at the launch of season 3. As many of you may know, with the launch of not only season 3, but also the PC port, came many technical issues. This can be seen as understandable for any big launch and I was willing to let it go in the beginning. As many did, I went to the forums to get help with my problems as there were many threads on the topic of issues with the game and people were willing to help. Many of peoples issues were solved and most got the help they needed and deserved. I was still struggling as many of the solutions given to me by these people seemed to help others with similar issues to mine, but for some reason it was not solving my issue. To give you context, I had a problem accessing my season 1 characters on the PC version. This issue was not one that only I had. The difference between mine and theirs was that seemingly everyone was able to fix this except me. This was content I had paid for in 2013 at the launch of the title and I wanted to be able to access it. After many months had passed I finally decided to contact someone. I went to the dev team here on the forums. Nobody seemed to get back to me though. Eventually after a long while a nice member of the community who seemed to be more closely linked with the devs than I was helped reach out to the community manager for me. This in hindsight was the first sign as the people were more willing to help when i was specifically trying to contact the devs. Eventually I got into email contact with Colt one of the community managers. In the below images is the extent of our email chain which spanned many months ending with what seemed like just being ignored. Be sure to look at the dates between these emails. By the way the blacked out parts are just me blacking out my own email address or personal information. 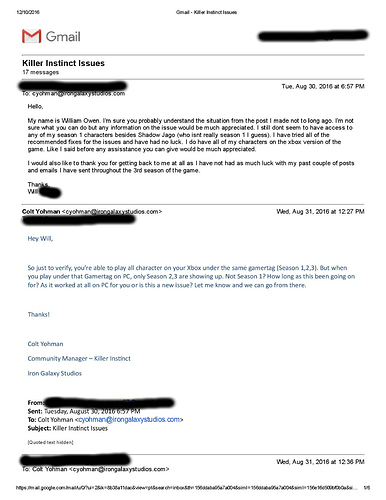 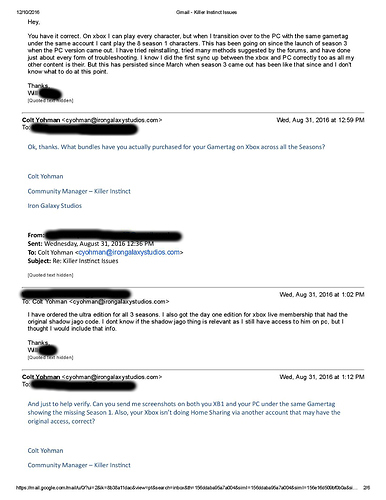 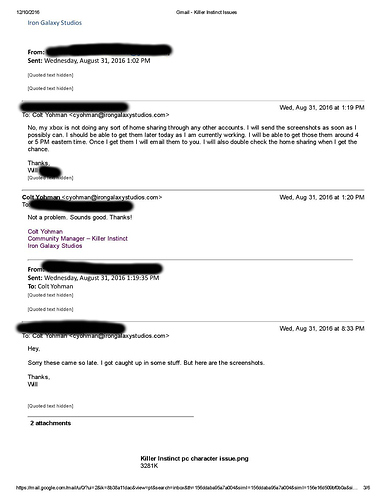 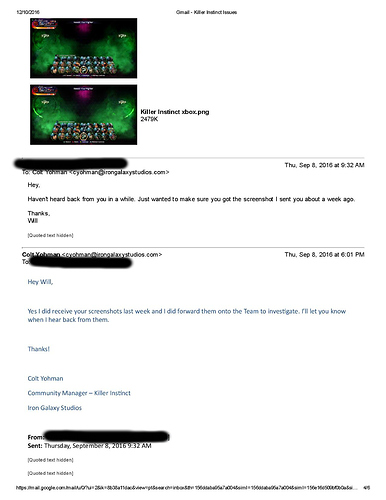 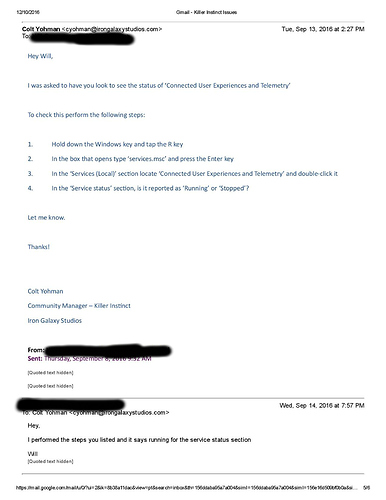 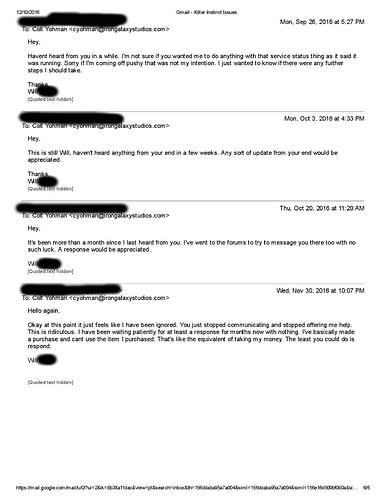 As you can see for quite a long time i got no sort of response. This was very frustrating. I even went back to the forums and tried contacting him again. It wasn’t until I went back to the help email on Iron Galaxy’s main website that I got some kind of response. It turns out Colt (the community manager who stopped responding to me) was no longer the community manager and left Iron Galaxy. Not only did he or anyone else fail to tell me this, but I also had no idea because until that point his KI forum profile was still listed as Killer Instinct Community manager this whole time. This was a poor move communication wise from the team. He either should have told them about the ongoing email chain regarding the issue or the new community manager should have asked about that when the old one left. It is their job to work with the community to the best they can and manage the community as it says right in the job title, and this only showed me that they failed in a big way doing that. But finally after getting in touch with the new community manager I decided to remain calm and give it a chance as you never know the circumstances of what is going on with them. So despite being extremely ■■■■■■ for me not only sending emails for months to an unattended inbox, but also sending messages to a forum user who was still listed as the community manger despite no longer working there and being inactive, I remained civil. So after explaining the issue once again to this new individual via email, and giving them a pdf of my previous email chain with Colt to bring them up to speed and explaining my warranted frustration, they promised to help. We passed emails back and forth for a while until they told me that they passed the info on to the actual team that works on the game and he would get back to me when he hears from them. At first I thought this was fine and great until eventually much time passed and I didn’t hear from him. I emailed them again and got the same message of “waiting to hear from the team”. This went on for several months. Sometimes I would get a fast response, while other times I would have to send another email just to hear back and get an update that basically nothing has happened. I can’t put all my frustration towards those I was in contact with, as the team doesn’t seem to be giving him any info to tell me either, but still, with the big gaps in contact it makes it seem like they just brushed it aside and forgot about it even though they are supposed to help the community. At this point after dealing with these two I was fed up. There were up to four month gaps between communication. I don’t know about you but if it took that long I would at least send the person with the issue an update without them having to contact you first and go and talk to the team again in a more serious manner to try to help the person who just wants to be able to play what they payed for. Below is the chain of emails with the second community manager I had to deal with. Once again I blacked out my email address and any other personal information. 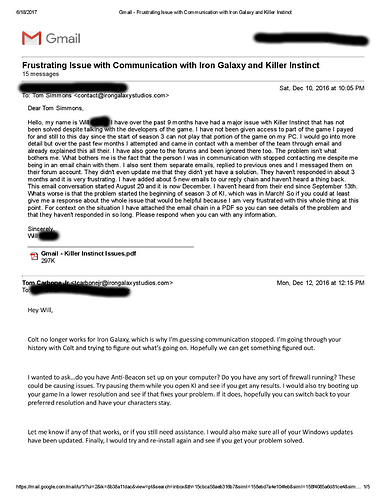 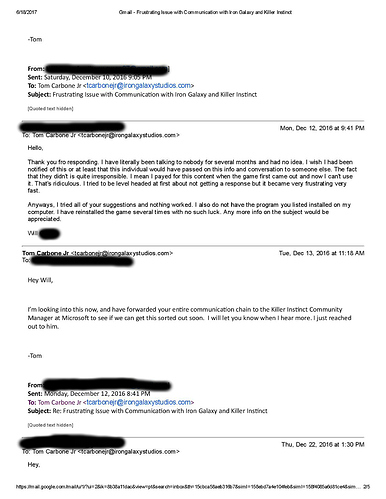 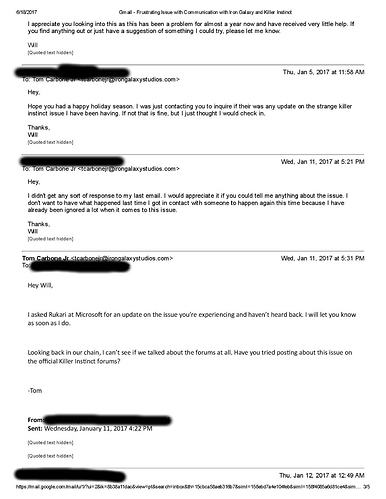 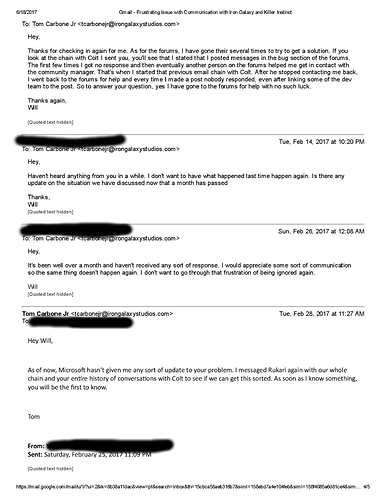 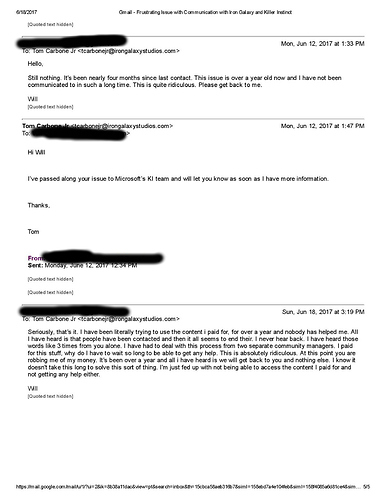 So as you can probably tell from my last email I am fed up with this. I have had this issue for more than a year now and have had little to no help. And I would never hear back unless I sent them another email reminding them to update. Even an update saying we have nothing would have been nice but instead I would have to send several emails to hear the same thing I have been hearing for about half a year now. To be honest this issue shouldn’t take this long to solve. Others had similar problems. I honestly doubt this issue could be this big that it takes a year. The more likely thing that happened is nobody is doing anything or they are doing the minimum. I hate to get like this and post all this but at this point I don’t know what else to do except put it into the hands of the community. I am hoping you will be able to have more of an impact on this situation then anyone behind the scenes was able to. Because this is absolutely unacceptable. Not only with the fact that I can’t use what I paid for, but also the fact that I have had almost no help with this issue.

Thank you to those that took the time to read all this. I know it was a lot. And anything you could do would be much appreciated.

UPDATE: Now that I have showed that I am agitated by the situation, I seem to be being ignored again through my email contact with the community manager. I am fed up with this. It’s ridiculous!

@TotalJimkata James, can you please hook this guy up with S1 characters? He looks to be legit.
Seems like he has gone through a ton of trouble.

call Microsoft customer support. demand a refund and make sure they delete your liscense to play killer instinct from PC and Xbox live.delete all the games and save file associated with the account as well. make sure to tell the rep you will repurchase everything once the refund is complete. tell them to also give u a new liscense to play the game, not reinstate the old one. hope it helps

I should also add that IG are largely incompetent and ■■■■■ things up 90% of the time. I got banned for two weeks from the forum and it trickled down all the way to my xbox live account and couldn’t access KI multiplayer for 3 days. it’s not that they don’t care. it’s just that they don’t know how to fix anything.

I should also add that a simple forum ban led to not being able to access any of my purchased skins or anything content related. if this game wants to survive I would suggest another Dev team be promoted to lead.

I will definitely consider doing that if this forum post doesn’t get me anywhere. Thanks for the response

I’d take my refund and walk if I had to deal with this amount of bullsh*t @will097. Honestly if you got shafted with no responses that hard, then just forget about having anything to do with IG after they wind up refunding you.

I think part of the problem is that you are barking up the wrong tree. IG doesn’t have anything to do with Microsoft’s sales and DRM system. So all they can do is forward your questions to MS. I have lots of sympathy for your situation but this is like yelling at your waitress because your credit card was declined. You need to go to Microsoft for this issue. You are assuming that this is some kind of KI bug, but it’s probably not.

The problem is every time I go to someone for help, I always end up being given a community managers email from IG or end up with the contact email for IG. I did try going to MS early on and didn’t get anywhere. Just opened a ticket which they didn’t ever resolve or get back to me on. It was very frustrating.

Don’t get me wrong, I’m not trying to minimize your frustration at all. It sucks that you can’t access this content on PC. I’m equally sure that people want to help but they just don’t know how. I would love to help you. I know it’s aggravating. But realistically, IG can’t provide personalized technical support to every user that has an issue with the game. And as always people take these examples and wildly extrapolate to talk about whether they care enough or whether they are competent developers etc. which is just not appropriate.

Have you tried going to a MS store in person? They usually have solid customer service when I’ve gone.

I’m sorry you’re going through this my friend. Believe me, I understand the frustration and struggle of trying to simply fix something that you have no control over.

My girlfriend and I had the unfortunate issue of crashing when attempting to connect with each other in EA’s Garden Warfare 2. Spent a solid few months of attempting to communicate with someone who took the matter seriously. When it was eventually fixed, I had sort of already lost interest from the constant trying, shame.

So in that sense, I can empathize with you. I suppose in that regard I wouldn’t necessarily say that IG has issues with communication as the gaming industry as a whole may have issues with reaching out to those in need. At least in my experiences with the issues I was unable to solve, it always became some sort of paradox that would lead me nowhere but the very start of the support because one person was incapable or impatient to solve the issue.

I wish I could help myself with you issue, but I’m not very knowledgeable when it comes to dealing with the Microsoft Store purchases and DLC unlike that of Steam or Origins. Good luck, I truly hope someone compensated you for the bologna you have to suffer through.