Is the Rest on the game disk? 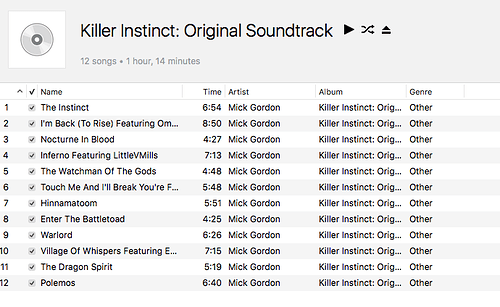 The rest is in the DE app on the XB1

How do i get that on my PC MR Sausk?

Are they playable in any sound device or just on Xbox?

this si what i dont know…

Something I noticed: Mick Gordon is the artist listed for ALL tracks, even the Season 3 ones. Should been listed Atlas Plug and Celldweller instead for the Season 3 tracks.

It could be an oversight though.

Only assumption I’ve concluded is it could be the creator’s personal playlist. But still odd nobody ever gave a heads up about this.

Why are all tracks not on the cd album? It’s a bit odd…

The complete soundtrack is in the game and not in the CD. Think of the CD as a bonus in addition to all that was advertised.

If I can’t and every time I want to listen to the definitive soundtrack I have to play it on my Xbox one I’ll be super annoyed.

The audio CD which did come as a bonus disc insert is limited in space due to its format (cd vs. mp3 or the like). The full soundtrack is available through the DE itself.

OK guys so just put this into my mac

So the sound track physical copy you get ONLY has 12 tracks on it. 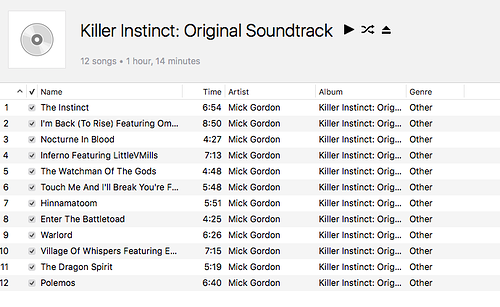 . Size or not it is disappointing.

No Arbiter or Ramm? Music?

So @rukizzel do u have to listen to the soundtrack via the definitive edition via my xbox?

In other words while im playing the music on my xbox one I’m not playing games or spending money on KI gold or at the Xbox store?

I can’t back ground music this FULL album while I play forza 3 or upload it to one drive to play on my Xbox Groove app?

Couldn’t we have added a DVD of the soundtrack? Least that way we could have added the music onto out players digitally rather than watching an Xbox screen while we enjoy the cuts?

Or we could have made it a download code for the MS store? I thought that was what azure was for

Does this leave us open to a definitive soundtrack for sale on amazon? Or a multi disk soundtrack?

FYI guys I have ultra all season and all the soundtracks digitally. I was expecting this album to be the KI album to kill all albums and the definitive product.

Some of you reading that might think why the he.ll did wanda buy the hard copy of KI as well the? Pretty much just for gargos gold skin and the sound track that I thought could travel in my pocket with me.

I’m a 100% happy to support this game by buying everything but I do feel this was a bum deal & a bit of a over sight.

Yes I understand file sizes but this is 2016 and we are buying from the biggest global tech firm!

Because it’s not a full ost… just a best of. Season 3 ost is out thus month. Plus you wouldn’t get all them tracks one 1 disc

In retrospect, a couple of the defiinitive season 3 tracks not included on the cd sound like demos.

I expected to have all of the soundtrack on the bonus cd as well, yet it included a lot of my faves including Hisako Orchid and Kim Wu so I was a bit happy. I had Glacius & Sadira from the season one and Kan Ra & Aganos from season 2 , & I mostly love the audio on the tracks but they aren’t including the Idle theme intervals (which makes a huge difference for most-)
or even the ultra song notes.

I gotta be honest while it’s cool that Rkosmik records all the variations & verses in the music, a lot of it doesn’t sound right, because of his by the numbers method.
Orchid’s and TJ Combo’s themes suffer the most from this because their themes are designed to be played like a typical song progression of verse-chorus-verse-chorus, but on his cuts all the verses come first and the choruses come after. It’s kind of jarring.

Have you heard AppealToTreason’s versions? I prefer them over RKosmiK’s.

Possibly, but if I did I wasn’t paying attention to the mixing.

RKosmik’s style of recording has greatly improved in Season 3, usually putting the chorus in at least twice.

Speaking of RKosmik, wonder if Shadow Jago’s theme is still in the works…