Just wanted to chime in and say that, as a person who doesn’t play often (not too much free time on my hands) and doesn’t really enjoy online modes, permanent Double XP and 18,000 KI Gold is a GREAT OFFER. As you can imagine, I have the game since late 2014 and have not yet even gone above level 20 on most characters - would take me years of grinding to get all the accessories, since I don’t get to play often. This is good news for me! The only way it could be even better? Free S3 Soundtrack download codes for Ultra buyers!

But really, I am happy as is. Extra characters and stages would be awesome too, obviously, but they shouldn’t be made exclusive to Ultra buyers.

Awesome, thanks man, appreciate it.

IF there were to be future dlc that can be bought with KI gold only then that’ll be cool and make the 18k KI gold worth it. Although, since it is a pre-order bonus, such information should be in today’s blog post to add motivation to pre-order and get that extra KI gold (apparently on release the amount of gold you get is decreasing if you didn’t pre-order ).

Umm, I guess this wasn’t directed at me?

Okay I’m starting to think the 18k gold is on purpose, we’ve been asking for more costumes/accessory sets for the last two seasons and people were upset at the prospect of having to pay extra for them, now they’re talking about “staying tuned” for info on KI gold exclusive content. Well by giving us “free” KI gold we can buy these new items without having to shell out “extra” money out of pocket. Ultra edition owners get all the content without paying more beyond the bundles, everyone wins.

If this price doesn’t work for you there are other options. The price is for the content you receive, the bonus items do not factor into that.

They told you can buy that and then log into PC without going for XBox. Also Infil said something like that: it’s just for progresses.

That means, if you have bought some KI Stuff for Xbox not owning it (like me), you just need to connect on Windows 10 Xbox app and you’re done: you get everything. You don’t need to go to your friend’s house and do that.

Things will be different if you played on Xbox One with your account once instead. In this case, you need to run the game again, expecially if you want to keep the levels and the stuff you unlocked by experience.

Moreover, due to misinformation, I think devs won’t have problems in shifting your content from Xbox to Windows 10 if gently asked. Right?

anyone mention or notice that the release date on xbox.com is 03/20/16? 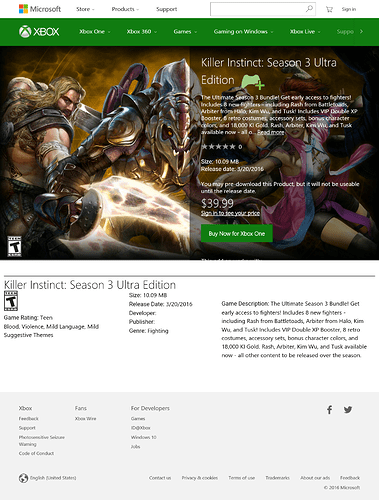 Thanks for the info. Then I can basically point my friends to the Xbox store if they want to pre-order.

Also for anyone who wants all seasons, apparently they are again putting S1 characters one at a time in Deal of the Week (Sabrewulf is there for $1) and also S2 is on sale.

@rukizzel, I feel like this waiting on that Bonus Color Blog! this is the initial release… 4 characters instead of two or one, & and entire PC Port, in addition to all listed above isn’t less stuff, plus the rebalance changes, and lighting also come on day 1… come on

The release date of 3/20 has been confirmed on KI’s twitter page and by @rukizzel here as a typo. The game comes out 3/29

Same with music and modes, you get that just by downloading the game.

Combo breaker pack is just to be able to select any character whenever you want and Utra is just for Combo Breaker pack plus extra stuff.

So if we compare only what the ultra editions give you that the basic download and combo breaker don’t:

Honestly the only way to know which season gave more is giving weight to each item, which is subjective.

Pc port? Hahaha… So?
I Have to pay more for that?

Less for the same price. Period.

This is what every videogames company do nowdays.

They do whatever they want, as a fan, you have no choice.

Pc port? Hahaha… So? I Have to pay more for that?

well done, taking the one point that suits your perspective and spinning it to favor yourself.

Honestly the only way to know which season gave more is giving weight to each item, which is subjective.