Seeing the original game was more or less a giant mishmash of all sorts of monsters, freaks and ghoul alike, thought it be a fun idea to mock up a couple of “Halloween” costumes for the original cast of characters. (Spirit of the season, and all that) 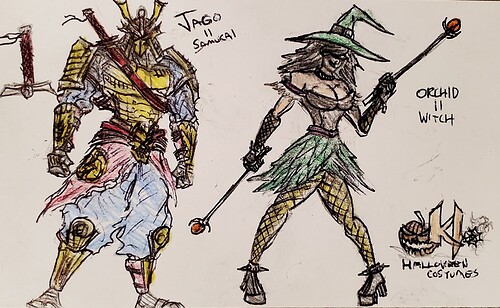 First, we have Jago, dawning traditional samurai armor to honor the fallen warriors of the past, while his sister Orchid goes for the titular “sexy witch” attire, with two magic wands to substitute her standard batons. 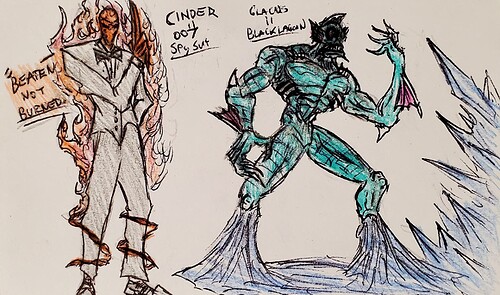 Next we have Cinder, looking classy as hell wearing a suit simmilar to the kind James Bond would usually wear. Seeing his connection with espionage, I felt it was a fitting match. Plus less we forget Rareware’s Goldeneye. (Also the suit is fire retardant, in case you were wondering.)

Then we have Glacius looking more like a bizzare Fishman simmilar to The Black Lagoon. Yeah this one might be stretching it a bit, but I wanted to go for something different. Plus with his usage of puddles and freakish voice, something about it just works. 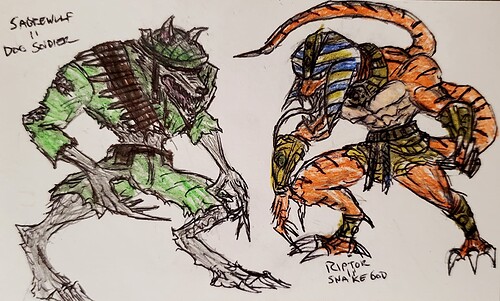 Sabrewulf looking like he just got off the set of the movie Dog Soldiers (Love that movie.) Taking literal meaning of the phrase “War Dog”.

Then we have Riptor, dressed in the fashion of an old Egyptian Pharoah Apopis, the Snake God. Vertigo from Primal Rage also played a small role in the design for inspiration. 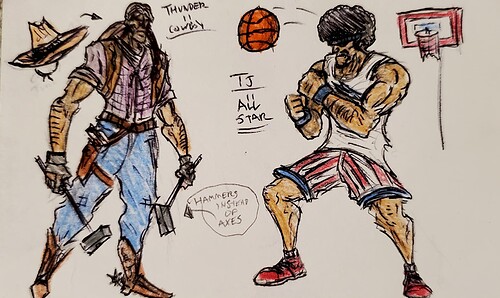 Thunder this time, sporting a cotton shirt, leather vest and boots, with a cowboy hat hanging off his back. Thought giving him some civilian cloths would do nicely, seeing most the time he’s always wearing warpaint and head-dresses. Plus the notion of “Cowboys vs Indians” played a big role in this decision.

Next we have TJ rocking an afro and a basketball uniform. Homaging the likes of The Harlem Globetrotters. Frankly I could see this as a possible secondary hobby of his, because it doesn’t have to be all about Boxing all the time. The guy can have other interests. Plus in regards to his theme from Killer Instinct 2, this costume fits perfectly when scoring a few rounds with that song playing. Has a very urban vibe to it, which is what I was going for here. 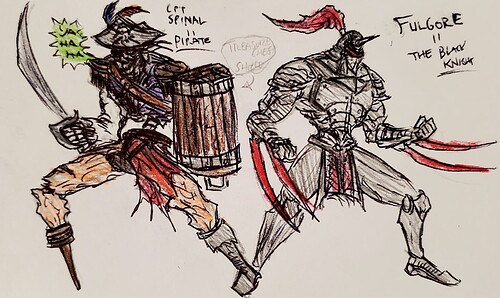 A traditional pirate costume for ye old Spinal, more so of One Eyed Willy from The Goonies. Plus his shield is now replaced by the lid of a broken treasure chest, just to add a little pizzazz to it all.

Fulgore, seeing how supposedly his armor is based on a Templar knight, only more futuristic. Here I decided to go the opposite direction in having it be actual knights armor this time. Painted jet black to mimic the legends of The Black Knight himself. Plus with a revamped visor, which along with his blades would glow blood red instead of the light blue we see on his default design. 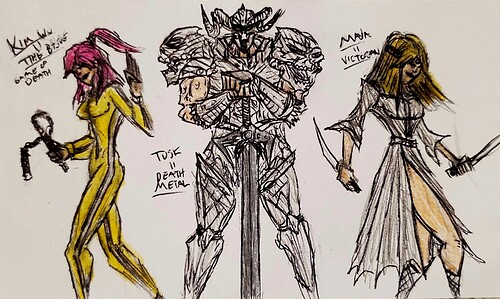 For Kim Wu, figured to go with none other than Bruce Lee’s iconic yellow jumpsuit ala Game of Death, or more appropriately The Bride from Kill Bill. (No shoe shots for you Tarantino.)

Next we have Tusk dawning what looks like something out of an Iron Maiden or Manowar album cover, with his theme of course mirroring Death Metal. Would be pretty wicked seeing the guy in a sick suit of armor and gear, considering his default design is just a basic Conan homage.

Lastly we have Maya, who I thought it’d be neat to give her a dress from the Victorian era, one thats pitch black to jive with the theme of the season. Plus guess you could say I gave it a little “Tarzan/Jane” influence, seeing that her default design being a simple jungle bikini, but here she’s more refined and “lady-like” for lack of a better term. With two large kitchen knives to replace her twin daggers.

Guess you could also consider Maya’s as a “Bloody Mary” influence, of course if I decided to add more splotches of red on her gown.

But with all that said, thats basically about it. Again I only wanted to cover the classic characters, as I didn’t want to over-complicate things too much, but just felt like sharing these sketches for those who are interested.

Then we have Riptor, dressed in the fashion of an old Egyptian Pharoah Apopis, the Snake God. Vertigo from Primal Rage also played a small role in the design for inspiration.

Vertigo is one of y favs in Primal rage along with Veritgo.

the inspiration of Apophis (or as I’d like to call him Apep) is also a nice touch. 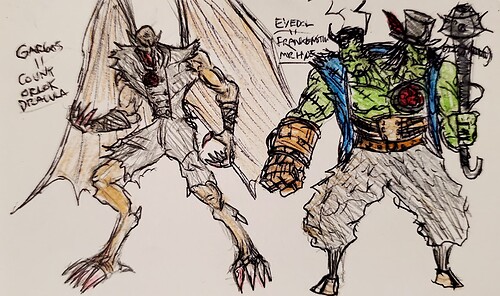 Yes closing this little group of sketches with none only than the two final bosses of both KI 1 and 2. So with out further adieu, let’s wrap this up.

Gargos was pretty simple, seeing his bald head and giant bat wings lead me to using the original Dracula as inspiration. But not your normal Dracula, rather the oldest version to film media, Count Orlock from Nosferatu. If we’re gonna pay homages, might as well go for the original grandmaster of vampires in movies.

Now for Eyedol, figured to knock out two birds with one stone, as of course he has two heads/personalities. So I decided to go with Frankenstien, being a giant walking body if sewed together pieces, with even a giant mechanical hand for his right arm. Even having his heart exposed under a glass casing embedded onto his chest.

But that’s not all, for his other head, thought it’d be a neat idea to have the head of Mr Hyde as well, since having a split personality seems more than appropriate. And with said Hyde side, his hand would hold a walking cane infused with several gears, bolts and machinery to form his massive club. Pretty nifty ain’t it?

Welp that about wraps it up, not sure if anyone really cares too much about these little doodles, but just wanted to share some ideas that, at this rate, won’t ever see the light of day.

DUDE! I LOVE this! I love all of these designs, especially the Jago Samurai outfit! 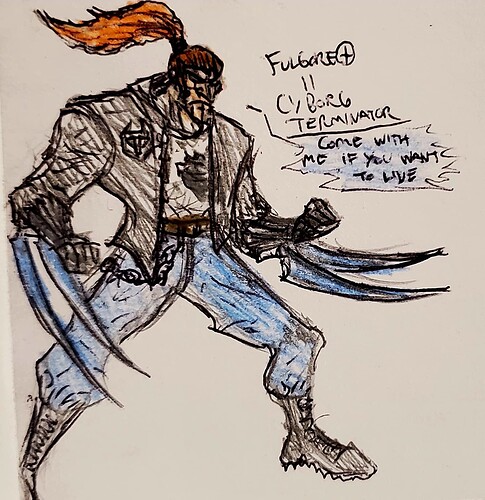 Originally this was the idea I would use for Fulgore, but I decided to use the black knight template instead. But I’d still like to showcase what I was going for, that of a typical Terminator homage. This time having Fulgores face perfectly visible as a normal human male, with some lines on his face to still show off the cybernetics.

Plus with his hands and chest ripped open exposing metal components, and the classic ultratech logo on his jacket, just thought it’d be a neat twist on the character. Almost gives me Duke Nukem vibes for some reason.

Last image with all sketches accounted for, with a small mock-up doodle in the bottom corner just to showcase the brainstorming phase when making these drawings. 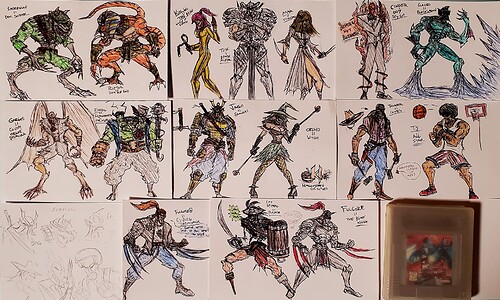 Appreciated all the feedback, hope some of you guys got mild enjoyment from it, it was a fun project to try out, albiet only covering the classics.