Helloz all! Well another problem by me. hmmm today I bought and my Killer Def.Edition. But i have this problem, redeem the code for gold Gargos but i cant download free the 2nd gold pack. Any help?
(i reboot my xbox, clean chace but nothing) 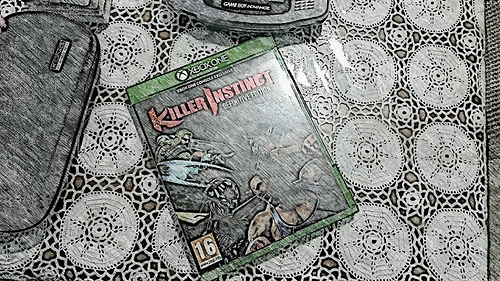 if is in wrong section PLEASE transferit

I’m not sure if that’s still going on anymore though do not take my word for it I may be wrong. @rukizzel is this a bug or is the promotion no longer available?

I’m not sure if that’s still going on anymore though do not take my word for it I may be wrong. @rukizzel is this a bug or is the promotion no longer available?

thanks for the tag sir.

No problem I just hope it gets resolved.

That was a limited promotion.
I cannot confirm that you won’t get it for free, but I do know that’s the one thing that even made me finally download Gargos skins from my definitive edition purchase, so I could get gold orchid- which in turn I had to get Kims gold skin so it was natural to buy the gold skin pack 1

So, is limited promo? Sure for this? @IronGalaxy @rukizzel
What saying about that? What happens here?

plus: here nothing sayng about limited time available 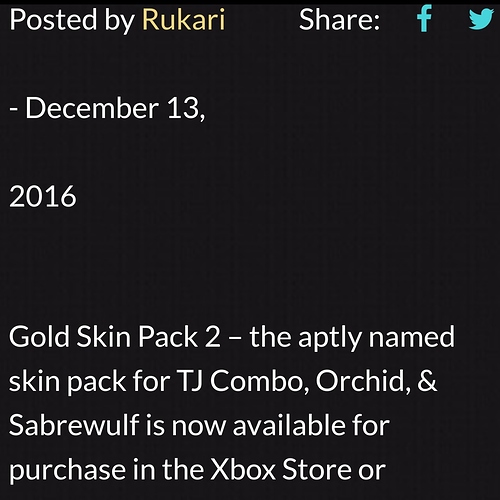 Helloz all! Well another problem by me. hmmm today I bought and my Killer Def.Edition. But i have this problem, redeem the code for gold Gargos but i cant download free the 2nd gold pack. Any help? (i reboot my xbox, clean chace but nothing)

Did You try and download the Gold skin pack through the in KI game store when You are logged in?
I actually only downloaded the free gold skin pack about 1,5 week ago.
I did activate my Gargos gold skin code right after I purchased the Definitive edition, perhaps that has something to do with it?

Pretty sure the free pack was a limited offer, you can still buy it though.

@Onetilburg013 yes. only if i am online and sing in.

yes. only if i am online and sing in.

You mean, You are signed in on Your Xbox One and are in the KI game?
You go to “skins”. There You should find 2 gold skin packages. Select Gold skin pack 2.
When You select it You will be redirected to the Xbox One store and You should be able to download it for free, if You have already activated Your Gargos Gold/Platinum skin code.
That’s how I got it about 1,5 week ago for free.

I can’t seem to find anything about a limited time offer in the original announcement:

Is a 3rd Gold Set coming out? I play Tusk and was hoping we’d get one of him.

That posted and me on photo.

Just so you know, there were a lot of people that had this issue that bought or had the physical DE edition during that time including myself and none of us were able to get that gold pack #2 for free like they stated. I even chatted with the xbox live help and they couldn’t help at all and there has been no answer on the official KI twitter nor here I believe.

This is one of the threads were others had issues only days after the announcemnt was made. So I don’t buy that “limited time” thing people are saying because that would mean they only let it last for 1-3 days max.

Hey there Trying to figure out if I'm doing something wrong I bought the definitive digital edition and I can play as Golden god and argent shroud colored Gargos but not as any other gold skinned character I can see the gold skins as an option but they are locked. I know the gold pack 2 was supposed to be free for DE owners and there was no extra code to unlock the Gargos skins for the digital edition. Do I still need to level up those characters to access the skins? When I go to the app …

Going one step further @rukizzel posted this on Dec 7th in the official news thread regarding skin packs, so I think there is something else going on that has not been addressed.

If you have redeemed the code for Gold/Platinum Gargos that is included with the physical/digital versions of the KI:DE, you will be able to download the Gold Skin Pack #2 for free when it releases on Tuesday, December 13th.
I know, this pack may not include everyone’s favorite fighters, but it is a small token of our appreciation for loving KI as much as you do.

Telling you all this here, now, before I figure out how I message this to the broader audience later."

Dafak! No sense. Thanks for the help sir.

ok. I try on ms help Center. Here @rukizzel and others don’t give a ■■■■ of interesting.

If the crimson shadow lords pak has an issue you probably won’t be able to find out about gold skins until they fix that as well. Patience over anxiety-

I’m still waiting for Kim was ultra rhythm to be fixed, and I’ve been waiting for months I even think some people can’t even load shadow lords since September!

Nothing new to report on this one, but the conversation is being had.

just sayng my problem and ask for help. and what take?
sarcasm? or ignore… thanks for nothing sir.

Hey guy he already said that he’s seen your issue and is working on resolving it. You just need to be patient. Being sarcastic and passive aggressive will not get you anywhere especially if you require help from said person.

They said nothing…
Take a beter look. Sarcastic? me? You look worng. Aggressive? a little!
REASON? read above…

Nothing new to report on this one, but the conversation is being had.

Doesn’t sound like nothing to me. Like I said you have to be patient, people occur bugs and errors all the time and the devs constantly work to fix them especially since as of last night with the whole crimson guardian error that had people spending resources without proper compensation they are a bit busy.