Killer Instinct: Definitive Edition on sale for $20 until November 28th

It will be crossbuy next month though. Might as well capitalize on the deal instead of paying full price next month.

I wouldn’t bet on it. in the end the DE on PC is perhaps a technically different title and a previously bought DE will still be only usuable on XBO. we just don’t know. the KI team doesn’t even seem to be aware of the issue and claims that PC players should already have access to the content, which is definitely not the case. so who knows if it actually works retroactively when it is finally released on PC and if that even happens in december.

They just gave me back the money

wait a minute, what do you mean this is not cross buy? any official source?
I bought it on xbox but it doesn’t give me the characters on pc

but some how I get a definite edition KI app on windows 10 that’s a 6gb download, but it crashes right away as it launches.

there is no official source. rukizzle just claimed recently that it should be crossbuy:

Not ambiguous at all. The DE is an app which does nothing more than launch content. That content is either KI, KI Classic 1 & 2, or the in-app experiences like soundtrack, bts vids, etc. So, in-app experiences are not available on PC at this time, but digital purchasers still get the cross-buy benefits of KI (game). (Classics have always and only been Xbox One, so that's why I am not counting them.)

yet so far no PC player has been able to get the content since the release in september. so it should according to the team, but it just isn’t. I don’t know what’s up with the DE app you’re talking about though. first time I heard of it being on PC.

I also purchased Definitive Edition to play on PC/Windows 10 and admittedly I was slightly surprised when the characters were not unlocked. Not sure whether to request a refund or pray that it works at a later date.

I cannot purchase any individual characters in-game, it just displays an error message. Perhaps it’s confused about which content I own?

The KI Hub is showing as available for download on the Windows Store, it’s a 6gb app and taking ages but I will try and launch it and report back.

apparently you can’t buy anything at the moment right now on PC. maybe they working on making the DE available for purchase on PC and messed things up.

can you maybe post a screenshot of this 6GB app? I only see the normal game in the windows store, this is all I got:

okay, interesting. looking forward to you reporting back.

Okay the program does open. It contains videos, various soundtracks (ogg format), artwork etc. Presumably all the bonus content from the XBox version.

The app name is: Microsoft.CorazonLauncher_1.0.2.0_x86
The download is almost entirely video (5.75gb) and I can’t locate any files for the original KI games.

The launch page implies I have the Definitive Edition and that it is PC compatible. 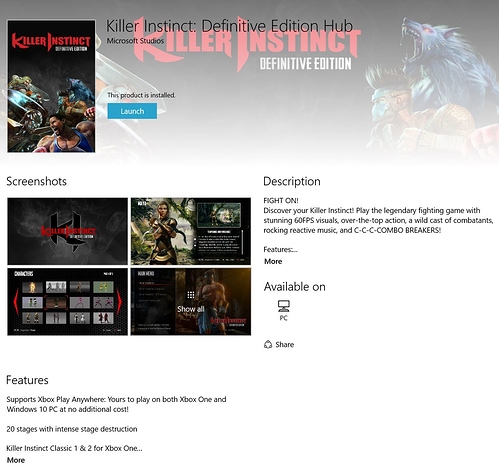 I guess you only see it in the store if you bought the DE. the actual game content is still locked though right? I guess what we see here is the preparation for the release of the PC version but it’s not actually happened yet.

I think it’s a very positive sign. At the reduced price I’m going to take a gamble and wait for it to be released properly

I thought you already have the DE? then I don’t undertand why you have access to the DE app?

Yes I just mean’t waiting for the main application to be updated so I can actually use the characters.

good to know. well I probably gonna risk it too thanks to your information. it’s a really good price. let’s hope we don’t have to wait much longer.

I was just looking through the windows store and guess what I found. an entry for the Definitive Edition with the announcement that it will be available on november the 30th at 7pm (UTC+1). so hopefully everything will work fine by then.

Why was the sale removed?

It’s not the 28th, and all the other items in the sale say that there’s 2 days remaining.

So as a PC player, do I still have any chance to get DE at 20 bucks? And if yes, how would I buy it? The spot that was presumably the one for DE just says “nil”.

for PC the DE will be launched on wednesday. so far it was never available in the ingame shop to begin with. the 4 entries you see there are the old packages you could buy so far (but have been disabled probably in preperation for the DE launch). it’s not known if PC players get a discount then. you could’ve bought it on friday though in the xbox store for 24 bucks. but at that point it wasn’t clear if the content even transfers to the PC (it doesn’t so far) and if this will be fixed. I wanted to risk it but I missed the opportunity cuz I assumed the offer stands until the 28th. but it was already gone on saturday.