honestly idk why i waited 3 weeks…i guess i just wanted to play a game i once loved…but yeah it works for me now as well too. ANYONE WHO SEES THIS, CHECK NOW IT PROBABLY WORKS. I HAVE BAD LUCK SO I THINK EVERYONE ELSE WILL BE A-OK

Lol. That’s why I tell most people to be patient. Happy to hear it’s working again.

GUYS THE KI IN WIN 10 IT’S FIXED (almost for me ) all you need to do it’s to update your windows, restart the pc, after the restart just play the game and test it

To be fair to these guys, this is the type of thing that should be so urgent to MS that they should fix it within 1 or 2 days at most. Having to wait weeks for a fix that seemed to affect every person who bought Definitive Edition on PC (probably thousands?), and amounted to basically taking their $40 with no product offered (the worst type of feeling for a consumer), is pretty inexcusable on MS’s end IMO.

I’m glad it’s fixed now though, and hopefully for everyone.

I just purchased the definitive edition a few hours ago unfortunately and even reinstalled the game twice, but nothing is unlocked for me ingame, just free week tusk. Hopefully I’m just missing something since everyone said there was a fix 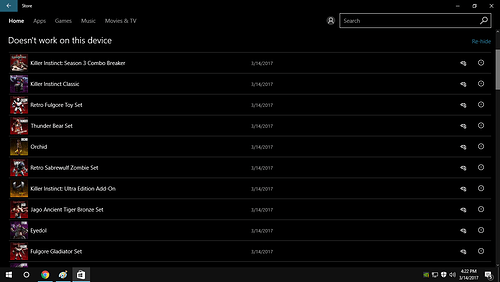 Are you on the latest Windows version? Check for updates on the system settings.

Yup I updated windows an hour ago. Reinstalled the game and everything. Nothing has worked for me so far. Don’t want to make a huge fuss over it. Just wanted it to be known some people might still be having issues like me
edit: I am stupid it is working for me. lol I had purchased the game on the wrong gamertag

I am so glad it’s fixed! I have been KILLING it!

It’s great that everyone is getting it to work, but I’m still getting nothing. I updated Windows, restarted my PC twice, uninstalled and reinstalled both base KI and the Definitive Edition, and signed out and back into my Microsoft account on the Store and the Xbox app. Anyone have any suggestions?

I also had Microsoft refund my money, but I still have the Definitive Edition. Would that affect anything?

Thanks a heap in advance.

You were right; it looked like I had all the content, but in actuality I didn’t. I was able to re-buy the DE in the Store and now all the characters are working (besides Kilgore, but we’re not supposed to be able to play him right?)