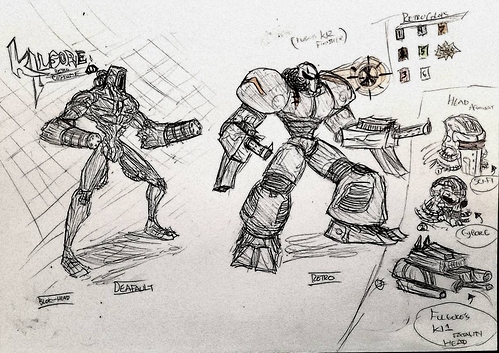 As the reboot to Killer Instinct came to an end, it was nice to see at least 3 more characters added to finish it off. Especially when 2 of them were very surprising to see, that being Thunder’s brother Eagle, and Kilgore. Who, Essentially is Fulgore’s KI 2 fatality turned into its own character. Which seeing how the game ■■■■ near had EVERYONE from both KI 1 and 2 already, this was a pretty cool thing to see. However despite this, Kilgore never got a retro costume that was the mentioned finisher, instead being stuck to his default “Prototype Fulgore” look. Which is fine and all, but seeing how Eagle got a retro costume, and then Thunder getting an extra one on top of it, seemed kinda unfair that Kilgore didn’t get his, especially when surley he was inspired by the original classic design in the first place. Bit ironic isn’t it?

So I decided to show what I’d imagine it would have looked like, granted it’s just a concept sketch, but I think it gets the idea across. I’ve also added some ideas for his colors and accessories, that being *Sci-Fi, *Cyborg, and *Fulgore’s KI1 Gattling gun head, simply because he’s already bulky as it is, why not go the extra mile? Give him missile launchers for hands too, why not…

Plus for his accessories, he’d have only his head and both left and right arms as their own separate accessories. This way you could mix and match his arsenal with different weapons for his hands. Like say the SciFi laser rifle on one arm, with a Cyborg Tank Nossel on the other arm. Just to add some visual style to the character, and to showcase him as a walking war machine.