Kilgore currently free. How long for?

Quick question, I asked the guys who run the @KillerInstinct Twitter the other week how long Kilgore will be available for, I was told until the 6th - I thought great, because I’ve had no internet for awhile and finally got it back yesterday, which was just in time before he disappeared. I’ve gone to buy him and he’s no longer on the store? I then read that he’s currently free in the rotation, when does the rotation end please?

Free does not mean free to own. It means free to play/try. So he’d only be available for a week before not being playable for free.

But since today is the 6th, I reckon that means the rotation is either over or near over. It seems he’ll be gone for good now, at least until they bring him back later for the reduced price.

Yeah, I wasn’t very clear, that’s what I meant. Just to try out, not to have for keeps. Well I read that the rotation is now every 2 weeks instead of every 1 week? So I wasn’t sure if it would change this week or not! I wanted to buy him. Oh well.

Thanks for the reply.

He will be back at some point. This is just some genius in a board room’s idea of how to create “value” to people who bought him early and supported the community fund. Hopefully they get the memo that none of us care if he is exclusive and they should just bring him back to the store.

I’m a KI supporter, who bought Kilgore in the moment he was avaible, supporting the scene with the 5$ extra

Now that Kilgore is no longer avaible, I’m here to say this: Make him avaible already. Making him unavaible to buy during KI cup(which is this weekend!!!) it’s a dumb move, and if someone sees Kilgore in the tournament and wants to give him a try(because he is awesome!), not allowing this person to buy him it’s just dumb. These people may not come back weeks/months/years later, whenever you want to make him avaible again. You will be losing costumers that may not come back.

I find it utterly ridiculous that he gets taken off the Microsoft store. I had this problem with Shadow Jago, I had to wait some time before he came back to the store. I wanted to play as him so much. I have bought all 3 seasons and I have supported this franchise for the last few years when I got into it. I just don’t understand this… Oh well.

I believe he’s in the free rotation until tomorrow, so I’ll just give him a go tonight. I was willing to pay for him…

Thank you for the replies.

Lol, “for added value.” Rather take a direct kick in the gut, cause that’s how it feels with this marketing strategy.

It’s no fun if others can’t enjoy him. I understood why Shago was exclusive, but this one was odd.

They said that Kilgore will be available for 5 in March. I assume he will be back for purchase after KIWC.

They said that Kilgore will be available for 5 in March.

I believe you, but can you point us to where this information was revealed? Because I haven’t seen it.

I want to say it was a stream with Keits, but I can’t remember. The only reason I remember that he will be released for that price was, because I was thinking "now people can’t stop complaining about him being 10

Yeah, I’m certain he will return for $5. I’m less certain of the timing for his return.

If he is not for sale during the KIWC, or immediately after the KIWC, it’s ridiculous and they will have lost many sales. The whole point of this game being a free-to-play title is that people can download and then buy the content they want. If someone new to the game downloads the title for free, and wants Kilgore, and he’s not available, then they’re going to question the entire model and probably just move on to another game. Those that stick around until he’s available will be rare, especially with today’s choice in fighting games to go play. To be honest, even releasing it immediately after will cost them sales. Some people might want to check it out on Saturday after a long day of cool KI matches.

And then, even if they do bring it back the next week after KIWC, it begs the question why they even took it down in the first place. What do they gain from a week off the store? They don’t need a week to change the price. No, I think they’ll need to take it off the store for a decently prolonged period of time (measured in months) for them to make sure all us valuable loyal customers get whatever perceived “value” they think we’re getting.

… man. I really can’t believe they’re pulling a character off the store during the weekend of the world championships for the game. Maybe it was opposite day at MS when they made this decision and then they forgot to reverse it after the joke wore off?

You’re not wrong. I work very hard to not be critical of the developers since it’s impossible to know what they are dealing with. What follows is utter speculation, but I have seen this kind of decision be made and it almost always involves a well meaning but hasty and uninformed decision by someone of authority. Usually at the tail end of a long meetingthat no one really had time for in the first place but was crammed in right before something important. Most of the folks involved know better, but through a combination of limited access to the busy decision maker, other issues that they need to spend their time and personal capital on, compartmentalization (i.e. That’s not my department), and fear that critical feedback will have negative consequences, no one is willing to step up and say “Hey guys, we got this wrong and we just need to take care of it.”

Edit: okay, N.azi is censored. I can understand why that would be, but I’m just curious, in the context of the above would this be offensive? I tend to use this phrase a lot in conversation to evoke someone who is a stickler for following the rules to the letter , but maybe I’ve been offending people all these years…

Edit: okay, N.azi is censored. I can understand why that would be, but I’m just curious, in the context of the above would this be offensive? I tend to use this phrase a lot in conversation to evoke someone who is a stickler for following the rules to the letter , but maybe I’ve been offending people all these years…

This guy would be ashamed 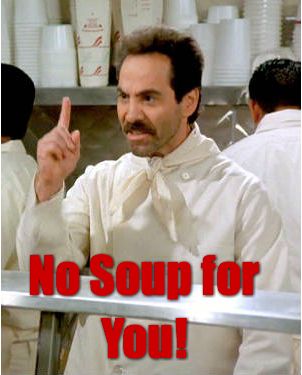 Yeah, but… Kilgore is just a character in the game. Jago never went off the store for a period of time in order to please people who bought him before a certain date. The only difference is Kilgore came with a mandatory donation to tournament pots, but it doesn’t seem to change the fact that he is just a character available for purchase in the game otherwise. I can’t even imagine what type of wacky policy would be evoked for this case.

I think your first guess is much closer to correct, especially since Rukari came into another thread and said it was a value proposition (which is the type of thing that could get said at a meeting like you described), and it’s a real shame.

I believe you, but can you point us to where this information was revealed? Because I haven’t seen it.

I am sure they lost sales due to the 10 price tag.

I’m glad I’m not the only one who thinks this is ridiculous. I will buy him when (or IF!) he comes back but if they continue with pulling this crap, I won’t be buying in the future (or I could get the new characters before they disappear for months, that works)

Also I’m sure the people who run the official Twitter page told me the wrong date.

I think this is in anticipation to Shin Hisako release. The value created is not for Kilgore but for her, because now chances are she may be unavailable at some point and you will have to buy her now or try the odds of this happening.