I love KI, it’s my most played fighter in years and we can thank double helix and definitely Iron Galaxy, but I feel like KI isn’t being given the same treatment as other Xbox main franchises such as Halo or Gears. I was wondering how cool it would be to have a team dedicated to just the KI franchise just like 343i for Halo or the Coalition for Gears, why not UltraTech Entertainment? That name would be killer.

You mean like NetherRealm right? Microsoft would have to buy and make Iron Galaxy a 1st party developer then rename them. I think that’s how it goes?

After Season 3, we will see how important KI really is to Microsoft. I know we all think it’s crazy huge.

Instead of Iron Galaxy we could call them…

I agree with Microsoft needing an internal studio to develop the Killer Instinct IP but I don’t agree with them being dedicated to developing one game. There is a lot of talent at 343i and Coalition just to have them focus on just one IP.

I actually think dedicated studios per franchise are a poor idea.

They are, in theory. The problem then becomes stagnation and the want to do something more. (ex. Bungie leaving MS to make Destiny) If IG gets a good deal out of it, (more backing, advertising, and keep their current freedoms) I could see it being a boon in the short term (about 5 years, maybe more).

This one has my vote.

Agreed. Being stuck on one project would be horrible, unless it’s literally an entire team of hardcore fans that could become a studio to specifically work on one game. There’s no way that a single studio would be created to develop just for KI. Unfortunately, KI isn’t banking millions of copies/sales consistently, so they won’t invest that money. I’m happy with the treatment they’re giving the game though. IG has done well, DH were incredible, Mick Gordon was 1 in a trillion super talent find that almost made it seem like he was born for that purpose, Ultimate Source has been handed the reigns to create figures that we’ve wanted for decades, and the dedicated MS staff that has been on the project from the start are incredible <3

Of course it isn’t. While it’s a really good and competent game, it simply doesn’t bring as much money as Halo and Gears, games that are staples of Xbox. That might change in S3 with PC port and all, but it is still gonna be leagues away from those games.

I think one of the things I forgot to bring up is how these single franchise companies really need to insure a standard of quality in each installment in the franchise otherwise both the company and game series die off and that’s both a positive and negative, and it also encourages spinoff games like Halo Wars or Mobile app games.

I don’t think Dave Lang would sell IG to MS. He was a former MS employee himself. IG seems like a company that wants to grow on itself. IG even tries to publish indie games.

MS does have internal people who work on KI who I think should have an inside studio name and grow just incase something happens to IG like it did with Double Helix. MS created all of the art and design for the characters in Season 2, they should hire the company that did the original for Season 1. The ones who made this, which apparently was revealed it wasn’t DH. 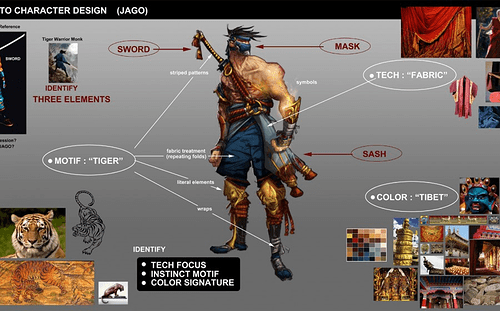 The ones who made this, which apparently was revealed it wasn’t DH.

Well, who ever it was, made one of the most Badass characters in KI!