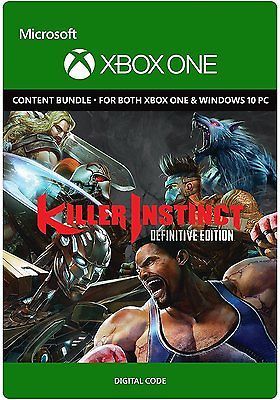 thanks for trying to clarify the situation, but I still don’t really get it. please bear with me here. so if I understand you correctly the expected behavior is that PC players do get the characters if they bought the digital DE? because until now multiple users here in the forums claimed that they bought the digital DE and still didn’t get any char on PC (codename4711 being one of them). which makes me wonder if it is an issue that was fixed or if this is the way it is supposed to be and one has to wait for the PC release of the DE for it to work.

I’d love to finally start with the game and get me the full package but as long as this remain an unclear situation I’d rather wait then spending 40 bucks and test it for myself.

You will get everything the DE stated, except the app that launches the bonus extras. So characters, modes and game content itself will be available on PC, just not the extras.

Just curious, has anyone that has purchased the digital DE tried to download KI on PC ( not the DE version) and play it?

I noticed in @YOSHi112 's pic it showed KI included in the bundle…has anyone tried to download the components of the bundle and see if it works?

I have, no dice. Shows my stats from testing the game on an Xbox One, but with only Jago (From unlocking him) and whatever character is on rotation. Appreciate it though, any ideas help while we wait!

Yeah, I’ve been playing KI mostly on PC ever since that version came out, so when it comes to stuff like the DE issues I haven’t had to deal with it, and that makes it hard to figure out what might be causing issues for others.

sure that’s the theory. in practice though I haven’t heard from a PC user where this actually works.

that picture is from the XBox section of the store since the DE isn’t available in the windows section to begin with. since on PC you’re supposed to buy the content in the in-game store, there aren’t any additional components you could download aside from the main game.

Because it isn’t going to be compatible until they push the update which is coming around Holiday season, still a couple weeks away.

which was my latest state of knowlede but this contradicts what rukizzel was saying. according to him the extra content of the DE launcher app will become available later on PC (since it’s not ported yet) while all the actual game content should be accessible right now.

which was my latest state of knowlede but this contradicts what rukizzel was saying. according to him the extra content of the DE launcher app will become available later on PC (since it’s not ported yet) while all the actual game content should be accessible right now.

Which it absolutely is not. I own DE digital and nothing is available on PC.

Rukizzel’s comment is confusing. He really does make it sound like the characters should be available now, and the extra content later. Which would be awesome! That’s fine. But it isn’t the case. Nothing is available on PC right now if you own DE digital.

Maybe he meant that the Xbox One version is just a launcher app, and that PC users will get all the in-game content in the future, but the in-app experiences will not be available.

I don’t think anyone is really expecting that content. We just want to be able to use the characters/skins/etc. At the least.

Also it’d be nice if Xbox 360 stick support was fixed… That would be a plus too.

that’s what I thought, thanks for the confirmation. so it’s back to the waiting game. hopefully we’ll see a PC release next month.