Where are you going Han Solo…

This will be like the 5th spinnoff announced, I don’t want to go as far say that they’re milking a franchise but is this really necessary?

Is this joke or serious?..

I would freakin’ LOVE a movie starring Jabba the Hutt, the strange aliens that he keeps close, and the Hutt crime family.

If there’s anything that Episode 7 & Rogue One have done an absolutely crappy job of, it’s showcasing weird and fun new aliens in the Star Wars universe. 98% of the new aliens are either fuzzy “blink and you’ll miss it” appearances out of the corner of your eye, or people wearing black and brown beekeeper outfits.

As a KI fan, it’s almost a requirement to appreciate bizarre creatures, so the Cantina, Jabba’s Palace, the Mos Espa Podrace, Geonosis Arena, and other locales of the Star Wars films that feature gobs of imaginative aliens is my cup of tea. A Jabba-centric movie would allow me to forgive how poorly done the aliens in the past two films have been portrayed.

If there’s anything that Episode 7 & Rogue One have done an absolutely crappy job of, it’s showcasing weird and fun new aliens in the Star Wars universe.

I think this is just a Hollywood bias thing. While they like having creatures to run around and make an interesting background, they think capturing human emotion and reactions to scenarios is more interesting and relatable than a slug monster, a bug guy, or a 30ft tall Transformer.

I could see a Godfather style movie with Jabba rising to power in his family.

I think that Disney is trying to focus on human-everything at the moment, but that’s just not Star Wars. Take Rogue One for instance:

I was SO hyped when this preview popped up on YouTube before the film hit theaters, because it looked like they wanted to showcase that the SW universe isn’t 99.999% human, as they did with Force Awakens. I even went out to buy the “Moroff & Shoretrooper” 2-Pack because I wanted the badass alien freedom fighter that I was about to see on the silver screen on my shelf. 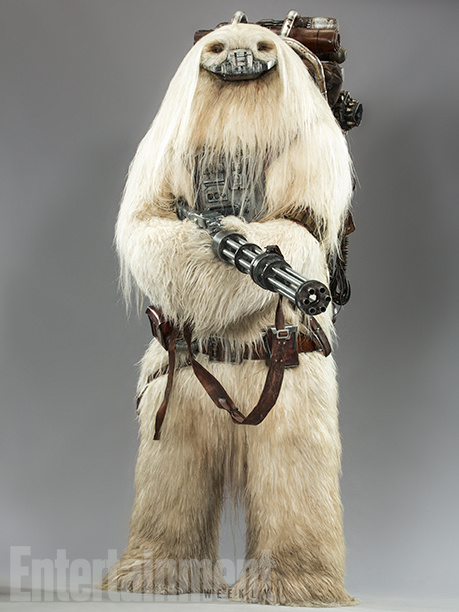 After watching it, (and it was by far the better of the two Disney SW films!), the only standout creature moments were the nicely done Mon Calamari rebel scenes, and the brief moment where Bistan, the alien monkey, was screeching and blasting Imperials from his U-Wing.

My white shaggy pal that was so prominently showcased in the lead-up to the release? Viewers could barely see Moroff in a tiny part of Rogue One during the firefight in the streets of Jedha. Lame.

The difference between how Disney utilizes aliens & the 1-6 method is simple: traditionally, we get a lingering look at each strange alien or creature as we move along through the story, but in the Disney films, they exist, but in the corner of your eye, in a purposely blurred out manner to focus on the human heroes, or cut from the film entirely. The Cantina freaks are so iconic because we can take a moment to linger on each freak to emphasize that we’re in a shady, bad place full of weirdos. Nearly all of the cool stuff in the RO preview is blink and you’ll miss it material, and that’s why my hopes for Episode 8 are low, and a Jabba movie would be perfect for me.

Still bothers me so much that people do such amazing work to make aliens for a flipping Star Wars movie, but it’s all humans, all the time. If I wanted that, I’d watch… anything else.

I think that Disney is trying to focus on human-everything at the moment, but that’s just not Star Wars.

If you ask me, They’re intentionally taking things real slow and playing it overly safe simply because of how poorly the prequel trilogy was received. They seem to feel like they have something to prove, and it’s likely they’re wanting to make sure they don’t unintentionally create another Jar-Jar. Personally, I want to give them the benefit of the doubt for at least a couple more movies before complaining about too many humans, but that’s just me.