Look I love KI, its Loud and Gawdy, and thats part of its charm. We get to play rediculous characters that were seemingly designed by middle school kids. Its dumb fun.

But it really could use some atmosphere, and Visually I feel the new lighting might have made some backgrounds look nicer, but all these extra reflections and lightsources are a visual mess, and Im actually starting to get a headache from the game which rarely happened in the first two seasons.

Its incredibly detailed, and runs super smooth which is great. I just dont think the lights help this game as much as it could have. Tusk for all the details he has , still looks Plasticine and flat, as if he just walked out of an old console game. you can basically see his texture map… The fur on his gauntlets are so aliased and pixelated ,it reminds you xbox is only running on 720… But the problem is the majority of the background visuals in game can seem so pixelated that its pretty jarring.
Somethin that you can ignore before, but not with this new lighting just showing you every texture imperfection.

Probably the reason my favorite stage , which is Thunders (aside from the amazing rain effect ) is that the background is basically one huge image that is slightly out of focus, and soft… gives the stage a real sense of space.

Thats all these visuals need, is alittle blur… not a lot, but just enough to make it feel as there’s a spacial distance between foreground, main stage and background objects. It might help alleviate this harsh self illumination that just makes the whole game feel like a steroid Ps1 game… That what this look reminds me of, the first tomb raider.

if you look at the profile pictures of each characters within their backgrounds,(during survival) the artist created a nice blur with edge lighting around the character to really bring it out… Im not sure if bluring would hurt the framerate, but it would definitely make the characters stand out more, and cover up those horribly aliased alpha textures back there.

Anways love this game, its always been alittle hard on the eyes, just seems more so now. 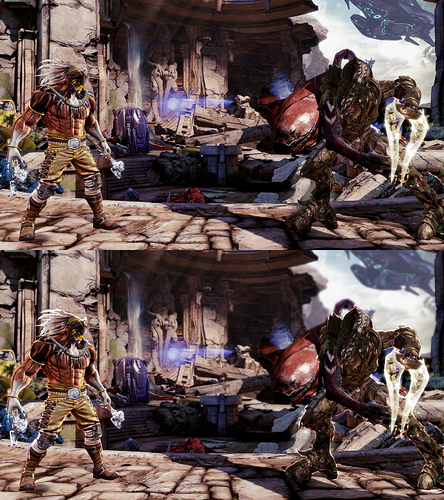 apologies for the quick and dirty mock up, but smart lasso in photoshop couldnt distinguish the characters from the backgrounds

First of all, I’d like to say that I’m inclined to agree with you. A blur effect helps create the illusion of distance and depth, which is nice (BTW, did you do the whole image, or is it just the part where you can see the ships in the far-off sky through the hole in the wall? I ask because that’s the only place I can see the blur).

While the lighting has done wonders for many of the stages (in particular, I love how Glacius’ stage is no longer so bright), I do find the added detail bad for the eyes and a bit distracting. I find Arby’s stage terribad for this, as there’s an entire battle going on in the background, especially if someone is playing Arby himself - with carbine shots and plasma grenades being thrown in the background, it can almost work to his advantage. I can’t tell you how many times I would react to a plasma 'nade in the background thinking it was my opponent throwing his… SIGH

i used different degrees of blur . the only thing that isnt blurred are the characters and the flooring they are standing on.
in movement it would be even more obvious I believe

funny you mention that because I mistakenly blurred the arbiters plasma grenade in that shot.

Okay, I see it - I just didn’t click the image a 2nd time to make it bigger.

It would take some work, but the devs could implement a layering system to do this too - kind of like your image above, but more detailed. Simply put invisible walls (that don’t have to be perfectly straight - they could mesh and flow with the direction of the background itself) at different distances going from the background to the foreground. For each wall, the blur affect steadily gets more noticeable, because whatever’s behind it is further away. The illusion of depth of field is created and helps lessen any distractions in the background that may occur from the foreground, much like you and I both want. This, despite the blur, would actually serve to make the game look much, much better - much like the changes in lighting did.

Using your image as a template, you could leave everything in the foreground (the characters, anything related to them, the floor, and anything related to that) in focus because that’s where the real action is. Then the next layer would be the walls on the far left of the stage. The 3rd layer would be the purple barrel and the ground it seits on. The 4th layer would be the wall behind that. Then the 5th and final wall would be anything behind that wall (like the sky when the wall breaks down). As objects or characters pass through each layer from 5 to 1, they simply come more and more into focus (for example, when the banshee comes crashing down through the roof as part of the stage ultra, you’d see it come into focus as it passes through each layer.

Another idea is to have kind of like a “zone” of sorts instead of having layered walls. Within the zone, which would basically encompass the whole stage, there would be a numbered system that covers the width of the stage. For each number or certain amount of distance, the blur gets steadily stronger (from front to back). For example, the blur gets 1 level stronger for every 3 feet into the background or zone.

There’s a term for the wheel you are reinventing: a post-process depth-of-field effect. It can look sweet, for sure, but it might present performance issues for Killer Instinct on Xbox One.

While definitely not simple, I’m wondering if it could be faked… the examples you’re showing are for FPS games where you move in and out of spaces and the blur would have to adjust… this is a set stage for a game that works on a 2d plane.