So I figured we might as well get a thread going for our Shadow Lords High Scores.
I recently finished my first post-launch run and actually did really well.
853964, Second Place Wordwide on Normal
I know, just Normal. But I’m still pretty happy with it. 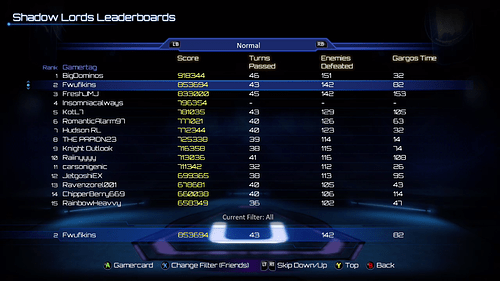 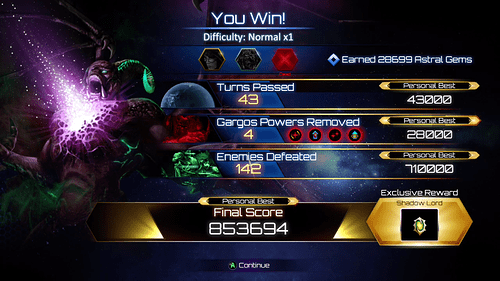 I was 4th yesterday. Thanks for the score update. Now I don’t need to leave SL mode to look

Holy cow. 43 days! Congratulations. You have far more patience than I to make it that far in the mode.

So what does the Exclusive reward does? That thing at the bottom right corner that you received.

No idea. I’m saving it for my Astral Plane run. I’m still messing around in Normal so I’m not gonna waste it.

But what’s its description?

Shadow Lord: “Grants the Power of a Shadow Lord… Power you could only dream of”

Obviously it’s something REALLY good. I’m just not going to test it until I have a reason to.

Two possible outcomes :
-It’s a 5 rounds buff, good to kill Gargos
-Lasts all the run, a waste using it only for Gargos

In any case, I anticipate it increasing corruption somehow

It’d be nice if it gave you a handful of Gargos buffs… Or even the buffs that you’ve knocked off of him…
Perhaps the item only has power if you’ve fully debuffed him… Or its true power comes if you use it when he’s at full power, allowing you to steal ALL of his acquired power…

Though we’re getting kinda off topic

Use it in Gargos

Maybe you get his sl moveset!

I thought about that. Maybe it gives a different buff to each character.
Wulf gets Season 1 Dashes and Damage, Sadira gets unbreakables back, Eyedol is always in instinct, etc

Today is my turn

number 1 on the normal leader board

How do you get the Shadow Lord reward?

Pretty sure it drops each time you defeat Gargos, or maybe just kf you get a certain score.

If it says anything, I really wasn’t trying to place on the leaderboards. I was honestly just trying to see how long I could hold out. Plus I was saving up my astral gems for a killer pack. The leaderboard placing kinda took me by surprise.