Help zipstar out if you can

Some people may know zipstar and unfortunately he’s in a bit of trouble for a mistake he made almost a decade ago. They’re trying to send him away for some trouble he got into. I know zip and he’s a very good man. One of the nicest people I’ve met in the community and he wouldn’t ask unless he really needed help. Far as I know 8k is needed. If you can help please try as the man really doesn’t deserve this.

Go to paypal.me/Curtis354 and type in the amount. Since it’s PayPal, it's easy and secure. Don’t have a PayPal account? No worries. Getting one is fast and free.

I agree here. I met Zip at the first KI World Cup. Outside of what he’s done for KI - streaming, character breakdown videos, attending offline and online tournaments, hosting online tournaments, putting Omen on the map, placing top 8, hosting local meetups, Zip is a good guy. He’s always happy to see you, has a positive attitude, solid work ethic, loves his family, and is always helping others whether on the job, outside of the job, or here in the KI community. Helped me out on the first day I met him, and has to this day been one of my Austin KI buddies. We all need help from time to time. If you can, lets help this man stay with his family at home and here in the KI community.

What kind of mistake would cost $8k today (10 years later)? I’m all for helping other people out when they need it. I just like to know what my money is being used on.

Um, jail? I’m not trying to be an arse or anything, but there’s literally zero context here and I don’t know who this person is.

Now if you don’t mind me asking, what exactly did he do that caused him to get into trouble with the law judging by your explanation and overall post especially?

If I tagged you in this post, I first want to apologize for consuming some of your busy day but I wanted to share this news personally. I know many of us don’t know who Hollywood Zipstar is (Curtis Jones), but i have known him for some time in the Killer Instinct community. He’s been one of the most ACTIVE and hype supporters of Killer Instinct in a long time. Unfortunatley he’s a victim of his own past mistakes. While he’s been supporting the game and traveling to KIWC 2017 and CEO 2017, he’s had court fees that he needs to pay in order to resolve his problems from over 10 years ago.

While no one is obligated to help him, I want to say that this is an individual who has been good to me and everybody he speaks to in this community. He is a dude that wants to see not only this game but ppl who play it succeed. He has a family of a wife and 2 kids and is supporting them the best he can. he works ABSURD WORK HOURS in order to support his family and sometimes he can’t be with his kids the way he wants.

If anything, please help him, a dollar, 2 dollars, 5 dollars, any amount you think is beneficial. please help him. I’m tired of seeing good men not given a second chance because they lack the opportunity, GIVE HIM THAT OPPORTUNITY. I know i will…

I’m very familiar with the injustice of the legal system, so I am absolutely willing to help, but not without a full story.

@SnuggleGator @NitricZenith @KIFANATIC8488 look guys. . . .i get it, you don’t know this man. It’s logical to put into quesion whether or not he’s viable or trustworthy. While i am knowledgeable of his mistake in the past i won’t disclaim for his own privacy.

Imagine, every time he wants to sign up for a job, on that application it states he made that mistake and he can’t get a job? everytime you want to use your right as an american citizen, it is revoked? i’m not saying you have to trust in him, nor feel comfortable with not knowing what he did. 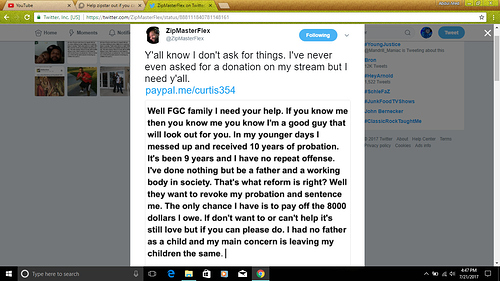 However im not asking you to forgive what sins he’s done, im asking you to look at this man and imagine how you’d feel if a father has been dedicating his life to pay his debt to society and his family. 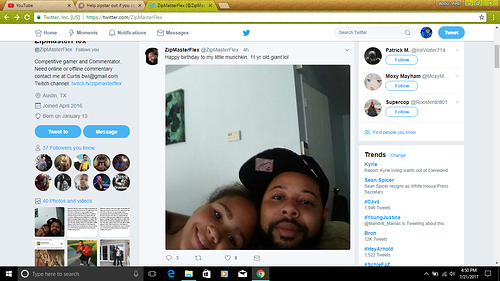 His daughter turned 11 today, while i hate myself for saying all this mooshy gooshy stuff i can’t let another (im getting personal here, forgive me) black man get wronged by a system that doesn’t favor him.

@ItzTymeToDul i respect your compassion and willingness to help this man out, the world needs more guys like you in it. however, i am unable to throw any money down because i myself have my own problems atm and i got my own mess to clean up. we all make mistakes, and its unfortunate his past sins have come back to haunt him for it. i wish him and his family the best

Zip is a dope guy, and I can sympathize with him and especially with his children. Not having a dad or having yours taken away feels horrible to say the least. However I’m a kid myself and just don’t have any money right now. I can share this around to get as many people to see this as possible and wish him the best. I really hope this works out for him.

I don’t know him personally, but I know OF him and trust the judgement of those that vouch for his goodness. I understand and am sympathetic to both victims of injustice w/in the criminal justice system, and people who erred in their youth and have grown from and past it. I can’t say whether or not he falls into the former category, but from what I understand he does fit into the latter.

I have troubles of my own, very expensive and time consuming troubles at that. That said, I’ll do what I can, even if it’s very little. I will keep him and his family in my prayers.

From what he told me before it was theft related I believe. I didn’t ask for many details. Either way I’ve seen people go down for things they shouldn’t. I got to know this man personally and wouldn’t have bothered with this if I didn’t believe him. He’s also not relying exclusively on this. He’s trying himself to find ways out of this. I didn’t have much either. But simply spreading the word was able to help out.

How in the hell does your PROBATION get revoked after 8 years of a 10 year probation?
He must have violated his probation in some way.
Call the system in-just or broken…but I do not believe that for no reason whatsoever after 8 years they just said “changed our mind! give us 8 grand or go to prison!”

I wish I could help but my family needs help ourselves. My fiancee just lost her job at the hospital after 11 years. So all I can do to help is share the post on facebook.
I wish him the best. HE seems nice

That’s fine. I hope things go better for you and your family soon.

This here is probably what happened guys…being that it may involve theft. When you get probation for theft, you have to pay for the items lost or damaged…Restitution. If you dont pay it or fall behind they can revoke your probation.
(Im not saying this is what is happening, but it could be a similar situation)

Revocation of Probation or Probation Violation
The D.A. may file a motion to revoke your probation for non-payment of restitution. After they file the motion, the court holds a hearing to decide whether to revoke your probation. The violation case will likely have more severe consequences than the contempt of court or collection case. Any deal you made with the D.A. is now gone. You can face up to the maximum time of incarceration and the maximum amount of fines for your original charge. With some technical, minor exceptions, the judge is required to subtract the time you have already spent incarcerated and the amount you have already paid in fines from your penalty.

I understand people wanting to know more about his situation and know that they’re not funding a degenerate so they can continue being a degenerate without consequence, but, and this is a really big but, ask yourselves if you were in his shoes how would you want you to respond?
People need second chances.

Anyway, I didn’t send him much…$10, but I would hope if I were ever in need due to illness or a situation similar to his that the community would pull together and help me out as well. And that’s why I did it. I’m not trying to guilt anyone into emptying their wallets or anything, do what you want. I just wanted to say what I did and why. I hope everything goes well for him.

I wish I could help, but it’s very difficult for me right now.
I really hope he can overcome this situation. Best of lucks for him and his family.